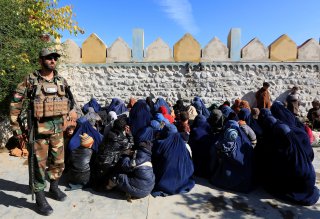 Tensions between the United States and Iran put a strain on the U.S.-Iraqi cooperation against ISIS and “accelerated” a plan to withdraw U.S. forces from the country, military officials told U.S. government inspectors.

U.S. forces deployed in Iraq began to pull out of their smaller bases in March. Combined Joint Task Force Operation Inherent Resolve, the U.S.-led counterterrorism coalition, downplayed the withdrawal at the time as a “long-planned” move that was not related to tensions with Iran.

But coalition officials admitted to a U.S. government watchdog that “greater force protection concerns” related to the fight with Iranian-backed forces “accelerated the timing of the transfers,” a new Lead Inspector General report released on Wednesday said.

U.S. forces are deployed to Iraq and Syria as part of the international war against the Islamic State (ISIS) militant group, but the Trump administration has leaned on them to counter Iranian and Russian influence in those countries as well.

Tensions with Iran have caused the coalition to “prioritize force protection” over the fight against ISIS, and “probably sowed doubt” within Iraqi forces over their relationship with the coalition, U.S. military officials told the Lead Inspector General.

The most recent outburst of fighting happened in March when Iranian-backed militias killed two U.S. troops and a British medic in a rocket attack.

The coalition had been forced to suspend its training of the Iraqi military after a series of clashes between U.S. forces and Iranian-backed militias within Iraq in December and January.

President Donald Trump responded to the December crisis by ordering the killing of Iranian spymaster Maj. Gen. Qassim Suleimani in January. (Iraqi militia chief of staff Abu Mahdi al-Muhandis was also killed in the incident.) Iran retaliated by firing dozens of ballistic missiles at a U.S. base in Iraq, injuring over one hundred U.S. troops.

“Restoring deterrence is not static. It is a daily habit, and you’ve got to get that habit as part of your system, so we everyday look for ways to get Iran to go back to its own borders,” Brian Hook, the State Department official in charge of Iranian affairs, said at a February event.

The Iraqi parliament responded to the Suleimani killing by asking U.S. forces to leave the country, forcing a pause in coalition operations. Operations have resumed, but not to “pre-pause levels,” coalition officials told the Lead Inspector General.

The coalition added that Iranian-backed militias are not interfering with the Iraqi military's fight against ISIS as they are “both working toward a common goal of the enduring defeat of [ISIS] and preventing [its] resurgence,” although they have threatened U.S. forces.

Strangely enough, U.S. forces have also begun to move back into Syria as part of their drawdown from Iraq, after making the opposite move in October 2019, according to the inspector general report.

It is not clear whether ISIS is in a position to take advantage of the weakened coalition presence.

U.S. military and intelligence officials told the Lead Inspector General that ISIS is waging a “low-level insurgency” and “lacks the capabilities to sustain elevated attack levels over several months.”

However, the militant group still controls thousands of fighters.

“We are seeing ISIS come back as an insurgency, as a terrorist operation, with some fourteen to eighteen thousand terrorists between Syria and Iraq,” Amb. James Jeffrey, the U.S. envoy to the coalition, had said at a press conference on January 30.

“We are pursuing what we think is a smart policy—a very limited American military presence for the very specific goal to go after ISIS, supporting military operations of other countries in various ways, Turkey, Israel,” Jeffrey added at a May 12 event at the Hudson Institute. “This isn’t a quagmire. My job is to make it a quagmire for the Russians.”