German Politics: From Boring and Stable to Unpredictable and Volatile 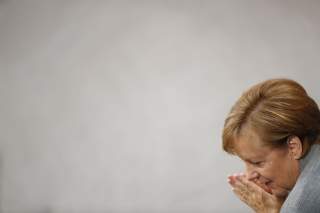 Two months ago, German Chancellor Angela Merkel won an underwhelming election victory. Her opponents lost more than she won, but observers still expected her to put together a new three-party coalition to replace the shopworn “grand coalition” with the Social Democrats. But coalition talks collapsed dramatically Sunday, and the most predictable of political systems headed into the unknown.

The September poll was a disaster for the two traditional governing parties, the Christian Democratic Union (its sister party, the Christian Social Union, runs only in Bavaria) and the Social Democratic Party. Both suffered their worst result since the nation’s founding in 1949 as seven parties entered the Bundestag. The CDU/CSU received barely a third of the vote. Many of its traditional conservative voters backed the Alternative for Germany, which collected almost 13 percent. The AfD ran against mass immigration—about one million refugees entered in 2015—and reflected the cultural alienation of many voters.

The CDU/CSU refused to work with the AfD, while the SPD refused to renew the grand coalition, which had sapped its ability to establish a separate identity while competing with Merkel’s party. That left the so-called Jamaica coalition, the CDU/CSU, Free Democratic Party, and Greens, whose party colors matched those of the Jamaican flag.

It was never going to be an easy coalition. The CDU/CSU was determined to reassert its conservative bona fides, especially on immigration. The FDP had been the CDU/CSU’s partner many times, but failed to meet the 5 percent minimum vote in the last election and lost all of its Bundestag seats. Under new leadership the liberal (in a European sense) party backed freer markets and lower taxes. The Greens were split between leftists and pragmatists, and pushed a program that conflicted with many positions adopted by the Christian/Social Democrats and FDP.

How to square the political circle was not obvious. The Free Democrats joined with the CDU/CSU in wanting to restrict immigration; Merkel’s party could acquiesce to the FDP’s push for tax cuts. Green demands to accept refugee families, close coal power plants, expand reliance on expensive, unreliable renewable energy, and strengthen the European Union proved particularly vexing. After the parties missed Chancellor Merkel’s self-imposed deadline, FDP leader Christian Lindner walked out of the extended talks, explaining that “It is better not to rule than to rule falsely.”

What happens next is anyone’s guess. Merkel will meet President Frank-Walter Steinmeier, tasked with nominating a chancellor candidate. Merkel could beg the SPD to reconsider its refusal to join the CDU/CSU, but the former’s leaders reaffirmed their position after Lindner’s walkout. The Social Democrats have steadily lost votes and see another term as junior coalition partner as a likely political death sentence.

The CDU/CSU could form a minority government, perhaps with the FDP or Greens, which would require cobbling together a majority on every vote. That would enfeeble Berlin both domestically and internationally and force informal reliance on the AfD. In theory, the SPD could lead a coalition, but it won’t work with Die Linke, a hard Left party, or former Communists from East Germany. Or Steinmeier could call a new election—which likely would deliver a similar result, leaving the parties no closer to forming a stable government.

Or, and so far no one is discussing this possibility, the CDU/CSU and FDP could create a coalition with the AfD. The centerpiece would be a reduction in immigration/refugee admissions.

Joining the AfD is not a good solution, but there is no good solution. The pledge not to work with the AfD has two indirect but potentially dangerous consequences. The first is to make Germany seem ungovernable. Since the political center has fragmented, it is hard for either of the two major parties to form a coalition with anyone but each other. However, grand coalitions feed resentment by reinforcing the status quo and suggesting that voting changes nothing. A second election would be no better if it merely replicated the results of the first poll.

Moreover, keeping the AfD out of government gives credence to its criticism of establishment politics while insulating it from responsibility. The party doesn’t have to deal with the challenges of governing. Although the party includes ugly strains of nationalism and xenophobia, it is not a fascist party, let alone Nazis reborn. A stint in government might tame the movement and limit its popularity. Indeed, similar parties in countries as different as Austria and Finland lost ground after entering government: they were forced to make the compromises that inevitably come from coalition rule. If Berlin instead cobbles together a parliamentary majority based only on antipathy toward the AfD the establishment parties risk increasing the Alternative’s appeal.

In Germany, as elsewhere in Europe, the political center is collapsing. Four years ago Germany’s two main parties received nearly two-thirds of the votes. This time they barely gained half. Equally worrisome, “responsible” conservatives no longer define the acceptable right of the German electorate. The AfD has emerged to the Right of the CDU/CSU.

So far the populists are not dangerously extreme, but the AfD nevertheless remains a malign force. Yet ignoring and isolating the AfD is unlikely to defeat the movement. Especially if doing so makes it harder for Germany to create a stable government majority. And while Germany’s population appears to remain resolutely bourgeois, there are few certainties in politics today.

After spending years resting in Frau Merkel’s supposedly reassuring hands, German voters opted for change. As a result, German politics is interesting again. And because Berlin is the continent’s most populous and prosperous nation, what is happening there is important beyond Germany’s borders.

Germany isn’t yet headed down the destructive path of some of its neighbors. But the latest challenge facing Berlin demonstrates the depth and seriousness of Europe’s political divisions, and the necessity of new thinking to combat new challenges.

Germany’s established parties might have to engage their nation’s political extremes to tame them. Otherwise the established parties seem likely to fracture further as the populist tide rises higher. In which case the future could take a turn back toward an ugly past.