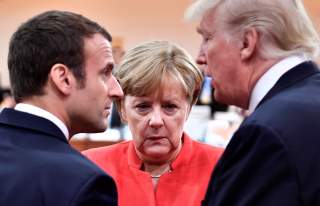 DURING DONALD TRUMP’S presidential campaign, it seemed impossible to predict what kind of foreign policy he might pursue once in office. On the one side, there were the portents of radical change: Trump lauded Vladimir Putin and criticized allies from Angela Merkel to Enrique Peña Nieto. He called NATO obsolete and railed against free trade. There was reason to think that a President Trump would steer an isolationist course, undertake radical changes to American alliances and attempt to dismantle the liberal world order.

There were also signs of continuity, however. After some of his most radical statements, Trump would claim that he had been misunderstood. It was NATO’s strategic focus, not the alliance itself, that was obsolete, his team would assure reporters. He was not opposed to free trade but simply in favor of fair trade, he would explain. On the whole, the impression that lingered was, more than anything else, one of radical uncertainty.

This has not really changed since Trump moved into the White House. The president has continued to make laudatory statements about Putin—yet seemingly avoided forging closer ties with Russia. He has continued to criticize American allies—yet failed to act on those criticisms. Finally, he has expressed support for dictators like Abdel Fattah el-Sisi of Egypt and seemingly accepted that Bashar al-Assad would stay in power in Syria—only to bomb Assad’s troops a few days later. For now, uncertainty and unpredictability remain the hallmarks of American foreign policy in the age of Donald Trump.

For countries like Germany, whose safety has long depended on America’s military might and strategic reliability, this is a glaring wake-up call: They need to rethink their foreign policy from the ground up.

For decades Germany has, for all intents and purposes, outsourced its own security to the United States. While the Bundeswehr would have made a significant contribution if Germany had come under attack, it was clear that the country’s security ultimately depended on NATO and the American nuclear umbrella. With Trump casting doubt on his willingness to come to his allies’ defense, and potentially willing to accommodate Putin, Germany’s security is therefore looking less secure than ever.

And yet Germany’s small and cohesive foreign-policy community seems to be choosing the course of maximal inaction. While concerns about the implications of Trump’s ascent run deep, most German politicians, civil servants and think tankers have sought to maximize continuity with the policies of the past. The dominant approach has been to wait and see. And so even those lone voices that call for change envisage reforms that are in the realm of the miniscule: according to one senior member of Germany’s timorous foreign-policy community, the right response to Trump’s rise is to revisit a recent policy paper that advocates closer cooperation with France in matters of border security and the sharing of biometric information. According to another senior member, it is to equip the member states of the European Union with better tools to tackle cybersecurity.

The absence of proposals for real change has been most striking in the area of military policy. There would seemingly be good reason to expect that a country would scramble to beef up its own defenses when a friendly superpower that has long guaranteed its security calls into doubt its willingness to protect erstwhile allies. There would seemingly be even better reason to expect increased military spending when the new president of this superpower has repeatedly linked his willingness to continue defending the country with its willingness to spend a substantial portion of its budget on its own defense—something the country has failed to do for many years. And yet Germany seems to be doing nothing of the sort.

On paper, Germany is committed to spending 2 percent of GDP on its military by 2024. But the current budget, announced with much pride and fanfare, only raises military spending from 1.12 percent to 1.18 percent—a rate of increase that barely puts the country on track to meet its target by 2030. Even that seems unlikely. As Sigmar Gabriel, Germany’s foreign minister, put the point at the latest NATO summit, it is “completely unrealistic” that Germany will spend so much of its budget on the military: “I don’t know any German politician,” he said, “who would claim that is reachable nor desirable.”

THERE ARE good reasons why German foreign-policy makers are determined to maintain a close relationship with the United States. Since World War II, the erstwhile enemies have built a close relationship that includes both a formal political alliance and strong personal links. As a constitutive part of the wider transatlantic partnership, it is one of the many building blocks of an international order that sets global norms, provides public goods and protects human rights. German politicians thus see their close alliance with the United States both as a cornerstone of their foreign policy and as a key contribution to a stable regime of international norms.

What’s more, Germany’s relationship with the United States is deeply bound up with the country’s self-perception. In the postwar era, Germans went from seeing defeat at the hands of the Allies as a catastrophe to viewing it as a liberation “from the inhumanity and tyranny of the National-Socialist regime.” They also saw their economy boosted by the Marshall Plan, West Berlin defended in the airlift and Soviet expansionism contained by the promise of American arms. Chancellor Konrad Adenauer, a Rhenish nationalist, viewed Prussia as a bad dream from which a spanking new Germany, shorn of its eastern territories, could emerge. The nation-state was out; Westbindung was in. As a result, the country’s political elites have not only come to see America as a vital ally for strategic reasons. Rather, they also see their partnership with the United States as an important testament to the country’s embrace of democratic values and its political orientation towards the West.

The reluctance to ponder a radical change to German foreign policy is therefore owed in good part to a laudable desire to preserve the transatlantic relationship. And yet the very desire to rescue the transatlantic relationship and preserve liberal values should now push Germany to rethink its foreign policy in a much more radical way than has been seriously entertained in the past months.

In the new environment, Germany can no longer count on the United States for its own defense. A major rethink is thus not only in the interest of Germany, but also in that of other liberal democracies across Europe. Germany’s commitment to the United States has always been a commitment to a liberal world order. With the supposed leader of the free world less committed to that order than any predecessor in living memory, Germany’s commitment to these values would best be expressed through its willingness to do more to fight for them independently from the United States. This is by no means an abstract concern: Russia has already breached the territorial integrity of Ukraine and Georgia. An increase in German military capacity is urgently needed if Russia is to be deterred from going on similar adventures in the Baltics or in central Europe.

Even more importantly, it may seem as though a wait-and-see attitude is much more likely to preserve Germany’s relationship with the United States than a sudden determination to become more autonomous. But the opposite comes closer to the truth. For if Germany increases its ability to defend itself, and to come to the assistance of other liberal democracies around the world, it will be less tempted to strike an alliance with autocratic regimes in Russia or China in an hour of need. Conversely, if Germany does not take the necessary measures to become militarily self-sufficient, the United States turns out to weaken its commitment to NATO and autocratic regimes continue to project their force, the country could suddenly find its foreign policy subject to blackmail. Faced with threats from Moscow or Beijing, a weak Germany would have strong reasons to take a neutral role between East and West.

LIKE HIS predecessors, Donald Trump has called on America’s allies to make a bigger financial and military contribution to NATO. Unlike his predecessors, he has suggested that his willingness to honor the mutual-defense pact may be conditional on their willingness to pull their weight. This sea change gives European countries two superficially contradictory yet ultimately complementary reasons to spend heavily on their militaries in the coming years.

First, a rapid increase in military spending by European countries would maximize the chances of holding together the Western alliance. Since Trump is less guided by shared values than former presidents, the relative military prowess of his European allies is going to play a much larger role in his decisions about how to treat them. If Europe wants to keep Trump invested in the Western alliance, it must do all it can to strengthen his incentives to keep them on his side.

Second, the same tactic that helps to keep the Western alliance together in the short run can also double as a strategy for making European countries better able to provide for their own defense in case such efforts ultimately prove futile. Given radical uncertainty about America’s future course, making a plan for a future in which the alliance with the United States can no longer be taken for granted should be at the top of the agenda of every European leader. And though it largely goes unspoken, the ultimate upshot of losing America’s shield would be obvious: Europe would then need enough military strength to provide for basic forms of self-defense on its own.