Greece Is the Weak Spot in Post-Caliphate European Counterterrorism 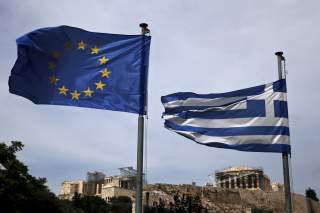 The Islamic State’s territorial caliphate was crushed nearly a year ago when the Global Coalition to Defeat ISIS liberated Baghouz, the militant group’s last sliver of territory in Syria. The impact of returning foreign terrorist fighters in the wake of this territorial collapse has turned out to be lower than many observers had feared, with no terrorist attacks on European soil linked to militants fleeing the caliphate in the past year.

Yet there are grave concerns that some fighters may be biding their time. Due to a number of factors—including porous borders, high levels of corruption, and growing radicalization and Islamist extremist activity in the country—Greece could prove to be a hub for foreign terrorist fighters on the lam who are seeking to plot attacks in Europe.

Other important variables make Greece a candidate for foreign terrorist fighters to take advantage of. For one, the country’s weak security forces’ attention could be drawn to prominent non-jihadist threats, including left-wing anarchists or right-wing fascists. Another concern is that for a country like Greece that has long battled left-wing terrorists, the security forces may be too narrowly focused on that threat, leading them to overlook or downplay the presence of jihadists. A similar issue was seemingly a factor in the April 2019 Easter bombings in Sri Lanka, where the security forces had fought Tamil separatists for so long that they struggled to recognize the emerging threat posed by jihadists with links to ISIS.

The unfolding migrant crisis that has paralyzed Greece over the past several years, combined with a shaky economy and rising populism, means that jihadists simply might draw less scrutiny than they would elsewhere in Europe. This is particularly true if militants are not directing their ire at the Greek state, but instead using the country and its links to the rest of Europe to plot, plan, and organize attacks.

Greece has frequently served as a gateway for foreign fighters to move throughout Europe. During the height of the terror group’s ability to launch strikes into Europe, Greece served as a key transit point for French and Belgian ISIS fighters—as well as a logistical hub for plotting.

Abdelhamid Abaaoud, the chief architect of several attacks in Europe, hatched a plot to strike Verviers, Belgium, out of an apartment in Athens. The members of his cell transited through Greece before the devastating Paris attacks in November 2015. French returnee Ibrahim Boudina also transited through Greece in 2014 before returning to France with the intention of carrying out an attack. Also in 2014, a French returnee named Abdelkader Tliba attempted to transit through the central Italian port of Ancona, a major reception point for migrants traveling from Greece around that time.

Greece and the Balkans are also hubs for stolen and falsified travel documents, and it is possible that foreign terrorist fighter returnees will use these countries to procure false identifications. According to the former director of EUROPOL, Rob Wainwright, “there is a whole subset of criminal activity and a criminal sector that is involved in stealing passports and producing sophisticated passports and supplying them to the criminal market.” At the epicenter of this criminal activity is Greece. In February 2018, members of Greece’s organized crime squad arrested eleven members of an international criminal network involved in the theft and falsification of travel documents. The network profited from moving third-country nationals from Greece to elsewhere in Europe.

Greece is especially attractive to would-be terrorists because of its geographic proximity to the Syria-Iraq battlefield and its long land and maritime borders. A 2015 report suggested that hundreds of individuals with links to jihadist groups could be in the country, though where they are today is anybody’s guess. In 2017, Turkish police claimed to have disrupted well-tread smuggling routes through Greece and Bulgaria, though intelligence officials in the region believed at the time that some of those routes remained viable.

The image conjured when discussing an ideal terrorist sanctuary is a remote and largely lawless country like Afghanistan, where Al Qaeda enjoyed a safe haven for years as it grew its network and planned attacks worldwide. But a country like Greece could, in fact, be the ideal locale for individuals and small cells of militants. There, they could take advantage of the country’s connection to the licit financial economy, and its modern communication and transportation infrastructure.

Greece has been dubbed the “soft underbelly” of the European Union for terrorists looking to infiltrate the continent. Disorganized extradition policies, overwhelmed courts and penitentiary systems, and ineffective prison policies all leave space for some returnees to be overlooked.

As ISIS fades further from the headlines, there is a risk that the group will look to demonstrate its virility by launching an attack on European soil. If it succeeds, then it is certainly possible that the plot could be facilitated, or at least have connections and linkages back to, southeastern Europe and the Hellenic Republic.

Daveed Gartenstein-Ross is the chief executive officer of Valens Global, and the author or volume editor of over twenty books and monographs about terrorism and sub-state militancy.

Colin P. Clarke is a senior research fellow at The Soufan Center and an assistant professor at Carnegie Mellon University’s Institute for Politics & Strategy.