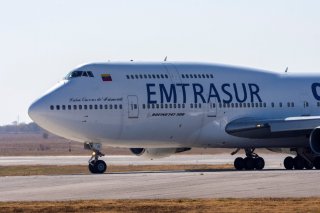 Iran is preparing to supply Russia with more advanced weapons, including surface-to-surface missiles, according to Western officials. The Biden administration should respond by leveraging existing U.S. sanctions and designations against Iran’s aviation sector, which plays a key role in weapons transfers to Russia.

The U.S. Treasury Department could target companies acting as intermediaries for sanctioned Iranian entities, such as Mahan Air, which are involved in the procurement and sale of aircraft and component parts. Targeting intermediaries, their officials, and the financial institutions they rely on should be part of a broader effort to incapacitate the part of Iran’s aviation sector implicated in sustaining Tehran’s weapons’ airlift to Moscow.

The recent case of Emtrasur, a subsidiary of the Venezuelan state-owned and U.S.-sanctioned Conviasa, offers a blueprint for further action.

On June 6, Emtrasur’s only Boeing 747 cargo plane landed in Buenos Aires. Local jet fuel companies concluded the aircraft was on the U.S. sanctions list and refused to resupply it. Without fuel, the airplane remained stranded in Argentina. Local authorities then launched an ongoing investigation into the plane and crew. It was the crew’s composition that raised suspicion. Corporate records and media reports indicate that its captain, Gholamreza Ghasemi, was at one point a board member of Iran’s Fars Air Qeshm, a cargo airline operated by Mahan Air. Fars Air Qeshm, also sanctioned by the United States in 2019, has been involved since 2017 in weapons transfers to Syria and, more recently, to Russia. And records found aboard the plane show that Emtrasur flew to Moscow at least once since Russia’s invasion of Ukraine.

The Argentinian investigation quickly determined that Emtrasur’s plane formerly belonged to Mahan Air. Its transfer to Venezuelan ownership constituted a violation of U.S. sanctions. On that basis, on July 26, the U.S. Department of Justice announced an international warrant to seize the plane. The cargo aircraft, still stuck in Buenos Aires nearly five months after landing, is likely to never fly again for Iran or Venezuela.

Yet more can be done on this front. The Emtrasur plane is not the only aircraft Mahan transferred to Conviasa. As part of the judicial process, lawyers for Emtrasur submitted the sales agreement for their cargo plane into evidence, revealing that Conviasa had in fact bought three more aircraft formerly owned by Mahan Air, alongside six engines and a maintenance contract for parts and service.

It is therefore possible that Iran’s previously owned fleet of aircraft now under Conviasa’s stewardship are also part of the effort to resupply Vladimir Putin’s weapons-strapped army.

Nicolás Maduro’s regime in Venezuela sought to prevent further U.S. attempts to seize its other aircraft. Days after the Emtrasur aircraft became stranded in Argentina, Conviasa suspended its flights from Caracas to Santiago, Chile, and to Buenos Aires, fearing that more planes might run the same risk of seizure.  The Chilean parliament subsequently launched an investigation into the Conviasa flights, as local police authorities revealed that at least ten Iranians had entered the country as crew members of the Conviasa Caracas-Santiago flights.

Conviasa no longer flies to Buenos Aires or Santiago, but two of its former Mahan Air aircraft – currently identified with tail registration numbers YV3533 and YV3535 – still visit numerous other destinations, including frequent flights to Iran and Russia, according to data obtained from the commercial flight tracker FlightRadar24. What happened in Buenos Aires with the Emtrasur cargo plane could happen in other airports if the Biden administration revived the type of diplomatic outreach with private companies the United States pursued under presidents Barack Obama and Donald Trump, and convinced fuel suppliers to deny service to Conviasa.

Exhibit one could be the sales contract that Conviasa produced as evidence in its so-far unsuccessful effort to release its aircraft from Argentina. The contract shows Conviasa bought its planes, engines, parts, and maintenance services not from Mahan, but from a Dubai-registered company called Lance Tech Trading LLC, which acted as an intermediary. Conviasa’s lawyers likely hoped that by showing the seller was not Mahan they would convince Argentinian authorities the plane was not subject to U.S. sanctions. Instead, they provided conclusive evidence that Mahan and Conviasa used a Dubai-based cutout to evade U.S. sanctions, a practice Mahan Air relied on multiple times in the past to obfuscate large procurement transactions. The difference is that past operations used intermediaries to buy aircraft and parts; this time, Mahan is selling its aircraft, parts, and maintenance services for hard cash, earning money to continue its logistical support and arms supplies to Russia on behalf of Iran’s Islamic Revolutionary Guard Corps.

The Biden Administration has already identified Lance Tech Trading as a Mahan intermediary in the affidavit in support of the international seizure warrant. Corporate records show the company has an Emirati and two Iranian nationals as shareholders. The company does not have a history of sales and procurement in the aviation sector. As U.S. court records show, Lance Tech “is involved in the tourism industry” – likely a reference to one of its Iranian shareholders, the CEO of an Iranian travel and tourism company with subsidiaries in both Dubai and Tbilisi, Georgia. Despite a lack of track record in the aviation sector, Lance Tech processed a deal worth more than €54 million, as indicated in the sales contract Conviasa submitted into evidence during the Argentine proceedings. The Biden administration should sanction Lance Tech as well as the banks involved in facilitating transactions for the aircraft sale.

The case of Emtrasur also provides a blueprint for how the Biden administration can exert more pressure on Iran for supplying Russia with weapons. Tracking intermediaries involved in the procurement necessary to keep the Revolutionary Guards-linked cargo fleet in the air means disrupting and incapacitating their ability to sustain the ongoing airlift to Russia. Case in point: Fars Air Qeshm’s two airplanes, both old Boeing 747s the airline bought through an Armenian cutout, have been grounded for months, likely due to maintenance issues.

Targeting banks that transact payments for arms deliveries is also likely to create pressure. Finally, the Biden administration could replicate the Emtrasur case through quiet pressure on companies that sell the fuel at airports where Iranian cargo also flies.

Iran’s airlift does not rely on a massive fleet. The Biden administration’s sanctions arsenal can make a difference. The case of the Emtrasur cargo plane shows the way.

Emanuele Ottolenghi is a Senior Fellow at the Foundation for Defense of Democracies, a non-partisan research foundation based in Washington, DC.