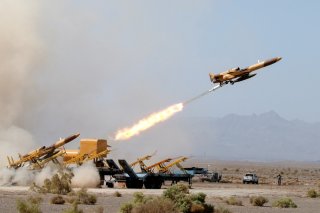 The Iranian government denied reports on Tuesday that the country had sold combat drones to Russia for use in its ongoing invasion of Ukraine—even as Ukrainian officials circulated pictures and video footage depicting Iranian drones allegedly captured during the conflict.

Nasser Kanani, a spokesman for Iran’s foreign ministry, claimed in a statement that Tehran would remain neutral in the conflict and would not directly support either side through arms sales, explicitly denying reports that it had sold drones to the Kremlin.

“The Islamic Republic of Iran considers the reports about the delivery of UAVs to Russia for use in the war in Ukraine as unfounded and does not confirm it,” Kanani said, according to Iran’s state-aligned Mehr News Agency. “Since the start of the conflict, we have always declared our principled and clear policy, which is based on active neutrality, and our opposition to war and the need for a political solution to the conflict.”

Although reports that Iran had sold drones to Russia have circulated since August, the Ukrainian government announced on September 23 that it had revoked the credentials of the Iranian ambassador to Kyiv and “significantly reduced” the number of Iranian embassy staff in response to a Russian attack on the port of Odessa allegedly conducted with Iranian Shahed-136 drones. Although the Shahed drones are intended as suicide drones, a different Iranian drone was captured intact following the fighting. The Ukrainian defense ministry posted its picture in response to Kanani’s statement.

“Recently, in response to a note from the Ministry of Foreign Affairs of Ukraine, the ambassador of Iran stated that his country has not supplied drones to [R]ussia,” the Ukrainian defense ministry wrote. “Here is the Iranian drone Qods Mohajer-6, which was launched to coordinate an attack on Odesa a few days ago.”

Drones have played a significant role in the Ukrainian conflict. In the first months of the war, Ukraine’s Turkish-imported Bayraktar drones were credited with destroying hundreds of Russian vehicles and blunting the Russian army’s attack on Kyiv. Although the Bayraktar has faded in prominence as the conflict enters its seventh month, the United States and other NATO countries have provided Kyiv with other drones, notably the “Switchblade” and “Phoenix Ghost” kamikaze drones.

Iran has remained neutral in the Russian invasion—notably abstaining on a resolution in March condemning the invasion while neighboring Syria openly supported Moscow’s position. However, Iranian officials have maintained close security ties with the Kremlin and publicly blamed NATO for provoking the conflict through its eastward expansion. However, Kanani appeared to deny in his statement that Tehran would recognize the result of Russia’s “referendums” annexing eastern Ukraine, claiming that the government “emphasizes the necessity of full respect to the principle of other countries’ territorial integrity as a fundamental rule in international law.”