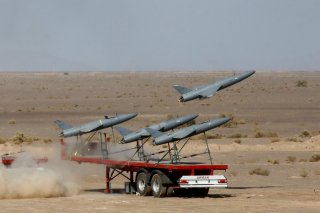 The first shipment of Iranian military drones has reportedly left for Russia.

U.S. officials said Russian cargo planes carrying “at least two types of unmanned aerial vehicles” departed from Iran on August 19, according to a report by the Washington Post. Officials added that the transfer was complicated by technical problems, with the drones reportedly experiencing “numerous failures” during tests conducted by Russian officials. “There are a few bugs in the system,” an official told the Washington Post, adding that “the Russians are not satisfied.”

The shipment of Mohajer-6 and Shahed-129/191 unmanned aerial vehicles, which can conduct strike as well as surveillance missions, is expected to be the first in a series of Iranian drone deliveries to Russia. The Russian military possesses a relatively large inventory of surveillance and reconnaissance drones. Officials say the transfers from Iran are intended to help alleviate the Russian defense industry’s mounting deficit in attack drones, which is being exacerbated by component shortages stemming from the Western sanctions regime.

A security official told the Washington Post that the deal was negotiated by Brig. Gen. Seyed Hojjatollah Qureishi, the head of the Iranian Defense Ministry’s supply and logistics department, and Russia’s military attache in Tehran. U.S. and allied officials assessed earlier this month that Russian operators have undergone training in Iran on how to use the new drones. Iranian experts previously traveled to Russia to help set up the systems, according to the Post.

The White House warned in July that Iran is preparing to send several hundred military drones to Russia. U.S. officials assessed that Iran could also help Russia evade Western sanctions as part of a broader agreement between the two countries to deepen their financial ties. Politico reported last week that Tehran could enter into a “swap” arrangement with Russia, importing and refining Russian crude oil for domestic use whilst selling equivalent amounts of crude in Iranian tankers on Russia’s behalf. If the Biden administration succeeds in renewing the Iran nuclear deal, abandoned by former President Donald Trump in 2018, the Iranian oil exported under this potential scheme would be exempt from sanctions.

Kremlin spokesman Dmitry Peskov dismissed the Washington Post story as fake on Tuesday, according to Russian state media. Peskov did not immediately clarify which aspect of the report he was disputing. “As for our relations with Iran, they are developing dynamically, they were developing before, they are developing now and will continue to develop,” he added. Neither Moscow nor Tehran has formally confirmed the reported drone transfer arrangement.