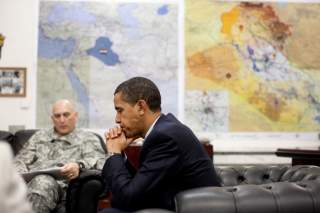 Forget about speeches—foreign-policy crises define a presidency. Memorable speeches resonate because they are built on acts of real leadership. Conversely, failure washes away the most resounding rhetoric.

Which is why the unraveling of Iraq will define Obama's tenure at the top much more than his recent address at West Point.

After listening to Obama's speech to the graduating cadets, Fareed Zakaria wrote in The Washington Post that the president's leadership was characterized by "battling a knee-jerk sentiment in Washington in which the only kind of international leadership that means anything is the use of military force." Obama, he concluded was more like Eisenhower, "a strong leader who refused to intervene in the Suez crisis, the French collapse in Vietnam, two Taiwan Strait confrontations and the Hungarian uprising in 1956.” That was a comparison that could only be made by detaching rhetoric from reality.

True, Ike proved reluctant to use the military on some occasions. But other times, he sent in the troops, including dispatching 5,000 Marines to Lebanon. What defined Eisenhower's presidency was the prudence he observed in using military might—choosing the force of arms when it was the appropriate tool.

Obama is no Eisenhower.

This president has not been "reluctant" to use force. After all, more combat occurred in Afghanistan under Obama than Bush. Obama jumped into a war in Libya. He wanted to bomb his way into the Syrian conflict. He has dispatched troops to hunt terrorists in North Africa and conducted far more covert warfare than Eisenhower.

On the other hand, almost none of Obama's clashes of arms reflect Eisenhower's prudence in the use of force. The future of Afghanistan after six years under Obama looks bleak at best. The war in Libya ended badly. War in Syria rages on. The reach of Al Qaeda, according to a recent report from RAND, has grown over Obama's years.

Eisenhower's measure for when to use military power was determining what was best for defending the nation's vital interests. Further, he believed the nation needed a strong military—not one outsized for the task, but one fully capable of protecting the nation's interests if it was called to arms.

Obama believes military might is peripheral to power and is fungible—it can be swapped out for diplomacy and dialogue almost at the president's whim. Further, Obama's metric for the use of force primarily reflects his aversion to allowing his foreign policy to incur political risk.

Where the consequences offer little danger, the president fits comfortably in the role of commander in chief; when there is danger and uncertainty, the president is less certain. In many cases, such as his "surge" in Afghanistan, he often opts for half-measures—the course of action that will allow him to fend off criticism that he is doing too little, without opening himself up to the charge that he is doing too much.

No misuse of military power on the part of President Obama is more stark than his mishandling of the U.S. role in Iraq. By the time Obama took over levels of violence had plummeted. Al Qaeda had been decisively routed. The government functioned.

The United States left because the president wanted to leave, hardly making a serious effort to negotiate for a stay-behind American force that could have helped sustain peace and progress. Pulling the troops out was an imprudent step.

Obama lacks Eisenhower’s judgment about how to best use military force. And he has scant respect for military power as an integral part of America's legitimacy and stature as a great power.

But that is not our president's biggest problem. His problem is that he also isn't the man Eisenhower replaced in the Oval Office.

Unlike Eisenhower, Truman had little practice in the use of armed force (other than his combat experience as a captain during WW I). When Truman entered the White House, he faithfully tried to follow through on President Franklin Roosevelt's utopian plan for implementing the end of World War II in a manner that brought an "end to all wars."

Truman quickly found the Soviets an unfitting partner for a new world order, but he was unsure how to respond. The "Truman Doctrine" was an ad hoc expedient to dealing with the crisis of Greece potentially falling to Communist rebels, clothed in high-sounding, but vague rhetoric.

But then Truman got slammed (albeit unfairly) with the label of "losing" China to the Communists in 1949. When Communists invaded South Korea in 1950, he found his backbone and decided to fight. He pulled NSC-68, a proposal that called for reversing the dissolution of U.S. conventional forces, out of the draw he had hid it in and ordered a rebuilding of American military power including sending four U.S. Army divisions to reinforce NATO. Ike built on Truman's strategy of containing Soviet power.

Today, Truman is widely regarded as an admirable foreign-policy president. He learned from his mistakes and changed course, gaining a more realistic appreciation for American military power and its purpose.

But Obama is no Truman.

The Obama Doctrine has demonstrably failed to serve the president well. Yet, despite reversals in virtually every theater, the president continues to assert that he has "reestablished" American leadership.

But even as Obama may be facing the fact that he will go down in history as the president who "lost Iraq," rather than a president who changed course (like Truman did), he still seems to prefer to put his faith in his own rhetoric.

That has to change. The White House must make a concerted effort not to lose Iraq and the rest of the region along with it. The United States needs to triage its Iraq policy. It has to keep the government in Baghdad and the Kurds in the fight to save their country. The United States should not cut any deals with the Iranian regime (which will never be a constructive force in the region). The United States must talk serious "turkey" with Turkey and get both countries on the same page on regional-security matters. America should also do what it can to keep Jordan stable. Once the bleeding is stopped, the administration can start on a more long-term strategy to recover all the ground it has lost in the last half decade.

At the same time, the administration has to stop gutting U.S. military power and inviting another round of aggression against U.S. interests.

Whether after the bitter reversal in Iraq, Obama will finally opt for action over rhetoric remains to be seen.

If the president lacks the wisdom of Eisenhower to know how to prudently use military power, and lacks the courage of Truman to learn judgment on the job, how this president acts in harm's way shows us very much what kind of president he is not.