Head-To-Head: Russia, Japan, South Korea, and China Face-Off in the Skies over the Pacific 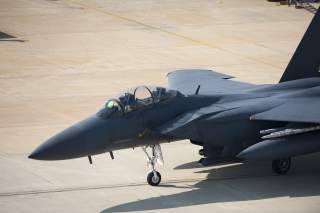 The South China Sea cauldron has been at a full boil now for nearly a dozen years, chiefly over the significance of various obscure reefs and rocks. But, thankfully, the occurrence of shooting among the claimants and external powers has been extremely rare, underlying the obvious risks that such a course would entail. Thus, it came as a surprise to many that South Korean interceptors fired warning shots at a Russian military aircraft over the Sea of Japan on the morning of 22 July.

With four major powers suddenly appearing to lock horns in that same dispute, the incident would seem to be further evidence of the “great unraveling” in the world order. Indeed, the episode is bizarre in numerous respects, not least because the Russia-South Korea dyad has been one of the least conflictual in this volatile region over the last decade. In fact, as a symbol of these strengthening ties, President Moon Jae-in took the unusual step of making the long trip to Moscow to meet with President Vladimir Putin last summer. Moreover, the dangerous aviation encounter last week had the similarly strange effect of, at least temporarily, stealing the thunder from Pyongyang’s recent missile tests that were apparently intended as “a warning to South Korean warmongers.”

Undoubtedly, the most crucial elements of context to understand here are: on the one hand, this was the first-ever Russia-China long-range aviation joint exercise; and on the other, the incident occurred proximate to the island (Dokdo/Takeshima/Liancourt Rocks), a feature that is quite bitterly contested by both South Korea and Japan. These two U.S. allies have long witnessed major tensions over history and now are locked in an ugly trade dispute. Perhaps it was also not coincidental that U.S. National Security Advisor John Bolton was just arriving into Seoul from Tokyo the day after the aerial scrap unfolded.

A CNN report quotes officials in Seoul stating that a Russian A-50 airborne warning aircraft twice crossed through the territorial waters of the disputed island group, home to a small South Korean outpost. That analysis concludes with reasonable logic that the “islands may be just the wedge Moscow needs to further splinter the United States' most important security relationship in Asia.” It quotes Russian national security expert Artyom Lukin, from Far Eastern Federal University in Vladivostok, offering that the Russia-China joint air mission was “bold and provocative.” It could be worthwhile to dig a little deeper on Russian perspectives regarding this disturbing set of events.

Two rather detailed articles in the Russian newspaper Kommersant [Коммерсантъ] fill out the picture a bit further. It explains that the air mission was conceived with the dual purpose of supporting the evolving Russia-China military partnership, but also with the intention of “strengthening global strategic stability [укрепления глобальной стратегической стабильности].” The author pointedly notes that both the Chinese bombers (H-6) and the Russian bombers (Tu-95) are capable of carrying nuclear payloads. This Russian news article is quite candid in reporting: “According to a military-political sources for Kommersant, the joint maneuvers are designed to ‘probe the reaction of forces in the Asia-Pacific region’ [По словам военно-дипломатического источника ‘Ъ’, совместные маневры были призваны ‘прощупать реакцию сил в Азиатско-Тихоокеанском регионе’].”

Another article in the same Russian newspaper asserted that South Korean media was falsely claiming that it had received an apology from Moscow and ran under the headline “Russia did not apologize for the aircraft [Россия за самолеты не извинялась].” Indeed, the former article quotes the Commander of Russia’s long-range aviation forces, General Sergei Kobylash as follows: “The actions of the South Korean aircrews must be regarded as aerial hooliganism [Действия южнокорейских экипажей необходимо расценивать как воздушное хулиганство].” This article cites the Russian Ministry of Defense’s claim that the Russian aircraft never approached closer than 25km from the disputed feature. It notes the assertion by the South Korean side to have fired “20 flares … and 360 warning shots,” but does not confirm this key detail.

A Russian military expert additionally published an analysis in the newspaper Izvestiya [Известия], arguing that Russian aircraft did not violate any rules or norms when flying in other countries’ Air Defense Identification Zones (ADIZ). The author explains that as unilateral declarations, they do not have a basis in international law, but have become quite popular since the 9/11 terrorist attacks against the United States. It is further asserted that even the U.S. Air Force routinely ignores the ADIZ of other states. Russia, it is explained, has not created ADIZ along its borders, but “does not hesitate to dispatch fighters in order to meet foreign intelligence agents” in the skies. The problem, according to this analysis, comes if “accidents occur when planes maneuver too close to each other, demonstrating their daring or trying to exert strong psychological pressure on an opponent [случаются аварии, когда самолеты маневрируют слишком близко друг к другу, демонстрируя свою лихость или пытаясь оказать сильное психологическое давление на оппонента].” Of course, the ADIZ issue is rather separate from the issue of territorial waters (and airspace) surrounding the islet—the main point of contention from the South Korean point of view.

Are there winners and losers from this awkward and untimely set of circumstances? Perhaps. Russia appears as the perennial stumbling bear, possessing some military heft to be sure, but unable to deftly handle complex and vital relationships, such as that with South Korea. Seoul has also been damaged from the episode. The hawks might feel good about demonstrating South Korean airpower, but many will consider this episode as highly reckless and not conducive to regional peacemaking. Japan is also slightly diminished by these events, left on the sidelines to sulk. Diplomats in Tokyo seemed resigned to protesting Seoul’s muscular approach toward Russia—an awkward position to be sure.

North Korea could actually be the prime beneficiary from the incident. Only Pyongyang really profits from the growing tensions between the other Northeast Asian powers and most assuredly has not liked the obvious coziness between Seoul and Moscow that has developed over the last decade. China likely has also benefited, and not only from the further blossoming of Japan-South Korea contradictions. Beijing’s military activities look comparatively more professional than Russia’s, but China does not mind the company of “Crazy Ivan” to gain intelligence and experience, secure its flanks, and draw away adversary attention. It seems quite conceivable that the actual prime motive behind this new set of missions for Beijing may well be to socialize China’s neighbors to a future in which a new generation of Chinese bombers range far and wide on a consistent basis.

And what of the U.S. role in this incident? That remains a mystery, but one may speculate. A well known Russian military expert on the Asia-Pacific is quoted in the first Kommersant article discussed above, explaining that Seoul’s reaction in these circumstances was quite possibly a riposte against the increasing stature of the Russia-China quasi-alliance. Perhaps, that same Russian expert observes, the rather brash gesture of firing warning shots at a Russian military aircraft was even undertaken “at the request of American friends [по просьбе американских друзей].”

Let’s hope that was not the case, but anyhow, welcome to the “New Cold War,” wherein a spark in the most obscure location can set the world alight.

Lyle J. Goldstein is Research Professor in the China Maritime Studies Institute (CMSI) at the United States Naval War College in Newport, RI. In addition to Chinese, he also speaks Russian and he is also an affiliate of the new Russia Maritime Studies Institute (RMSI) at Naval War College. You can reach him at [email protected]. The opinions in his columns are entirely his own and do not reflect the official assessments of the U.S. Navy or any other agency of the U.S. government