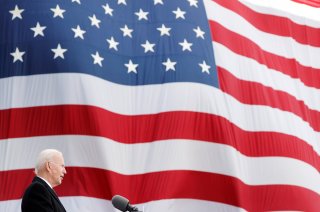 “We’re at an inflection point,” President Joe Biden told the Munich Security Conference the other day, “between those who argue that . . . autocracy is the best way forward” and “those who understand that democracy is essential” to meeting the world’s economic, health, and other challenges.

A month into his presidency, Biden seems deeply committed to restoring America’s moral voice, to resurrecting its traditional postwar role of promoting freedom and democracy around the world.

“We must start,” he told State Department employees, “with diplomacy rooted in America’s most cherished democratic values: defending freedom, championing opportunity, upholding universal rights, respecting the rule of law, and treating every person with dignity.” At a CNN town hall, he spoke passionately about rebuilding the U.S. refugee program that former President Donald Trump severely curtailed, describing “people piled up in camps, kids dying, no way out, refugees fleeing from persecution”—and about an America that “used to do our part” in accepting refugees in far greater number.

Biden recognizes that America promotes freedom and democracy for reasons of not just morality but self-interest—that a freer, more democratic world will be a safer, more prosperous one for us; and that we can best meet the challenge of what he calls “advancing authoritarianism” by highlighting the advantages of U.S.-led freedom over its authoritarian alternatives in Beijing, Moscow, and elsewhere.

Biden’s efforts are timely but, in a complicated world in which the United States has other significant global and regional interests, they will present challenges that he will have to carefully navigate.

In its latest annual report, the nonprofit Freedom House said that 2019 marked the fourteenth straight year that freedom has declined around the world. That is, in every year since 2006, more countries suffered a decline in freedom—political rights and civil liberties—than enjoyed an improvement.

America did not singlehandedly cause this decline, of course, but its global behavior during this period did help drive the trend lines. It was around 2006 when President George W. Bush—after his effort to implant democracy in Iraq turned messy and his push for Palestinian parliamentary elections brought victory to the terrorist group Hamas—that he largely abandoned his freedom agenda.

That was followed by eight years in which President Barack Obama spent less time promoting freedom and democracy than trying to reset relations with Russia’s Vladimir Putin, build warmer ties to Tehran’s mullahs, and cozy up to Turkey’s Recep Erdogan. That, in turn, was followed by four years in which Trump barely seemed to recognize the distinction between free nations and those that were not free. During that time, he largely gave a free pass on human rights to Putin, Erdogan, and Saudi Arabia’s crown prince, Mohammed bin Salman.

Biden, by contrast, is promoting human rights not just generically but with regard to high-profile instances of abuse.

He has condemned “the politically motivated jailing of Alexei Navalny and the Russian efforts to suppress freedom of expression and peaceful assembly,” and his administration is “preparing sanctions and other measures” over Russia’s cyberattacks on U.S. systems and its “near-fatal poisoning” of Navalny.

Meanwhile, the president and his team also have condemned Beijing’s human-rights abuses in Hong Kong and its harsh treatment of China’s Muslim Uighurs, at least a million of whom are interned in detention camps. In addition, Biden has denounced Riyadh’s human rights abuses as well as the crackdown by Burma’s generals.

Already, we see why this all matters. In a clear effort to cozy favor with America’s new president, Riyadh freed the women’s rights activist, Loujain al-Hathloul, who had served about half of her five-and-a-half-year sentence, as well as a host of other activists who were jailed on questionable terrorist-related charges.

Moving forward, Biden’s biggest challenge may be maintaining a consistent voice in the face of competing U.S. interests.

To be credible across the Greater Middle East, for example, Biden can’t criticize Riyadh on human rights without noting the wide-ranging human-rights abuses of Tehran—even if that complicates his efforts to resurrect and then build upon the 2015 global nuclear agreement with Iran.

If he seeks to restart Israel-Palestinian peace-making by leaning on Jerusalem over how it treats the Palestinian people, then he can’t ignore the fact that human-rights abuses by the Palestinian Authority, which runs the West Bank, and Hamas, which rules with an iron hand in Gaza, are at least as serious.

As he seeks both to confront Beijing over its global aggressiveness and to find issues on which to work with the government, he will face the thorny question of whether—in the face of Beijing’s human rights abuses—the United States should send its Olympic team to China for the 2022 Winter Games.

Promoting freedom and democracy is challenging for any president in the face of competing interests, but Biden apparently has concluded that the effort will pay dividends for America and the world.