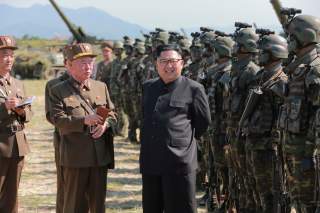 The United States Defense Intelligence Agency has concluded that North Korea does not intend to yield all of its nuclear weapons. Yet the administration is proceeding as if nothing was amiss, which may be the best strategy. Although Washington and Pyongyang’s neighbors might have had trouble living with the nuclear North Korea on display last fall, the world should get along just fine if the North turns out to be a version of Pakistan.

The DIA report, described by the usual unnamed officials to the Washington Post, concluded that despite Supreme Leader Kim Jong-un’s summit appearance, the Democratic People’s Republic of Korea does not intend to turn over its entire nuclear arsenal. In fact, this conclusion was already essentially the consensus of most experts who has ever dealt with the North Korea issue, even before hearing the DIA’s opinion.

Also, the agency believes that Pyongyang has a secret uranium enrichment facility. DPRK officials are thought to be downplaying the number of North Korean nuclear weapons, which some U.S. intelligence officials believe could be as high as sixty-five. Additionally, the DIA warned that Pyongyang is considering how to conceal any undeclared warheads as “denuclearization” proceeds.

All very hard to prove, but frankly, it would be surprising if it was not true. Indeed, it may be the best strategy the Kim government could follow. Pyongyang could turn over a sizable number of warheads, say twenty, and claim they to constitute North Korea’s entire arsenal. They will declare what is obvious and allow inspections, while carefully hiding and disguising the rest.

That number should be enough to win the administration kudus in Washington and the North sanctions relief at the United Nations. But North Korea will secretly keep the rest, say forty-five if the DIA’s numbers are right, and add more over time if s secret fissile production plant exists. North Korea would never admit anything, but also wouldn’t worry if deception is suspected. After all, Pyongyang would enjoy plausible possession of a deterrent without appearing to pose a significant threat to anyone. Furthermore, all of this would happen while they enjoy the economic benefits of joining the rest of the world.

In fact, North Korea’s behavior suggests that this could have been Kim’s strategy. Last fall President Trump could plausibly threaten war against the North. Even the most outlandish claim about the Hermit Kingdom was assumed to be true. The regime started the Korean war and has a long history of turning the peninsula’s peculiar cold war briefly hot multiple times. For instance, North Korea seized an American spy ship, the U.S.S. Pueblo, in international waters and blew up a South Korean airliner. Pyongyang also kidnapped Japanese and South Korean citizens, and as late as 2010 sank a South Korean naval vessel and bombarded a South Korean island, all while routinely threatening its neighbors and America with nuclear annihilation.

Kim Jong-il, the current ruler’s father who favored bouffant hair, platform shoes, and oversize sunglasses, was easily caricatured in the film Team America. Even more so did Kim Jong-un created his own stereotype, by executing his uncle, assassinating his half-brother, terrorizing those who served under him, and threatening to nuke America. Although those who studied the issue did not believe any of the Kims were suicidal, average Americans were more likely to view the leadership as crazy, irrational, and dangerous.

Kim has created a new North Korea. For instance, after the summit, the regime eliminated anti-U.S. propaganda, which was a highlight on both my visits to the North. Equally dramatic is Kim’s new image of reasonableness, a statesman comfortable on the international stage.

As this year dawned, he talked peace and diplomacy. Kim took his place on the international stage with class, demonstrating spontaneity and charm. He met three times with Chinese President Xi Jinping, twice with South Korean President Moon Jae-in, and once with President Trump. He has received an invitation from Russian President Vladimir Putin, and a meeting with Japanese Prime Minister Shinzo Abe also may be in the offing.

Equally important, there have been no additional North Korean threats to turn cities into lakes of fire, no geopolitical trash talk, and no more missile or nuclear tests. The North remains remote and mysterious, but no longer appears dangerous.

Let’s assume this continues. Indeed, imagine if North Korea joins international development organizations, expands diplomatic relationships, increases foreign trade, and welcomes more tourists. At the same time, Pyongyang goes through the motions of denuclearization. Summits are held, agreements are signed, toasts are made. The new, responsible North Korea will be on display.

Besides, even if multiple intelligence services suspected that some number of North Korean nukes remained after formal "denuclearization," there probably would be no smoking mushroom cloud. So what could the U.S. administration do?

No one would want to admit that one of the president’s chief foreign policy initiatives was a failure. Reconstructing the sanctions regime alone might be to attempt the impossible after North Korea has been integrated into global trade. Imagine trying to win popular support in America for war against a country that posed no obvious threat and which many Americans would remember having been described by the president as a friend and partner.

It would be easiest to go with the public fiction and celebrate the fantastic step forward for world peace. Privately, Washington would make explicit any use of nuclear weapons against America would be met with massive retaliation and America would encourage allies to create non-nuclear deterrents. Moreover, the United States would seek further progress on conventional arms control, border issues, and other potential threats of conflict.

This is why it helps to think of North Korea as similar to say Pakistan, but without religion. A slightly unsettling place with nuclear weapons, but not one seen as particularly threatening. Although no one familiar with Islamabad’s internal politics wants that government to possess an arsenal of around 120 to 130 warheads, people who think of Pakistan typically don't fixate on the fact that it is a nuclear state. Only when India and Pakistan risk colliding, do their neighbors worry about what might result. But other countries don’t believe Islamabad would shoot their nuclear weapons at them. Certainly not the United States, which has no reason to be targeted by the Pakistani authorities.

Of course, America should pursue real denuclearization with North Korea. And maybe Kim has had a genuine conversion and really wants to get rid of his troublesome arsenal. But not likely. Even without the DIA report, there aren’t many people who are familiar with the North who believe that to be the case.

Which means America will almost certainly end up with a second-best result—that is, something short of denuclearization. But much good still could be done, and that is an improvement. For instance, ending testing, shrinking the North’s arsenal, and reducing common triggers to war all would make the region and world a safer place.

Eliminating North Korea’s nuclear weapons would be good but preventing another Korean War is essential. The DIA report reminds America that succeeding on the second might mean failing on the first.

Doug Bandow is a senior fellow at the Cato Institute. A former Special Assistant to President Ronald Reagan, he is the author of Tripwire: Korea and U.S. Foreign Policy in a Changed World and coauthor of The Korean Conundrum: America’s Troubled Relations with North and South Korea.

Image: North Korean leader Kim Jong Un guides a target-striking contest of the special operation forces of the Korean People's Army (KPA) to occupy islands in this undated picture provided by KCNA in Pyongyang on August 25, 2017. KCNA via Reuters ATTENTION EDITORS - THIS IMAGE WAS PROVIDED BY A THIRD PARTY. REUTERS IS UNABLE TO INDEPENDENTLY VERIFY THIS IMAGE. SOUTH KOREA OUT. NO THIRD PARTY SALES. NOT FOR USE BY REUTERS THIRD PARTY DISTRIBUTORS.Ê TPX IMAGES OF THE DAY