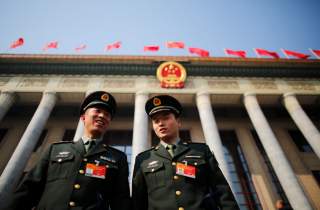 China switched on the largest commercial 5G network to date on October 31, 2019. That’s when China’s three state-owned wireless carriers, China Mobile, China Unicorn, and China Telecom, unveiled 5G subscription packages. The wireless carriers noted that they would be charging customers for speed rather than data use—and peak speed would cost around $45 a month. Beijing has promised that the next-generation network will unleash “a technological revolution.” The announcement is a message to the United States and the world that China’s push toward 5G global dominance will not be slowed by U.S. opposition.

China’s investment in next-generation technologies, including information communications technology (ICT), artificial intelligence, big data analytics, cloud computing, and blockchain among others has become a high priority under President Xi Jinping. A series of government directives, white papers, initiatives, and planning strategies have pushed Chinese tech firms toward the “right” technologies. This ambition to turn China into a global technological and cyber power is openly geopolitical in nature as the 2016 Outline of the National Strategy for Innovation-Driven Development shows: “disruptive technologies are constantly emerging, continually reshaping the world’s competitive landscape, and changing the balance of power among states.”

Beijing’s rapidly-expanding digital and telecoms infrastructure projects—all part of the Digital Silk Road—across the Eurasian landmass will have real-world effects on the people who live within such systems, impacting systems of governance and state power over data. As Chinese tech firms export these complex ecosystems of technologies, norms, and standards in the Smart City and Smart Port programs, the United States and its allies will have to monitor how they impact recipient nations.

For while the normative impact of these technologies is of concern, it is their wider structural potential on the global order that is the most alarming.If one considers the constituent components of the Western order—finance, banking, technological dominance, influence over market and trade rules—it is clear that Beijing is offering alternatives at every level, constructing a vast new order that suits its own preferences. Despite the disparate nature of China’s activities, collectively they form the basis for future hegemony. In this article, we focus on three areas in which the PRC is using technology to advance its aims: values and governance, markets and trade, and shipping.

As aforementioned, Smart Cities, built on the data-rich bedrock of 5G networks, integrate disparate information from different sources to create a centralized data-exchange platform critical to day-to-day operations of administrative, industrial, environmental, energy, and security systems. The premise is that a better-integrated and effectively-operated city boosts economic activity, and promotes sustainable growth into the future, a promising technology for many municipalities in South Asia where population growth is creating fast-growing new cities. However, China will export values and norms as it trains future users of its equipment, using research networks like the National Engineering Laboratory (NEL) for Big Data Application on Social Security Risks Sensing, Prevention and Control. A 2018 Freedom House report noted how China offers training packages to foreign officials on how to handle big data on “public opinion management” and “new media development.” ZTE has helped Venezuela surveil and control its population through a smart ID card system. Linked to China’s satellite system, the cards store location data, financial information, banking transactions, healthcare, and even voting records. The government uses the cards to control access to public benefits. Some states are shaping their cyber laws to mimic those of China with Vietnam, Egypt, Tanzania, and Uganda, producing laws, not unlike the 2016 China Internet Security Law, which requires the collection and verification of users’ identities.

There is a very real danger that as the chief architect and administrator of these digital networks and Smart Cities, Beijing will have access to reams of data in recipient nations, either through intelligence-sharing pacts or through direct server access—another requirement of the 2016 Internet Security Law. Access to this data—and the ability to harvest it using big data analytics—would give Beijing leverage in the form of kompromat, using sensitive information to influence key foreign leaders on issues critical to Chinese interests.

The proliferation of Chinese mobile payment apps—such as Alipay, Baidu Wallet, and WeChat Pay—will increase the amount of financial data going through Chinese hands as all such transactions must pass through a People’s Bank of China clearinghouse, Wanglian. This enables not only Chinese tech companies—but also its state bank—to know foreign financial transactions in real-time. Aside from the expansion of mobile Chinese electronic payments systems, Chinese-built ICT networks and systems across the Digital Silk Road push recipient nations to favor both China’s currency and its companies. In addition to currency swap agreements with many BRI partners, China has made clear its intent to “de-entrench” the world economy from the dominance of the dollar. The Cross-Border Inter-Bank Payments System is thought by some to be a challenge to the U.S.-led Society for Worldwide Interbank Financial Telecommunication.

As Chinese fintech grows, Chinese firms will benefit from valuable consumer information, similar to how Amazon employs real-time search aggregation to gain insights into consumer trends and wants. Chinese companies can use artificial intelligence to assess real-time market needs on a global scale. Privileged companies can bring desired products to the market ahead of domestic or U.S. companies. Moreover, Chinese companies understand the exact capacities and needs of the host countries, giving them a distinct competitive advantage over both Western and local firms in product design and production. This advantage is likely to be particularly acute in areas that China believes to be strategically important, such as in autonomous vehicles, artificial intelligence, and the Internet of Things.

One of the oldest pillars of hegemonic power has been controlling the sea lanes and the trade that takes place upon them. Eighty percent of global trade is transported by sea and nearly two-thirds of sea trade passes through Chinese-owned ports. As of 2019, Chinese State-owned enterprises like COSCO and China Merchants own forty-two major ports in thirty-four countries across the Eurasian and African coastlines. Here, China’s Digital Silk Road and its Maritime Silk Road come together in the form of Smart Ports. Centralizing data and increasing automation will create efficiencies and automation in loading, thus increasing capacity.

In one network, the Big Data Risk Monitoring Platform at Nanning’s Customs Office tracks cross-border trade with twenty-six ports across Southeast Asia. This platform allows China to track the real-time status of goods, destinations, and relationships around the world. While shipping manifests do track the movement of goods, never before have ports had the capability to comprehensively map real-time global supply chains. This information allows for an unofficial sanction system that targets the goods of nations (or even individuals) that the PRC wishes to influence. Indeed, China has already done this in a low-tech way when it restricted Philippine banana exports from entering Asian markets between 2016 and 2018 over bilateral tensions related to the South China Sea.

The world is rapidly changing and there are signs that China’s ambitions with the Belt and Road Initiative—and all its digital components—are part of the sticky power of a new hegemony. Chinese leaders recognize that new disruptive technologies are harbingers of change for people-to-people contacts and can also change how states trade, police, and run their municipalities. Beijing’s promotion of its tech firms across the Eurasian landmass allows for the future exploitation of international data for political effect—allowing Chinese leaders to set rules, create norms and standards, and to control trade and political activity. We are entering an age of competition and it is not only between nations but between ideologies and the states that host them.

Dr. John Hemmings is an associate professor at the Security Studies College of the Daniel K. Inouye Asia Pacific Center for Security Studies, a US Department of Defense regional center as well as a senior associate fellow at the Henry Jackson Society, a London-based think tank. He writes in his own personal capacity.

Patrick Cha is an intern at the Daniel K. Inouye Asia Pacific Center for Security Studies. He is a 2019 graduate of the Woodrow Wilson School of Public and International Affairs at Princeton University.