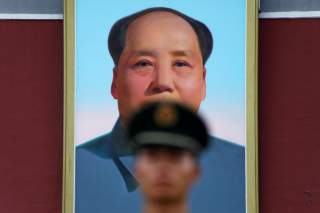 In conventional accounts of the Chinese Revolutionary Civil War (1926–1949), Mao Zedong is shown towering heroically above a great throng of adoring peasants, who have surged up in a great wave to defeat their imperialist foes and propel the Communists into power. Commonplace during Mao’s reign, this depiction remains a major keystone in Chinese Communist Party (CCP) propaganda and claims to legitimacy today. Yet, its truthfulness has come into question in recent years and this directly threatens the survival of the Party.

A growing number of historians—both in China and abroad—have begun to unpick the myth. Among the most prominent are Jung Chang and John Halliday, who wrote a scathing retelling of Mao’s life and actions, with the thesis that Mao and his followers were bloodthirsty thugs who bullied their way into power through anti-civilian violence, sinister manipulation and dumb luck. Chang and Halliday’s revisionism has been demonized by the CCP (and condemned by some Western Sinologists), but their core claims about the cruelty and fundamental unpopularity of the CCP during this early period have been correlated by numerous other researchers.

One particularly revealing investigation was conducted by the Chinese historian, Sun Shuyun, who retraced the footsteps of Mao and the Communists during their infamous “Long March” retreat from the Jiangxi Mountains to Yan’an in 1934–5. Throughout her journey, she interviewed veterans of the March and local residents who had been alive at the time, and found that they presented radically more negative versions of events than those propagated by the CCP. The research of Jean-Louis Margolin, Frank Dikötter and Rudolph Rummel into the extensive atrocities and inhumane treatment of civilians committed by the Communists during their rise to power also deserves special mention. Nor should the work of Otto Braun, who documented many of the abuses of Mao and his followers firsthand during the 1930s, only to have his reports be put aside by his superiors back in Russia for reasons of political expediency, be overlooked.

The findings from these and other investigations are bringing the real truth about the Chinese Revolutionary Civil War to light. Contrary to CCP propaganda, Mao and the Communists were mostly unknown for much of their early existence, and those people who had heard of them tended to view them with either ambivalence or outright hostility. This latter emotion came about in no small part because, under Mao’s leadership at the time, the CCP deliberately killed millions of people during two major purges in the 1930s and 1940s, as well as through ongoing mass killings and maltreatment of civilians. Unsurprisingly, this dramatically suppressed the recruitment and retention of supporters to the Communist cause.

Even at the alleged highpoint of its popularity in 1945, when Zhu De made the probably exaggerated claim that the CCP possessed some 1.2 million members, it is notable that the Nationalist Party could point to a membership of three million people (a number that had more than doubled over the preceding decade). The Communist refusal to disarm and accept Nationalist rule that same year, despite the Chinese people having just endured eight exhausting years of war against Japan, cost them dearly in terms of popularity when fighting broke out again in 1946.

Ultimately, it is telling that the Communists defeated the Nationalists by the deployment of large conventional armies, rather than through the eruption of popular uprisings across the country. Moreover, their armies were equipped predominantly by the Soviet Union and populated mostly by peasant draftees instead of eager volunteers. Indeed, there was a not a single spontaneous pro-Communist popular rebellion behind enemy lines during the entire thirty year civil war, even after it became obvious in the late 1940s that the CCP was on the brink of total victory. The province of Jiangxi—home to Mao and his followers during the 1930s and location of the first full Chinese Soviet—was one of the last bastions to capitulate to the CCP in 1949. The local inhabitants remembered the horrors of Mao’s rule with such fear and detestation that they were willing to fight on long after it became clear that defeat was inevitable.

In the former Soviet Union, the myths surrounding Stalin were formally denounced by President Khrushchev and his reign of terror exposed just three years after his death in 1953. Given the fundamental changes that China has undergone since the death of Mao in 1976, it might seem logical that the Chinese government would have similarly detoxified itself of the myths surrounding Mao’s days as an insurgent. Deng Xiaoping had such a chance in the late 1970s, but while he did critique Mao’s actions after the People’s Republic of China was formally founded in 1949, he declined to similarly criticize Mao’s earlier days. Today, the CCP clings doggedly onto the myth of Mao’s popularity during the Chinese Revolutionary Civil War, even when exposed to contradictory evidence.

It does so because the depiction of Mao and the Communists as being propelled into power by a popular rebellion provides them with the illusion of a popular mandate, to which they would otherwise have no claim. The CCP never needs to hold democratic elections, so the logic goes, because the Communists were originally chosen by the people to lead and that sacred trust remains today. This was the same core reason why Khrushchev denounced Stalin but neglected to condemn his predecessor, Lenin, despite the latter also enjoying only limited popularity and overseeing countless atrocities against the Russian people.

The mandate of a popular beginning matters more currently to the Communists than at any time since the end of Mao’s rule because their other major claim to legitimacy is weakening. Since the early 1980s, the CCP has leaned heavily for support on the rapid accumulation of wealth, accompanying improved living standards, and associated reputation for competent rule that its ever-more market economy has delivered. “Let us rule uncontested,” the Faustian bargain they have offered has seemed to say, “and we will give you a thriving economy and a good quality of life.” While this arrangement has survived for decades, the Communist ability to deliver on their end of the deal is now coming into doubt. Year-on-year economic growth is shrinking, structural deficiencies are being exposed and international events such as Trump’s recent trade tariffs are adding their own squeeze. Moreover, the rich-poor divide is increasing, working conditions are deteriorating in many factories, and slums and other substandard living accommodations have become the norm in many major cities.

This precarious economic reality is likely to make the CCP double down upon the myth of its population installation in the years ahead. Already, we have seen President Xi Jinping attempting to style himself in the same kind of “popular strongman” persona that Mao worked so vociferously to have applied to himself. This is no mere quest for petty personal aggrandizement, but instead represents a determined drive by the CCP to solidify this portion of their claim to legitimacy. The Party is only too aware that if it loses both its economic and its historical claims to legitimacy, then it risks devolving into an unstable authoritarian state that is held together only by repression, fear and exhortations of the populace towards nationalist xenophobia. The poor track record of such states makes such a path anathema to the CCP.

The CCP rightly fears, therefore, that a widespread broadcasting of the real facts about its murderous and unpopular origins could scupper its claim to being a popularly installed government. To forestall this eventuality, it is likely to promote pro-Mao myths and censor those who try to question its line on this matter in an ever more ferocious fashion in the future. The CCP’s habit of banning books that contain histories about its early years that it dislikes—which they did to both of Jung Chang’s bestselling books that address this topic—will therefore escalate accordingly. At the same time, historians are unlikely to give up their quest to obtain a fuller and less biased understanding of the period, especially now that the pioneering recent studies by Jung, Sun and others have helped the proverbial genie to begin emerging from the bottle.

Rather than being fought in economic, political, or even military domains, the deciding battle for the fate of the CCP may, therefore, be waged over its history. If the Communists can continue to successfully make the case that they were chosen and installed by the people, they may be able to endure the impending economic storm. But if the CCP fails in this task, and the true nature of its unpopular and often brutal rise to power is fully exposed, its last remaining claim to legitimacy will be stripped away, with potentially explosive consequences.

Francis Grice is an Assistant Professor of Political Science and International Studies at McDaniel College in Maryland. He has a Ph.D. in Defence Studies from King’s College London (2014) and specializes in Asian Security Studies and International Relations. His most recent book, The Myth of Mao Zedong and Modern Insurgency, was published in 2018.