History Will Be Kinder to Boris Johnson 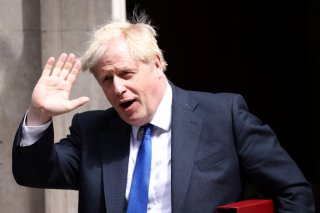 Britain's politics is in a chaotic state. The prime minister, Boris Johnson, has undergone months of negative headlines since the beginning of the year, including a protracted investigation into parties held in Downing Street during the worst of the pandemic. This week, a sexual abuse scandal involving a government whip has precipitated something far greater.

The prime minister has now announced his intention to resign. He faced massed ministerial resignations, dissension in his cabinet, and the increasing sense that time has simply run out. The media consensus is that this is an ignominious conclusion.

All this may be true. Johnson's insistence that he will stay in office—the statement alone was something considered impossible to make by many commentators—eventually stalled.

But even as he prepares to leave office, it is worth reexamining Johnson's difficult time in power, and what he did with his time in office. It has been just shy of three difficult years, filled with national and international crises: including pandemic, war, economic stress, and difficulty.

When the histories are written of this period, they may be kinder to Johnson than many today expect. Of the essential events of his premiership, it seems increasingly clear that, of the major issues, Johnson was largely on the right side.

This view is not universally shared. Part of that is a question of personalities and style.

Johnson as prime minister attempted to play both innovator and disruptor. He hired unconventional people to staff 10 Downing Steet, and as many of them later left under a cloud of acrimony, it was assumed that these people had been brought in erroneously.

In the case of Dominic Cummings, for instance—now a declared rival—Johnson succeeded in his limited objectives: Johnson won the election of 2019, and was finally able to pass a version of a Brexit deal which allowed the United Kingdom to leave the European Union.

Those two things alone had eluded the previous Conservative leader, Theresa May, and winning an election convincingly had escaped every Tory leader of the past thirty years except David Cameron and John Major.

Leaders are not judged just on the elections they win. It matters also what they do with power. Johnson's time has coincided with great international difficulty. In the past three years, the world has felt unstable in ways which are akin to the September 11 attacks in 2001, and the financial meltdown of 2008.

Britain has not been immune from these global shocks. The country has faced unprecedented challenges, with the Covid-19 pandemic, global demand and supply shocks, and the Ukraine war among them.

Johnson's handling of Covid-19 was widely unpopular among parts of his own party (who despaired of any regulations to hold the virus back) and among those who wished for more extensive restrictions covering a greater portion of the pandemic's first two years.

Although statistics are still difficult to verify, all-cause mortality data emerging now for the first time indicates that Britain performed rather better than feared, and that Johnson's government had saved rather more lives than his critics had alleged.

On Ukraine, Britain was arming and training Ukrainian forces before the threat of war was fully understood by other countries.

Britain is not the largest donor to Ukraine, either financially or in terms of equipment—but those British systems which have found their way to Ukraine are popular favorites, the NLAW anti-tank weapons especially, but also Mastiff, Wolfhound, and Husky armored vehicles.

Indeed, the extent of international approval of Johnson's policies is often met with incredulity in Britain. Johnson is the most popular foreigner in Ukraine, as numerous reporters who are personally opposed to the prime minister have found.

In times of crisis, conventional thinking is often insufficient—not least when conventional thinking on starving Ukraine of aid, or joining vaccine procurement plans run by the European Union, goes some way to exacerbate the problems we wish to solve. Unprecedented times require leaders who buck trends.

As the end of his premiership approaches, it is worth reassessing Johnson's time in power and his true role in government, good and bad. Offering objective analysis on the global challenges we are facing and have faced, and how the prime minister dealt with them, is as useful as it is necessary.