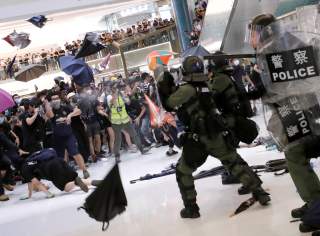 The great game of international chicken that did not occur in the 1980s was the United Kingdom holding a referendum on Hong Kong’s future rather than negotiating with China. Territorial legislators generally opposed the handover to Beijing while London consciously refused to consult the residents.

Had Hong Kongers voted for independence or continued UK control, then Deng Xiaoping’s government, early in the reform process and only shortly beyond a costly conflict with Vietnam, would have hesitated to use military force to retake the territories. However, it is hard to imagine a later Chinese government not revisiting the issue and refusing to accept no for an answer.

Hong Kong, essentially stolen by the world’s then dominant imperial power from the enfeebled Qing Dynasty, was reclaimed by the People’s Republic of China to great fanfare in 1997. Even many ethnic Chinese around the world were proud to see what they conceived of as historic China rather than the ephemeral PRC overcome yet another humiliation inflicted by the West.

Beijing promised to preserve the unique character of what became a Special Administrative Region for a half century. Hong Kong would be an anomaly, an outpost of liberty and tolerance in what remained a dictatorship capable of great violence, as in Tiananmen Square in 1989. And for years the PRC largely kept its bargain. A journalist friend said that in the early years Chinese authorities may have intervened less in his field than had British colonial administrators.

However, that world changed in 2014. And while Beijing is the source of growing restrictions, it is Hong Kong’s own activists—call them simultaneously impassioned and irresponsible—who accelerated a process that otherwise might have taken much longer. Misjudging their own leverage, democracy protestors set in motion forces that could result in political cataclysm. Wat is needed is mutual forbearance, which appears to be absent on both sides.

Hong Kong always was an anomalous creature, combining territory seized by London with additional land leased for ninety-nine years. As a colony Hong Kong enjoyed liberal rather than democratic governance. That made it difficult for London to advocate a democratic transformation as it prepared to relinquish control. Moreover, Deng’s government would never have agreed to forgo its claim and the failure to agree would have created a dispute almost certain to explode violently at some future point.

However, the autonomous Special Administrative Region muddled along successfully for years. There were moments of challenge: in 2003 mass demonstrations forced the SAR government to back down and shelve national security legislation which would have threatened civil liberties. However, Beijing generally exercised its influence discreetly and lightly.

Until five years ago, anyway. Then the city’s government, always responsive to the PRC, planned to adjust election law with a small nod, but not much more, toward democracy. In the Basic Law drafted as part of the turnover agreement negotiated with the UK, Beijing promised that “the ultimate aim is the selection of the Chief Executive by universal suffrage upon nomination by a broadly representative nominating committee in accordance with democratic procedures.” So the city executive proposed allowing a citywide vote, while restricting nominations to candidates approved by a body dominated by PRC allies.

That violated the spirit, though perhaps not the letter, of the Basic Law. But that was to be expected. No sane person could imagine the PRC establishing a full democracy in territory under its control. Beijing might be persuaded to open up the nominating process a bit but could never be convinced to sacrifice ultimate control.

However, the Umbrella Revolution broke out. It consisted of nearly three months of youth-dominated protests that even closed public areas and roads for seventy-seven days. Had demonstrators been prepared to temper their demands, they might have won some concessions, but instead the activists insisted on full democracy; the government eventually broke up the protests and pushed forward with its plan. In the city legislature democracy advocates managed to block approval of any changes, leaving an even less democratic system. The protestors’ tactics divided residents, angering some sympathetic with their objectives.

Further erosions in Hong Kong’s autonomy followed. For instance, in 2015 several publishers critical of the PRC were arrested/kidnapped by Chinese authorities, apparently violating SAR and international law. However, nothing was done in response.

That the people of Hong Kong are ultimately ruled by Beijing may not be fair, but it is reality. And no outside power is going to come to their aid. American legislators might issue supportive statements, but Washington cannot—and won’t try to—force the PRC to grant Hong Kong rights not possessed by anyone else ruled by Beijing. To best protect residents’ freedoms, activists should pursue the strategy most likely to keep China disinterested in the territory’s internal affairs. Alas, filled with more passion than prudence, democracy campaigners did precisely the opposite.

In 2016 several independence-minded legislative victors modified or augmented their oaths of office, primarily to highlight their contempt for the PRC. That set in motion an unsurprising if unexpected cascade of events. Their pledges were ruled invalid. After properly retaking their oaths Beijing applied pressure to block the members from taking their seats in the Legislative Council. Worse, the Xi government used the National People’s Congress to tighten the oath-taking requirement, forbidding a second attempt, and disqualify candidates who backed independence, which Beijing defined broadly. The city authorities then challenged the election of additional democracy activists and barred the candidacies of others. Unfortunately, popular sentiments were divided, since many residents objected to what looked to be juvenile publicity-seeking.

Since then several Umbrella Revolution leaders were convicted and imprisoned. The legislature is considering legislation pushed by Beijing to criminalize showing disrespect to China’s national anthem (especially common at sporting events). And, most controversially, Chief Executive Carrie Lam advanced extradition legislation that was triggered by an incident involving Taiwan but would most obviously make it easier for the PRC to seize dissidents and critics. (Official safeguards obviously would not bind the Beijing authorities,) Her intentions might have been innocent but vast numbers of Hong Kongers did not trust her. A series of massive demonstrations reaching an estimated two million people, more than a quarter of the territory’s population, followed.

The latter caused Lam to suspend the legislation. Protest leaders demanded that she withdraw the bill and resign. She refused and her advisers said that there would be no more concessions, a position undoubtedly cleared with Beijing. Demonstrations continued, including a violent takeover of the legislative chamber and later clashes—termed “riots” by Lam. These episodes are likely to spark a tough, if delayed, reaction, since the local government, with Beijing on its mind, has responded most sharply to protests. In fact, the police commissioner called a press conference to denounce the demonstrators’ “irresponsible behavior” and justify his force’s response.

Residents’ frustrations are understandable, since their liberties are at great risk. Hong Kong’s unique status looks likely to disappear much sooner than the 2047 promised by the Deng government. However, the more radical people’s demands and violent their actions, the greater the acceleration of Beijing’s control. And the greater the cost the PRC will be willing to accept to enforce its will.

In 1997 Hong Kong mattered greatly economically to China. The colony then was a critical access point for Western trade and investment to the PRC. The mainland was undeveloped; most cities were little sophisticated. Shanghai’s business community barely existed and Pudong’s commercial district was in its infancy. The territory offered assurance and protection for Western firms hesitant to trust an impoverished communist state, not long removed from mindless revolutionary violence and barely into what promised to be a lengthy reform process. Beijing could not afford to kill the golden goose.

Today the PRC attracts trade and investment directly. Hong Kong’s share of China’s GDP has dropped dramatically. The SAR still matters, but an economic crisis there would not likely spark investment flight elsewhere in the PRC. For the Xi government politics increasingly is taking precedence over economics in Hong Kong.

To the extent one can discern Chinese public attitudes toward the territory, it is that residents are spoiled, acting as if they are entitled to far more than what the vast majority of Chinese receive. One well-connected Chinese official with whom I spoke when visiting China earlier this month argued that the protests were inexplicable, since Hong Kongers had been afforded so many privileges.

No doubt Beijing’s leadership feels the same, but even more so: unruly citizens staging sometimes violent demonstrations on behalf of principles barred in the mainland are a great embarrassment and even a threat. The PRC naturally blames others for unrest in Hong Kong: Foreign Minister Wang Yi said it was “highly alarming that Western forces have been stirring up trouble and provoking confrontation in an attempt to undermine Hong Kong’s peace and stability.” However, the Great Firewall has enough leaks that the truth will get through to many on the mainland.

So far, Beijing has been willing to stand down when necessary. The Umbrella Revolution was allowed to run its course, but with no concessions granted. Once public passions eased, the Xi government is thought to have spurred the SAR’s increasingly tough response to democracy protestors, jailing them and barring their legislative candidacies. There were few political obstacles: Residents were divided and there were no mass protests.