How Afghanistan Impacts the Ukraine Crisis 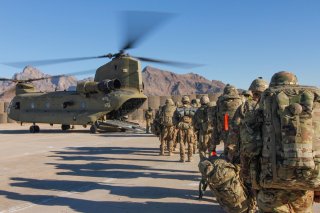 Despite international efforts to de-escalate tensions, there are ominous indications of a Russian military invasion of Ukraine in the coming weeks. With over 100,000 troops already massed along the Ukrainian border and joint military maneuvers with Belarus scheduled in February, Russian president Vladimir Putin issued a list of demands and security guarantees from the United States and NATO, including a promise not to expand the alliance to new members such as Ukraine. His proposals would violate NATO’s “open door policy” and fundamentally change the post-Cold War security order in Europe.

Unsurprisingly, President Joe Biden and NATO rejected these demands. President George W. Bush first raised the notion of further NATO expansion in 2008 by supporting NATO Membership Action Plans for Georgia and Ukraine over Russian objections. The resultant geopolitical tensions—including the 2008 war with Georgia and 2014 annexation of Crimea—make it highly unlikely either country will join the alliance for the foreseeable future. Consequently, the real disagreement with Russia centers on the principle of self-determination.

In 1994, Ukraine agreed to remove all Soviet-era nuclear weapons from its territory in exchange for “security assurances” from the United States, the United Kingdom, and Russia under the terms of the “Budapest Memorandum.”In keeping with the promises outlined in the document , Secretary of State Antony Blinken reiterated that “there are core principles that we are committed to uphold and defend – including Ukraine’s sovereignty and territorial integrity and the right of states to choose their own security arrangements and alliances.”

Ukraine does not pose a significant military threat to Russia. However, a free, autonomous country on its border that is friendly to the West is problematic for Putin, who believes the collapse of the Soviet Union was “the greatest geopolitical catastrophe of the century” and doesn’t consider Ukraine a real country. These same concerns explain Russia’s deployment of military forces to extinguish the recent protests in Kazakhstan. Putin complained about attempts to “interfere in the domestic affairs of our states” and said the armed intervention “showed that we will not allow anyone to stir up the situation…and will not allow so-called color revolutions to be executed.”

While diplomacy continues, the prospect of conflict seems more likely than not. Further complicating matters, Biden carries the stigma of “strategic failure” from the botched withdrawal that ended the two decade-long war in Afghanistan. The Afghanistan debacle signaled weakness to U.S. partners, competitors, and adversaries alike. Consequently, the desire to avoid another international catastrophe is influencing the Biden administration’s response to the Ukraine crisis.

This is a remarkable turn of events for someone who campaigned on his extensive foreign policy experience. Upon assuming office, Biden declared that “America is back” and pledged to “repair our alliances” to meet the challenge of strategic competition from China and Russia. Unfortunately, his ambitions (and credibility) took a big hit in the aftermath of the Afghanistan withdrawal that began a precipitous decline in public approval which remains underwater today.

These political headwinds led members of his own political party to voice concerns that the lack of “easy options” to avert a Russian invasion of Ukraine could make Biden appear weak. At the same time, critics such as Representative Mike Turner (R-Ohio) argued that the Afghanistan withdrawal “shows that this administration has a broken foreign policy and has raised questions about its commitment to its allies.” Nevertheless, there is bipartisan support for Ukraine on Capitol Hill as demonstrated by a delegation of U.S. senators that recently traveled to Kiev in a “show of solidarity” against Russian aggression.

While solidarity is an admirable sentiment, Biden said he has “no intentions” of moving U.S. military troops into Ukraine to defend the country against an invasion. The geopolitical reality is that Ukraine is not a NATO member subject to the protection of the Article 5 protection. Hence, Biden’s desire to project strength (and regain his foreign policy chops) by deterring Putin from military invasion and his refusal to use military force to do so present a high-stakes conundrum for the president.

So, what is the strategy? To resolve the crisis, Blinken offered Russia two paths: “diplomacy and de-escalation” or “deterrence and massive consequences.” Regarding the latter, the administration is threatening “enormous consequences worldwide” to increase the costs for Russia if it takes additional military action against Ukraine. In addition to  imposing sanctions against Putin personally, other options include removing Russia from the Society for Worldwide Interbank Financial Telecommunication (SWIFT) network. Expelling Russia from SWIFT would make it difficult for financial institutions to send money in or out of the county, including oil and gas transactions. The Biden administration is also considering imposing export controls targeted at Russia’s technical industries by denying them access to high-tech components (e.g., silicone chips) that cannot be replaced domestically or through alternate suppliers. While Putin has attempted to “sanction-proof” the Russian economy since 2014 and amassed some $630 billion in financial reserves, he will nevertheless pay a heavy price for invading Ukraine—at least in the short-term.

Given the painful lessons from the U.S. withdrawal from Afghanistan, Biden is setting expectations by treating the Ukraine situation as a full-scale crisis. The administration is taking (and leading) a more proactive approach with stark warnings that a Russian military invasion of Ukraine would be the largest since World War II and “would change the world.” Moreover, Chairman of the Joint Chiefs of Staff General Mark Milley said such an attack would be “horrific” with a “significant amount of casualties.”

Consistent with the gravity of the situation, Blinken authorized the reduction of non-essential embassy staff and ordered the departure of all family members in Kiev, while also elevating its Travel Advisory for Ukraine to Level Four (“Do Not Travel”). These directives were implemented despite Ukrainian authorities’ efforts to project calm. In addition to avoiding public panic, the Ukrainian economy is struggling under the threat of a military conflict. In response, President Volodymyr Zelenskyy told his nation that “We are strong enough to keep everything under control and derail any attempts at destabilization…” and the withdrawal of diplomats and their dependents “doesn’t necessarily signal inevitable escalation.”

While Biden may be sympathetic to Zelenskyy’s position, he decided the more prudent course of action was to take these proactive steps and avoid repeating the chaotic Afghanistan evacuation. One can imagine the condemnation the president would suffer for failing—once again—to plan for a safe and orderly evacuation during an international crisis.

The Biden administration also received criticism for its “unilateral” decision to leave Afghanistan despite objections from some NATO member states. This time, Washington is making every effort to consult its allies and partners to present a united front in order to deter Russia and reassure Ukraine. In describing this more inclusive and transparent approach, Deputy Secretary of State Wendy Sherman said that “The United States and our NATO Allies and European partners are fully committed to the principle of nothing about you without you – that is to say, nothing about NATO without NATO, nothing about Europe without Europe, and nothing about Ukraine without Ukraine.”

These consultations include the newly elected German chancellor, Olaf Scholz, who has been somewhat receptive to Putin’s concerns. In addition to prohibiting the use of its airspace to deliver military aid, Germany refused to allow Estonia to send German-produced howitzers to Ukraine. Scholz’s position is influenced by Germany’s dependence on Russian energy (exacerbated by the decision to shut down three of its last six nuclear plants) and the nearly completed Nord Stream 2 pipeline. Sensitive to these energy security concerns—and the strategic importance of reducing Putin’s leverage—the Biden administration is working with energy producers like Qatar to provide alternative sources of supply for Europe.

Meanwhile, a separate dialogue between France, Germany, Russia, and Ukraine was conducted under the so-called “Normandy format” that excluded the United States. French president Emmanuel Macron, who is facing reelection this year, has warned that NATO is becoming “brain dead” and advocated for a more independent European security policy

Perhaps sensing frustration and dissention, Biden called leaders of the European Commission, European Council, NATO, France, Germany, Italy, Poland, and the United Kingdom to “discuss diplomacy, deterrence and defense efforts” as well as potential sanctions against Russia. He later said the meeting resulted in “total unanimity with all the European leaders.”

Unfortunately, Biden appeared to undercut his own message during a recent press conference where he said that the consequences for Moscow would “depend on what [Russia] does. It’s one thing if it’s a minor incursion and then we end up having a fight about what to do and not do, et cetera.” Although the White House subsequently issued a clarification, the damage was already done as evidenced by Zelensky’s statement that said, “there are no minor incursions and small nations. Just as there are no minor casualties and little grief from the loss of loved ones. I say this as the President of a great power.”

Despite these shortcomings, Putin is likely surprised by NATO’s unity, especially after the Afghanistan fiasco. The alliance is increasing its readiness by sending reinforcements to eastern Europe and the U.S. Department of Defensealerted 8,500 troops to prepare to deploy as part of the NATO Response Force. These actions are occurring as an additional $200 million in U.S. lethal military aid (including Javelin missiles) arrives in Ukraine.