Letting Go of Afghanistan: Presidents Biden and Trump Were Right 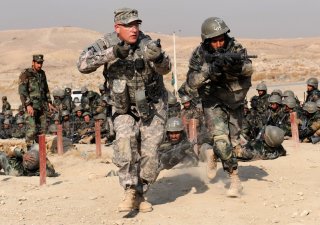 THE U.S.-LED aerial evacuation of Western officials, citizens, and local partners from Kabul formed the denouement of a poorly conceived, incompetently managed, and historically futile project to turn Afghanistan into a self-sufficient, liberal, and unified country. Despite the fundamental flaws in U.S. policy over the last twenty years, newspapers, journals, talk shows, websites, and now U.S. congressional hearings have brimmed with efforts to point the finger of failure in Afghanistan at one man and his closest advisors: President Joe Biden.

This is disingenuous blame casting. The passion of much of the commentary would be a bit more tolerable had the authors, pundits, and congresspersons spent more time over the last ten years offering cold-eyed assessments of the ongoing difficulty of the Afghan project, honestly sharing those assessments with the American people, and then trying to convince them that the United States should nevertheless stay the course. The American people have wanted out of this war for a long time: Donald J. Trump ran, among other things, for office on a prompt withdrawal, and in his uniquely passionate but somehow desultory fashion moved that project forward. Biden ran on withdrawal and made good on his promise, but for practical reasons slowed the process that his predecessor had put in place.

Commentary on the Afghanistan disengagement, and the pattern of the questions in the recent Senate and House Armed Services Committee hearings, can be divided into two arguments. Some continue to assert, as they did before the disengagement, that the United States should have decided to stay in Afghanistan forever, and that the denouement somehow proves it. Others agree with presidents Trump and Biden but “Monday-morning-quarterback” the process, certain that they would have had a cleverer and cleaner way of getting out. Both positions should be challenged.

THE MAIN argument for leaving Afghanistan was and remains strategic. The security gains were neither commensurate with present, nor likely future, military and human costs.

Good U.S strategy has many elements. Fundamental is the notion of scarcity. Security resources of money, military people, and leadership attention are not infinite. They should be allocated across threats and opportunities in terms of their importance to our national security. Though the problem of terrorists with global ambitions remains, Al Qaeda as a group is not nearly as coherent as it once was. Al Qaeda and ISIS, its equally nihilistic cousin, in its many guises, are under constant observation and pressure. More importantly, since the 2001 attack on New York City and Washington, DC, expensive layers of defense have been put between aspiring terrorists and Western citizens. The U.S. intelligence budget has grown to $80 billion per year. Intelligence agents and special operations forces are globally on the prowl, looking for those plotting outrages. This effort is now institutionalized. Al Qaeda and ISIS are both less capable than they were at the height of their powers; Western defenses are much stronger than they were. To the extent that the Afghanistan effort suppressed both, the contribution pales in comparison to the rest of our efforts on this front.

But partisans of staying on in Afghanistan wish to do a great deal more than fight Al Qaeda. They wish to show that the United States, and indeed, the West, can turn a fissiparous, multiethnic, economically underdeveloped, traditional, Islamic society into a modern liberal state. Somehow this became a project in its own right, divorced from the mission against Al Qaeda. We became committed to showing that our way is the right way—that both traditional and modern societies can and should model themselves on us, and that we can guide them there.

That project failed, despite the existence of many willing Afghan participants. The United States and its Western allies could not create a functioning state apparatus; a competent, somewhat self-reliant military; or a truly inclusive polity, as government reports and sporadic journalistic coverage had shown for years. Instead, we created mere shadows of these things, and then came to mistake the shadows for substance.

But what about the thousands of Afghans who embraced Western ideas, such as opportunity for women, a free and open press, a liberal education, or simply those who for patriotic reasons chose to work actively with the West? They are familiar to us because they know how to talk to us. But the Taliban did not conquer Afghanistan in a series of pitched battles against committed troops guided by sagacious political leaders in a popular fight to defend liberal democracy. It conquered Afghanistan because, in fact, few Afghans believed in the government that the West created, or in the project that we undertook. Local political leaders across the country switched sides with relative ease. Afghan government officials disappeared.

THE AFGHAN counterterror project is less important to the overall counterterror strategy than it once was, and the Afghan modernization project, whatever its strategic reasons were, had clearly failed long before Biden’s election. Staying on was pointless.

Partisans of staying on in Afghanistan insisted that the costs were low. They believed that even if the objectives were elusive, we should have stayed on anyway. But the costs were not low, and the risks of much higher costs in the future were high. For most of the Trump administration, 10,000 U.S. troops or more were on the ground every year, while thousands more all over the world supported them. Pentagon leaders’ assertions that the 2,500 personnel still in Afghanistan when Trump left office would have been sufficient to prop up the Afghan military contradict their own acknowledgement of years of Taliban successes, and their own clear expectations that the Taliban would go after these U.S. troops had they remained.

Military personnel are among our costliest and scarcest military assets. The U.S. military is now said to face many readiness challenges. These will need to be overcome if the new rhetoric of great power competition is to be matched with real policies and hard power. No uniformed person ought to be devoted to projects with little payoff. Similarly, $40 billion dollars per year, the Pentagon’s last estimate of the annual cost of the war in Afghanistan, is “cheap” only within the confines of the Washington, DC echo chamber. $40 billion dollars a year over the next thirty years could support growing the Navy from 300 to 500 ships—a goal cherished by those focused on the China threat.

These numbers do not capture the risks associated with remaining in Afghanistan. Even before President Trump began negotiations with the Taliban, they were steadily increasing their hold on the rural parts of the country. The Afghan security force proved unable to sustain its nominal personnel strength. Roughly a quarter of its soldiers deserted every year. The Taliban’s equipment improved significantly during these years, partly due to Afghan government losses (or worse, backdoor sales) of U.S.-supplied equipment. The Taliban proved capable of invading the centers of major cities, which they only relinquished under pressure from scarce elite Afghan special forces supported by massive applications of U.S. intelligence and air support, and occasionally even infantry combat by U.S. special operators. The Taliban would then retreat but had made their point. They could move in whenever they wanted. This surely supported their coercive diplomacy toward local leaders and low-level government officials—cooperate with us or we will be back. Finally, Taliban raids and assassinations against key officials in Kabul demonstrated that their intelligence was far better than that of the government, sending the message that citizens had better beware. Thus, as the Pentagon has acknowledged, there was a very high probability that had U.S. troops remained in Afghanistan, the Taliban would have abandoned their commitment to Trump not to attack them, and instead would have intensified their campaign to push the United States out of the country. A stable, steady state commitment of only small U.S. forces was not in the cards. As Vietnam analogies are now in fashion, something like the Tet Offensive was more likely.

The Afghanistan project lost its strategic rationale long ago, but those most intensely concerned about the welfare of those Afghans who signed up should consider some ethical dilemmas of continued U.S. presence. Compared to a Taliban victory now, and the score-settling that has ensued, they would have us believe that staying on would have been the ethical thing to do. This is not so. Prolonging the Afghan mission would have entailed more Afghans accepting jobs working for the West and becoming hostages to the fortunes of war. Likewise, more Afghans would have believed that they live in a burgeoning liberal society. More women would have sought education and work outside the home. This seems like progress to those who supported the intervention, but it has a dark side: it is courting disaster to create more Westernized Afghans if we cannot figure out a way to build a competent Afghan government and security service that can defend them. And, as we have discovered, the more committed we seem to the security of Afghanistan, the more comfortable Afghan political leaders, bureaucrats, and soldiers feel about securing their personal interests at the expense of their citizens. The war would have gone on, and without accretions of U.S. troops and money, the situation would likely have further deteriorated.