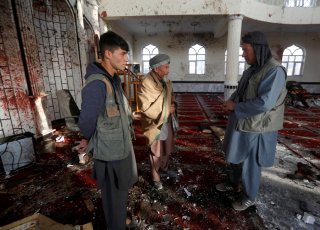 At least thirty Afghans were killed, and dozens more wounded, in a sophisticated suicide bomb attack on the Bibi Fatima mosque in Kandahar, the most prominent Shia mosque in southern Afghanistan.

The Islamic State (ISIS) terror group claimed responsibility via its Amaq news agency on Friday afternoon. The statement outlined the method of the attack, claiming that two suicide bombers had entered the mosque. A witness told AFP that four bombers had been involved, with two triggering explosions at the mosque’s gate.

ISIS’s affiliate within Afghanistan, known as its “Khorasan” province or ISIS-K, is small but highly active, composed of thousands of former Taliban fighters who feel the group’s austere vision of Islamic law does not go far enough.

While both the Taliban and ISIS-K are strongly influenced by Deobandi Sunni ideology, and both groups have historical animosity toward Afghanistan’s minority Shia population, the two movements differ substantially in their objectives. After the Taliban’s capture of Kabul on August 15, it made moves toward ending the nation’s twenty-year war, cooperating with the U.S. military to aid its evacuation and engaging in diplomacy with other nations. The group’s interim government has publicly stated it intends to suspend terrorism within Afghanistan and participate in the international system and has appointed a UN ambassador, although the UN has not extended recognition to the new government. These steps have been opposed by ISIS-K, which shares its parent organization’s interest in creating an Islamic caliphate at war with the Western world. Consequently, despite their religious overlap, the Taliban and ISIS-K have emerged as fierce enemies, and the conflict between them has escalated following the collapse of the former Afghan government.

The mosque bombing represents a setback to the Taliban’s government, which has assumed the responsibility of protecting Afghanistan’s forty million citizens. Although the Taliban government has since dispatched special forces to Kandahar to conduct an inquiry into the incident, the bombing represents a failure in this responsibility. ISIS-K’s motive for the bombing was likely the negative effect it would have on public perceptions of the Taliban as being able to provide security, potentially leading some to turn to ISIS-K for protection.

The Kandahar attack comes only a week after a similar bombing in Kunduz, in northern Afghanistan. In both cases, Shia mosques were targeted during Friday services, when hundreds of people were present.