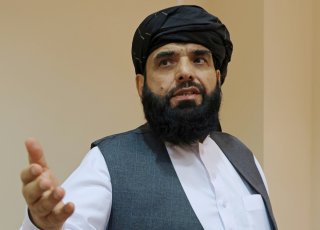 Suhail Shaheen, an English-speaking Taliban spokesman and negotiator at the group’s Doha office, has been nominated as its first Ambassador to the United Nations.

A letter from Amir Khan Muttaqi, the Taliban’s Foreign Minister, to UN Secretary-General Antonio Guterres, announced the appointment, according to Reuters. The letter also requested that Shaheen be allowed to address the UN General Assembly.

The group, which overthrew the U.S.-backed government and reconquered Afghanistan in August, has attempted to shape world opinion by promising to become a responsible member of the international community. Taliban spokesmen and officials have repeatedly underlined that the group does not intend to become a terrorist haven, as it was during the 1990s, but rather a theocratic Islamic state, akin to post-1979 Iran. To that end, it has made a series of promises to curb Afghanistan’s negative external behavior towards other states, including a pledge to eliminate Afghanistan’s opium crop, which is used in ninety percent of the world’s heroin and served as a lucrative source of revenue for the Taliban during its insurgency.

The Taliban’s outreach to the rest of the world has thus far met with a muted response. While some nations have indicated that they will pursue closer commercial relations with the Taliban, including Russia and China, others, including the United Kingdom and Canada, have pledged not to recognize the group as long as its government is not representative of all Afghans and it continues to conduct human rights abuses. These concerns were amplified after the formation of the Taliban’s “interim government,” which entirely excluded women and some Afghan ethnic groups. On Tuesday, the group also appointed its members to a string of other posts, according to Shaheen; predictably, none of them were women.

Most countries have not articulated a position on the Taliban. Many are torn between opposition to the Taliban’s regressive views on human rights and gender equality, but also the recognition that the group is the de facto government of Afghanistan and should be dealt with accordingly. Guterres himself has argued that the Taliban’s desire for diplomatic recognition gives foreign nations some measure of leverage over its human rights policies.

Any decision on whether to formally admit the Taliban’s ambassador to the United Nations would be decided by a nine-member “credential committee,” composed of the United States, Russia, and China, as well as six other nations.

The former Afghan government still maintains its UN ambassador, Ghulam Isaczai, although in practice that government has ceased to exist and Isaczai no longer represents any constituency—a fact that Muttaqi’s letter to Guterres pointed out.