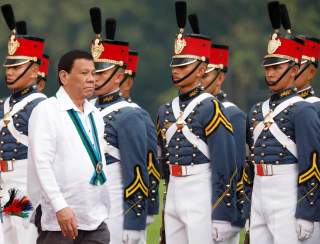 At the heart of the Indo-Pacific region are the disparate nations of Southeast Asia, a dynamic group of post–colonial nations that consciously guard their hard-earned autonomy in a theater of great powers. And at the very core of that pivotal region is the Philippines, which straddles the Western Pacific, the South China Sea, and the interlocking seascapes that constitute the maritime heartland of Asia.

Blessed in geography, Manila stood at the heart of the Galleon trade at the onset of modernity, connecting the New World to the complacent empires of the Orient, which were yet to come to terms with the advent of European imperial expansion.

At the turn of the twentieth century, the Philippines became America’s first and only colony in Asia. And since then, the two nations have become inseparable.

Under America’s relatively benign colonial rule, the Southeast Asian nation, previously part of the Spanish imperium for more than three centuries, transformed into the region’s first liberal democracy and second most developed nation (only behind Japan). At the onset of post–colonial age, the Philippines boasted Southeast Asia’s most modern military, top universities and shiniest public infrastructure, occupying the position the city-state of Singapore enjoys today, albeit writ large.

Though always the junior partner, and never fully forgetting its anti-colonial struggle against Washington, the Philippines never ceased to prove its strategic value to an American-led effort at constructing a liberal order in Asia. The two allies fought side by side throughout the World Wars, with the Philippines serving as a key, dependable partner throughout the hot wars in the Korean Peninsula and Vietnam. The naval and air bases in Subic and Clark in northwestern Philippines constituted America’s biggest overseas military complex throughout the Cold War.

Even the collapse of the Soviet Union, which precipitated the withdrawal of American bases from the Philippines and elsewhere, failed to sever the umbilical cord between the two nations. Anchored by the Philippine-U.S. Mutual Defense Treaty (MDT), a series of new derivative agreements, namely the Visiting Forces Agreement (VFA) and the Enhanced Defense Cooperation Agreement (EDCA), ensured the Philippine-U.S. alliance remain robust and relevant throughout the opening decades of the twenty-first century. Surveys show that the Philippines is the most pro-American nation on earth, at one time rating American role in the world more favorably than even more than Americans themselves.

And yet, the Philippine-U.S. alliance—the oldest in Asia and a linchpin of the regional liberal order—is arguably the most underappreciated in the world. This is due to at least two reasons, namely misplaced emphasis on the rhetoric (rather than actual policy) of incumbent leadership of both countries as well as the necessity to fine-tune and upgrade the alliance for uniquely twenty-first century challenges.

There are countless headlines about the so-called “Quad,” composed of the United States and key regional powers such as Australia, India, and Japan, as the emerging arbiters of the Indo-Pacific strategic theater; the burgeoning ties between Washington and former rivals such as Vietnam; the growing importance of Indonesia as an independent force for stability and prosperity, and the perennial dependability of Singapore as a key American strategic partner.

Then there are many articles about the Philippines’ growing strategic ties with China, its diplomatic tensions with the West, and the Southeast Asian country’s supposed inexorable march away from traditional alliances. Yet, the larger-than-life characters of the men occupying the top offices of each country, namely presidents Donald Trump and Rodrigo Duterte, have obscured the true significance of the bilateral alliance.

Trump’s perceived “America First” unilateralism, raising protectionist barriers and questioning the value of age-old alliances, as well as Duterte’s no-less shocking pro-China rhetoric, accompanied by nonstop tirades against the West, have raised doubts about the depth and endurance of the bilateral alliance.

But leaders can choose to raise or lower the importance attached to ties with another state, but their words can go only so far in obscuring the underlying reality regarding the durability and power of their bonds.

Yet, upon closer examination, neither Trump nor Duterte, two populists who enjoy personal rapport, have significantly downgraded bilateral relations. If anything, the two sides recently agreed to expand the number of their annual joint exercises (from 261 to 281 per year) with growing focus on maritime security threats and war games in the contested South China Sea. Now they should expand the resources for officials on both sides to implement a higher operational tempo for alliance exercises and training.

Make no mistake: The historical bond between the Philippines’ defense establishment and the Pentagon has remained broadly intact. The Philippines remains the biggest beneficiary of America’s Indo-Pacific Foreign Military Financing (FMF) initiative.

Further testimony to a close security relationship is apparent in the story of U.S. support for countering violent extremism, such as the United States quietly supported the government of the Philippines in its quest to establish control over relatively ungoverned spaces in Southern Mindanao and the Sulu Archipelago. After the kidnapping of an American missionary on Palawan in 2001, the allies stood up Task Force 510 and then the Joint Special Operations Task Force—Philippines. U.S. forces bolstered Philippine capabilities to beat back Al Qaeda-linked groups such as the Abu Sayyaf Group and Jemaah Islamiya. And even more recently, the United States provided timely assistance to help defeat the Maute Group in Marawi. Now Washington is aiding the displaced residents and providing $25 million for the essential rebuilding in that war-torn city.

Finally, the future quality of the alliance between the United States and the Philippines is inseparable from the depth of people-to-people ties. There are many linkages across business, education, religion, and culture. But to help create the next generation of leaders in the Philippines across many walks of life, and to bolster the constellation of U.S.-Philippine contacts, the Washington and Manila should adopt a variant of the recent Fulbright University program established in Vietnam. A vibrant network of educated and skilled Filipinos and Americans who understand the Philippines will ensure that the shared interested and vast opportunities can be realized for decades to come.

The second reason for lack of appreciation of the bilateral alliance centers around the need for greater clarity and vitality. One major area of concern, particularly in the Philippines, is the lack of American clarity on the extent of its commitment in the event of conflict in the South China Sea.

Granted, the 1951 Mutual Defense Treaty, particularly article 4, doesn’t indicate an automatic military response to any potential aggression by a third power against the Philippines over disputed land features in the area. Yet, the treaty commitment to consult in the event of threats to the Philippines vastly understates the strategic, economic, political, ideological, and personal factors that would be part of the calculus in Washington’s response.

As Randall Schriver, assistant secretary of defense for Asian and Pacific security affairs, underscored during a visit to the Philippines earlier this year, “We’ll be a good ally. . . . There should be no misunderstanding or lack of clarity on the spirit and the nature of our commitment. . . . We’ll help the Philippines respond accordingly [to any external threat].”

Nonetheless, it’s perhaps high time for Washington under the Trump administration to provide greater assurance about its willingness to deter (i) any aggressive action against Filipino personnel stationed across Philippine-occupied land features as well as (ii) reclamation and militarization of the Philippine-claimed Scarborough Shoal, which lies not too far from the Subic and Clark bases.

The Duterte administration has made it clear that these are its “red lines” in the South China Sea, despite its warming ties with China, thus the importance of American commitment to aid its Southeast Asian ally if and when push comes to shove.

A strong statement about U.S. support for defense of the Philippines under assault would go a long way in reassuring Manila of the dependability of its alliance with America. Moreover, greater U.S. clarity would reassure the Philippines as it seeks to negotiate a mutually satisfactory modus vivendi with China in the South China Sea. To be clear, Manila doesn’t seek to drag American into unwanted, destructive wars, but it needs strong support if it’s to hold its own in ongoing dealings with Beijing. This is fundamentally about a “diplomacy of dissuasion and deterrence” amid Chinese maritime assertiveness. After all, American military support constitutes essential deterrence against external aggression against the Philippines.

And just as Japanese support, port calls, and exchanges with the Philippines increase, so, too, can the further operationalization of the Enhanced Defense Cooperation Agreement (EDCA) between the United States and the Philippines bolster deterrence and defense. It’s important for Manila and Washington to discuss the possibility of granting greater access to American troops in strategically located bases, namely the Bautista and Basa airbases, which are close to the disputed land features in the South China Sea. This wouldn’t only ensure maximum interoperability between the two allies, but also it goes without saying that greater American military presence could serve as a much-needed check on China’s creeping maritime incursion into Philippine waters.