How America Can Repair Its Damaged Relationship with Russia 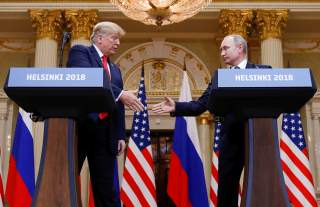 George Beebe’s recent analysis has presented the policy community with a very useful paradigm for understanding recent alleged actions taken by the Russian special services in a number of Western countries: the Skripal Rorshchach test.

Beebe is referring specifically to the attempted murder of former Russian double agent Sergei Skripal on British soil by use of a Soviet-developed nerve agent that sickened him and his daughter and killed several British citizens—amidst growing evidence of the involvement of officers of Russian military intelligence (the GRU). That case can be broadened to encompass a series of computer hacking/information warfare operations that were uncovered in the last several weeks in the UK, the United States, Canada and the Netherlands, which also have been attributed to the GRU. Now the discussion revolves around whether those who have been accused of taking action were doing so in contravention of or in support of the instructions of the Russian state.

In every case, as Beebe points out: “The debate over the . . . evidence pivots on what one is inclined to believe about how Russia’s political system works and what Moscow aims to do in the world.”

I would add a corollary to Beebe’s test: the debate also hinges on the view the government evaluating the evidence has on the desirability of engagement or disengagement with Russia. And, as recent European Union conclaves attempting to forge a coherent policy towards Russia—or the whipsawing in the United States itself between a Trump administration open to dialogue with Russia and a Congress determined to bring maximum pressure on Vladimir Putin’s government—make clear is how locked into pre-existing positions Western approaches to Russia remain.

Arguably since 2007 and Vladimir Putin’s bombshell remarks at the Munich Security Forum, the West has been put on notice that Russia would seek to revise the parameters of the post–Cold War settlement, particularly in Europe and in Eurasia. It would seek to do so cooperatively wherever possible, but by use of both conventional and nonconventional force whenever necessary. Thus, Moscow has been prepared to engage both in conciliatory and hostile behavior with Western countries, sometimes even simultaneously, in pursuing its objectives.

While this approach has not always been successful—with some spectacular miscalculations (such as the fallout from the Russian efforts to interfere with the 2016 U.S. elections)—it has nonetheless given the Kremlin the hallmarks of an overall grand strategy. In revealing remarks at the Moscow Energy Week press conference, Putin quipped that “special services mess with each other all the time” while at the same time calling for improved relations with the West.

The West, on the other hand, approaches its relations with Russia through the prism of what Moscow “should” do rather than what it actually “is” doing. For some countries like Italy, Hungary, Austria, and to a lesser extent Germany and France, Russia “should” be a partner to Europe. Thus, these governments prefer to focus on areas of cooperation with Moscow and thus to minimize cases where Russia’s behavior is far less than constructive. For others—the United States most notably, Russia “should” conduct its domestic and foreign affairs in line with Western values, norms and preferences. When Russia deviates from such standards, the first instinct is to correct and punish. The current intra-Atlantic divergences (both within and between the countries of the West) on policy towards Russia stem from this basic divide—between those who see Russian transgressions as a distraction from Russia’s overall integration with the West versus those who see them as intrinsic to Russian statecraft and policy. So when the GRU is accused of hacking operations, one side is prepared to minimize the seriousness of the charges while the other is prepared to throw away all of the positives of the relationship in order to avenge. Swinging back and forth between these two binary choices does not lead to effective policy.

For the past year, the dialogue for a “Sustainable Bipartisan U.S. Strategy Towards Russia” (informally known as the Mayflower Group) has been grappling with this very dilemma. On the one hand, Russia’s size, geopolitical position and military capabilities mean that the United States does not have the luxury of selective engagement and punishment, enacting penalties against Moscow that carry no costs or risks for the United States. At the same time, the need to sustain strategic stability in the relationship with another major nuclear power does not mean that the United States must meekly submit to all of Russia’s demands.

The discussions have produced the outlines of what might be termed a 3-C paradigm: cooperate, compete and confront. In other words, the United States—and by extension the West—must be able to shift along the 3-C scale, safeguarding cooperation, for instance, in those areas that are vital to both countries (e.g. nuclear non-proliferation) while creating ground rules for areas where the two countries will compete (for instance, in energy sales around the world). Most importantly, the United States must be prepared to confront Russia—but to do so with a clear understanding of the costs and consequences. One of the things that has been quite frustrating in observing the back-and-forth in the U.S. Senate during the August hearings is the insistence on maximum confrontation with Russia in both military and financial terms—but with guarantees that there will be no negative blowback or consequences for the United States. This limitation—frankly admitted by the Obama administration in guiding how it imposed penalties on Moscow—weakens the deterrent impact and has contributed to a feeling in the Kremlin that penalties imposed by the West are survivable.

The problem is that the Russian state takes the West’s protests less seriously than it should—and assumes that continuation of hostile action (such as hacking or poisonings) can continue with manageable consequences. In turn, Russia’s behavior inflames Western politicians who begin to contemplate much more stringent penalties or are prepared to sacrifice even areas of beneficial cooperation in order to punish the Kremlin. This begins to move us into lose-lose territory.

A 3-C approach, guided by a sober assessment of costs and consequences, has the possibility of breaking this dysfunctional cycle. It assumes that enmity between Russia and the West is not inevitable but avoids a partnership at all costs approach. It provides a way to take advantage of openings to improve the relationship but to stand firm against Russian challenges to U.S. interests and values. Yet, at this point, the United States does not appear ready to develop this approach. It requires a degree of flexibility—to be able to impose or lift sanctions—that the Congress is unwilling to grant the president. It also requires an ability to think through priorities—not every Russian transgression or disagreement with Washington merits an all-out response.

Perhaps the midterm elections will stabilize the American political system and lead to a modus vivendi between the president and Congress for the next two years, in which a more sustainable approach to Russia can take root. If not, then the dysfunction that has been observed for the last several years will deepen.