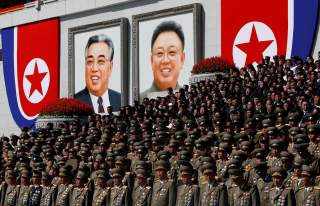 North Korea’s build-up of nuclear weapons and ballistic missiles is disrupting peace in Northeast Asia and may soon plummet Northeast Asia into a serious Cold War—and maybe even a hot war.

While North Korean leader Kim Jong-un has suggested he may be prepared to abandon his nuclear ambitions, there has been no proof that he is serious. But, the United States could take steps to discover Kim’s true intentions.

This is not the first time North Korea has ramped-up its Cold War. From 2012 to 2017, North Korea carried out a series of nuclear weapon and ballistic missile tests that were provocations, profoundly disrupting the peace in Northeast Asia. North Korea especially ramped these up in 2016 and 2017, creating major tensions.

Then in 2018, Kim began a charm offensive that included suspending his nuclear weapon and ballistic missile tests and appeared to volunteer to abandon his nuclear weapons. Through South Korea, Kim asked for a summit meeting with President Donald Trump to negotiate the details.

While Kim’s offers gave the U.S. government sufficient hope to take part in the requested summit meeting, Kim then failed to deliver either denuclearization or plans for it. The level of nuclearization has for decades been measured by the number of nuclear weapons, their destructive potential, and the number of their delivery means (mainly ballistic missiles). There seems to be no evidence that any of these have declined.

Before the summit, Kim directed the building of more powerful nuclear weapons, weapons that may be five to ten times more destructive than earlier North Korea designs. He also allegedly made improvements to several missile bases. Then, shortly after the summit, Kim apparently increased production of fuel for nuclear weapons and continued production of ballistic missiles. These far more powerful weapons may allow North Korea to double the destructive power of its nuclear weapon forces during Kim’s “peace” year of 2018, while diverting outside intervention by claiming denuclearization.

Kim’s actions have thus contradicted his words. He has yet to surrender even one nuclear weapon, and he has not accepted a production halt and monitoring thereof at any of his nuclear weapon (or ballistic missile) production facilities. I suggest that Kim has not frozen his nuclear weapon program and is certainly not abandoning it—he appears to be doing exactly the opposite.

Kim’s behavior has caused many U.S. experts on Korea to question what Kim is doing. Is Kim simply being cautious, waiting to win over hard-liners in North Korea (and if so, what does that say about his control of North Korea)? Or is he just a hard bargainer, trying to get the best deal possible from President Trump? Or is Kim stalling, trying to complete a nuclear missile program that will threaten the United States before the United States takes serious actions to stop him?

We do not know. But U.S. expert opinion seems to be leaning toward the view that Kim is stalling and will not abandon his nuclear weapon program. If U.S. government opinion crystalizes on that explanation, the current peaceful environment in Korea will likely change in two important ways.

Second, the United States may need to enhance deterrence against North Korean nuclear weapon use. In the U.S. 2018 Nuclear Posture Review, the United States was clear that “there is no scenario in which the Kim regime could employ nuclear weapons and survive.” This is a threat to decapitate the North Korean regime, the primary thing Pyongyang worries about. North Korea’s continued nuclearization could force the United States to make this threat more concrete by explaining how it would be achieved. For instance, the regime’s destruction could be achieved by military conquest of the North in which the key regime members would be arrested and then tried for their crimes. But doing so would be a substantial military task that would take months before the arrests would be possible. For much of that period, the regime would likely be able to continue the use of nuclear and other weapons of mass destruction against South Korea or the United States—an unacceptable outcome.

Alternatively, the regime could be decapitated by military attacks after the North uses nuclear weapons. But given the regime’s plans to hide in hardened underground facilities in wartime, this approach would almost certainly require the use of U.S. nuclear weapons. The United States would probably need to target multiple facilities, including two reported to be in Pyongyang, unless it knows Kim’s location with some certainty. This approach could resemble the South Korean strategy of Korea Massive Punishment and Retaliation announced in 2016, and if successful would likely prevent most subsequent North Korean nuclear weapon use. By discussing the U.S. commitment to its decapitation deterrent threat, the United States might convince a paranoid regime that its nuclear weapons are a liability and not the asset it has believed.

Beijing would almost certainly be upset by any of these actions which would risk intervention and conflict with China. Indeed, Beijing has been arguing that sanctions should be relaxed, treating North Korea’s words as being more important than its actions on nuclear dismantlement. The United States could more vigorously define the meaning of nuclear weapon dismantlement and solicit China’s help in getting appropriate North Korean action to avoid these serious consequences.

It may be time for the United States to begin testing Kim Jong-un. If he is sincere about abandoning his nuclear weapon program, he could take steps to demonstrate that sincerity. But if he is tested and he shows that he is just stalling, peace in Northeast Asia will likely be fleeting as he could soon suffer the consequences of his dishonesty.