How China Is Humiliating Pakistan 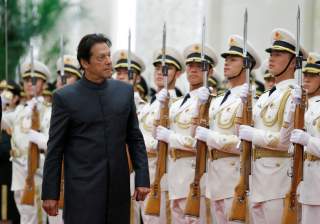 Inside Pakistan, India is an obsession. Communal violence surrounding the 1947 partition of India claimed up to two million lives. India and Pakistan subsequently fought three wars: In 1965, when India retaliated for Pakistani efforts to infiltrate forces into Jammu and Kashmir, in 1971 against the backdrop of the Bangladeshi War of Independence, and again in 1999, when Indian forces pushed back against a Pakistani offensive in Kargil, along the line-of-control. As the late Princeton historian Bernard Lewis pointed out, if scholars embraced the same definition of “refugee” that the United Nations applies to Palestinians who have been displaced by Israel, then South Asia would be home to more than two hundred million refugees. Tensions remain evident across the country. In 2000, in Peshawar, a mockup of a Pakistani nuclear missile stood in the midst of a traffic circle with the slogan “I’d love to enter India” written underneath it. In the Pakistani capital of Islamabad today, giant billboard clocks mark the time since India imposed a curfew on Kashmir.

There is no shortage of anti-Indian animus within Pakistan but in recent months it has been China which has humiliated Pakistan in a manner which India never could. Muhammad Ali Jinnah, the long-time leader of the All-India Muslim League and the founding father of Pakistan, conceived the new country as a land for the Muslims. Because Pakistan based its legitimacy more on religion than on ethnicity, it really is the first Islamic state of the modern era.

Pakistanis have historically been at the forefront of advocacy and action against the oppression of Muslims, real or imagined. This is what guided Pakistan to oppose Soviet designs on Afghanistan. Pakistan is among the most anti-Israel and anti-Semitic countries on earth. The Pakistani press regularly covers the plight of Myanmar’s persecuted Rohingya Muslims. Pakistani charities work in Chechnya. There is no shortage of the terrorist groups Pakistan sponsors who target India and are motivated more by religion than nationalism. And, yet, when it comes to China’s incarceration of more than a million Uighur Muslims—solely because they are Muslim—Pakistani prime minister Imran Khan has been silent on one hand and on the other he has both defended China’s repression of its Muslims and persecuted for China the Uighurs in Pakistan.

Sister city twinning is a common diplomatic practice in order to advance tourism and ties between the world’s major cities. China and Pakistan have taken this to a new level with provincial twining. Recently, Pakistan’s mission in Beijing gave a draft memorandum of understanding to the Chinese foreign ministry in order to establish sister province relations between Xinjiang and Gilgit-Baltistan. Not only, therefore, is Khan cowed by Chinese pressure to the point that he must turn a blind eye to the greatest repression of Muslims in the twenty-first century but he now seeks to honor the Chinese province that is at the epicenter of Chinese anti-Muslim repression. Even if Khan is motivated by the implied threat to treat the people of the disputed Gilgit-Baltistan region like China treats the Xinjiang, that does not paper over the implied endorsement of Beijing’s Islamophobic leadership.

The coronavirus abandonment of Pakistani students in Wuhan further humiliates Pakistan. Almost every other country—including India—has evacuated its citizens from the coronavirus epicenter. While Imran Khan spends a great deal on himself, his foreign travel, and the military, he has left Pakistan’s public health infrastructure a shamble. Khan knows that corruption and disorganization mean that medical quarantine will not work in Pakistan, which is why he seeks to keep those potentially infected abroad. China, meanwhile, cares little for the Pakistanis who remain within its territory. To be Pakistani in the age of Imran Khan means to suffer in silence at the back of the line.

Pakistan’s anti-Americanism greased its turn toward China. China, meanwhile, built for Pakistan highways and a port. Pakistan allowed itself to believe that it had become the crown jewel of China’s belt-and-road policy. Now, reality should set in: Rather than preserve Pakistan’s independence and dignity by playing Beijing and Washington off-each other, successive Pakistani governments have fallen so far under China’s grasp that Pakistan is powerless to stand up for its citizens—let alone Muslims. Pakistan sees itself as a major regional power but recent events show that Beijing considers Pakistan little more than a subordinate colony to be exploited but not heard.