How the Coronavirus Exposed the Flaws in America’s Security Strategy 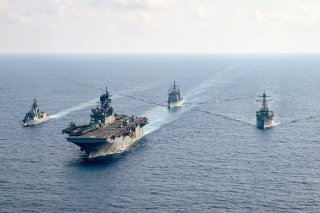 LOOK AROUND. Something has gone terribly awry. Even before the mass disruption caused by COVID-19, the United States was in trouble. Its costly military interventions in Afghanistan and Iraq have faltered, the “liberation” of Libya has resulted in an endless civil war in which the innocent suffer without respite—though not quite as painfully as in Yemen, another problematic foreign venture in which the United States has invested. American troops in Syria sit on a powder keg, with Bashar al-Assad still in power, backed by Russia and Iran, while Turkey dances on the brink of dragging NATO into a broader conflict with them. Meanwhile, the Russians have lopped off Crimea and parts of Donetsk, openly flouting the Budapest Memorandum, which was signed by the United States back in 1994 and guaranteed the territorial integrity of Ukraine in return for Kiev’s expressed willingness to surrender the nukes it retained after the dissolution of the Soviet Union. Then there is China, building up and fortifying its positions in the East and South China Seas in defiance of international law, and cyber-thieving American intellectual property at will. And what of the War on Terror? There has been a dramatic rise in worldwide terrorism since 2001.

An inward glance is just as troubling. The current, COVID-caused economic travails aside, the United States was already drowning in its $23 trillion debt. There are no more fiscal hawks, of any political stripe, and every trillion dollars of fresh debt pushes a recession, if not an outright depression, upon the unborn backs of generations of our descendants. But perhaps even more importantly, there is far too little sense of societal amity to hold the nation together. The deep partisan divide that has poisoned our politics is, we believe, to a significant degree a reflection of greater divisions among Americans more generally in terms of the nature and purpose of governance, individual rights, race relations, and the range of equity issues associated with earnings, access to health care, even the conduct of private life. We also believe that this grave societal malaise, rather than being viewed as an exploitable commodity by competing politicians, should be seen instead for what it truly is: the Achilles’ heel of U.S. grand strategy.

FOR FAR too long, the components of grand strategy have been defined solely in terms of a nation’s military, economic, diplomatic, and—more recently, informational—capabilities and resources. In our view, this misses a critically important dimension: society. Paul Kennedy stands out among those who have shown deep awareness of this dimension, and of its neglect. Indeed, with regard to the social dimension, he has affirmed the importance of “national morale and political culture,” which “are not usually covered” by grand strategies. Even that archon of realpolitik, Machiavelli, acknowledged in The Prince that the social dimension mattered when he wrote: “The best possible ‘fortress’ is – not to be hated by the people … fortresses will not save you if the people hate you.”

What specifically constitutes the social dimension of grand strategy? In domestic terms, it means most of all recognizing that the purpose of all governance—of every type—is the social welfare of the people: ensuring their access to good health care; providing a reasonable chance to prosper; fostering mutual respect; and, more generally, being attuned to the factors that nurture overall well-being. Even totalitarian Soviet governance could exploit its peoples for only so long before “the Union” simply imploded—as George Kennan long ago predicted would happen. And even in Communist China, the mantra of Deng Xiaoping—a maxim picked up by President Xi Jinping—was “We will get rich together!” In much of Europe, “social democracy” puts society well up front, making it hard to consider any notion of crafting national security without reference to the welfare of the people.

Curiously, those charged with governance in the United States have had, and still have, trouble putting people first. In terms of their financial security, the nation with the world’s very largest GDP—at $21 trillion-plus—nevertheless has about half of its more than 330 million people living either in poverty or just one unlucky break away from personal ruin. Much of this financial risk comes from gaps in health care coverage; which brings up the COVID-19 crisis of 2020. The lack of preparedness, despite decades of warnings from aids to sars, and beyond—about viruses’ ability to jump from animals to humans—suggests that senior leaders simply don’t include the social dimension in their thinking about grand strategy.

There is a second face to the social dimension as well: the one that looks outward, to the rest of the world, and which profoundly influences the outcomes of international interactions. All too often, realpolitik adherents focus completely on the balance of relative military and/or economic power when deciding about strategy or policy. In contrast, democracy promotion has been a leading element of U.S. national security policy for decades, as expressed in President Bill Clinton’s 1994 National Security Strategy of Engagement and Enlargement and his Doctrine of Humanitarian Interventions. President George W. Bush followed suit in his 2002 national security strategy, which was even more explicit about using force, “preventatively,” against dictators.

In practice, Bill Clinton forced a dictator to flee Haiti under threat of invasion; but then left that sad land as tortured as ever. George W. Bush hoped that overthrowing Saddam Hussein would allow liberal governance to blossom in the Middle East. Instead, he blew up the balance of power in that region, empowered Iran, and sullied the American image around the world. The problem with these ventures—and the others abovementioned—is that they reflect the omission of the social dimension in the formation of American grand strategy. Simple awareness of the social context in Haiti should have sufficed to convince policymakers that the effort to implant democracy was going to fail in the face of nearly two centuries of predatory rule there. And Iraq as well was stony ground on which to nurture democracy. The U.S. plan ultimately backfired there, given the country’s Shia majority, which meant that any post-invasion government would be aligned more closely with Tehran than Washington.

Efforts to employ armed force to reroute the currents of culture and history—the fundamental building blocks of the social dimension of grand strategy—are destined to fail, at ruinous cost. And they have, regularly. Incorporating an explicitly social perspective into the grand strategy-making process would save cost and alleviate suffering, for Americans and those who have felt the lash of American power.

THEN THERE is the environment. A good grand strategy must consider environmental factors and align them with the other dimensions. Think for a moment of the long preeminence of Great Britain in world affairs, from the latter half of the sixteenth century to the middle of the nineteenth century. This was the age of sail, during which Britain had preponderant sea power, almost without interruption, for three hundred years. But the “wooden walls” that protected Britain and its burgeoning empire quickly denuded the homeland of the trees necessary for shipbuilding. A need arose to exploit colonies for their resources, search for reliable foreign partners, and to try to stretch out the service life of each sailing ship of the line (Nelson’s Victory was forty years old at Trafalgar). British grand strategy was thus highly vulnerable, because of an inability to sustain its own supply of wood.

A more modern example of environmental matters having major implications for grand strategy arose with the atomic age. Initially, the idea of using mass-destructive weaponry as simply another tool of war dominated strategic thought, particularly the idea that a nuclear war could actually be won by the skillful targeting of enemy delivery systems. This notion, known as a “counter-force” strategy, was touted as being able to save 100 million lives. But even if 100 million lives were saved, another hundred million would be lost. Nuclear strategists were simply not paying enough attention to the social dimension; but it was the studies of what atomic and hydrogen bombs would do to the environment—even in the most carefully calibrated counter-force exchange—that finally cooled the ardor for a potential Armageddon. The science associated with predictions about catastrophic environmental effects of even limited nuclear war, including the “nuclear winter” phenomenon, at last had an impact, resulting in Ronald Reagan’s public recognition that “a nuclear war cannot be won and must never be fought.” With this statement, he undid the counterforce strategies. Reagan then shifted American grand strategy from arms racing to arms reductions, and from confronting the Soviets to conciliating, in a series of summits that helped end the Cold War.

Unfortunately, Reagan’s domestic policy agenda failed to demonstrate the same level of insight regarding the environment. For example, in his first budget proposal, he sought to cut funding for the Environmental Protection Agency (EPA) by more than 25 percent. Then his first head of the EPA, Anne Burford, was forced to resign over mismanaging the clean-up of toxic waste sites. Reagan then appointed Anne Gorsuch to succeed her. She in turn strove to weaken pollution standards, the Clean Water Act, and slashed enforcement programs, which delayed efforts to combat long-term problems like global warming, toxic waste, air pollution, and contamination of water supplies. The Reagan administration also pursued an aggressive policy of issuing leases for oil and gas exploration, as well as coal production, on tens of millions of acres of national lands.