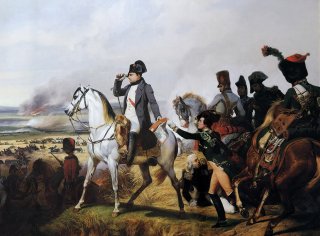 WHAT MAKES leadership charismatic? That question has loomed large since the eighteenth century with transformations wrought by revolution and mass politics. Political hero worship has ties with authoritarian temptations, but it also has a place in the electoral politics of constitutional democracies with their demand for persuasion. Charisma inspires more effectively than rational argument, let alone the currently diminished claims of technical expertise or standing within bureaucratic hierarchies.

In Men on Horseback: The Power of Charisma in the Age of Revolution, David A. Bell gallops through the eighteenth century to trace the modern emergence of charismatic leadership when romanticism met revolutionary politics. Heroic figures captured popular imagination not only through impressive exploits but a sense among their admirers that they expressed the spirit of the age. Indeed, George Washington, Napoleon Bonaparte, and Simon Bolivar, along with Pasquale Paoli and Toussaint Louverture, seemed to guide that spirit. Bell argues that bonds they had with their followers enhanced their ability to shape events and gained them a heroic status as founders of a new order, even if, in some cases, a transitory one. These men on horseback created a new image of leadership in the age of revolution that lasted beyond it. Bell, who is a historian at Princeton University, has written several important books, but this is by far his most ambitious. The result is a superb study.

CHARISMA ORIGINALLY meant a gift of divine favor that subordinated an individual or group to god’s will. Like genius, which referred first to an inspiring spirit or temperament rather than the person who possessed it, the word’s meaning changed. Max Weber secularized charisma during the 1920s as a power-conferring authority to describe a phenomenon he associated with the new demands of mass politics, though his usage captured a long-established dynamic. But conditions that made charismatic leadership a force predated the expanded suffrage, increased literacy, and growing popular media of the late nineteenth century. The parallel phenomenon of celebrity filled an eighteenth-century lacuna left by waning religious enthusiasm. Rather than producing a disenchantment of the world as Weber theorized, Enlightenment secularism redirected the focus of devotion to extraordinary figures who captured the public imagination. Print and visual culture, sometimes including cheap memorabilia, spread their fame. The process fostered a personal identification with heroes which became the hallmark of the charismatic leadership Bell describes as followers bound themselves to his cause.

Paoli made a compelling romantic hero, especially once the greatest biographer of the day popularized his exploits. Now largely forgotten, Paoli’s story inspired more famous imitators who became the models others later followed. Leading Corsica’s effort to secure independence from the Republic of Genoa, which had ruled the island for five centuries, Paoli combined the country’s presidency with command of its army. Genoa, controlling only a few coastal fortresses, transferred its claims to France in a secret 1764 treaty. The French began their campaign to conquer Corsica four years later after declaring its annexation and liquidating the opposition Paoli directed in 1769.

The struggle captured European attention. Besides the geopolitical implication French control over Corsica had for the Mediterranean, popular resistance evoked memories of classical antiquity in a virtuous struggle for republican independence against massive odds. Paoli seemed, in William Pitt the Elder’s description, “one of those men who are no longer to be found but in the Lives of Plutarch.” Bell highlights James Boswell’s role as his publicist which anticipated how the writer later turned a lexicographer, critic, and occasional writer of Anglican sermons into the heroic man of letters Samuel Johnson. Arriving in search of adventure, the credulous Boswell met Paoli who became a cultured and informative host after early suspicion. Their relationship played to the younger man’s infatuation with the picturesque. Close observation enabled him to capture the intimacy of the Corsican leader’s relationship with his followers. Paoli landed a promoter for more than his nation’s cause.

Boswell’s Account of Corsica quickly became a commercial success on its publication in 1768. Reigning monarchs like Frederick the Great and Peter the Great had drawn adulation for their exploits as rulers and generals, but presenting a republican insurgent this way marked an important change. The phrase “father of his country” generally followed from equating the king’s relationship with his realm to that of a father and his family, but here it evokes the role of the founder in an echo of antiquity. Boswell’s intimate portrait reinforced by other writers and the visual culture of prints also reflected its own time with an emphasis on the feeling that bound followers to their hero. Appealing to an age of sensibility, it reframed customary idioms of representation in a new way that sold Paoli as a man of sense with whom people could identify. That identification reinforced his standing as a statesman exiled in London. What Bell describes as a media revolution of the eighteenth century turned a celebrity into a charismatic leader by giving him a standing long reserved to kings and princes.

Paoli’s renown provided Americans, who had named a town in Pennsylvania for him, a ready comparison for Washington and their own revolution. The high public reputation Washington enjoyed from his arrival to command the Continental Army outside Boston in June 1775 weathered setbacks and defeats in a war struggle whose outcome remained in question until the final campaign at Yorktown in 1781. He embodied the American Revolution. Although brave and decisive, particularly in crossing the Delaware at a pivotal moment in late 1776, Washington was hardly among the great commanders of the day. Rather, his greatest triumph was simply to maintain the Continental Army as a fighting force and raise its effectiveness until victory won in cooperation with the French compelled Britain to capitulate. Nevertheless, the combination of political skill, management of the war effort, and personal leadership made him the indispensable man for the glorious cause of independence.

WASHINGTON FIT the role particularly well as the epitome of an English gentleman translated into the rougher, competitive environment of Colonial Virginia. An exceptionally able horseman, Washington stood taller than most contemporaries and drew notice for his strength and athleticism. Politeness and self-possession defined a persona matched by a commanding physical presence. Frontier exploits had made his reputation, but he also learned from British officers during the Seven Years War and internalized aspects of their professional military ethos. He fashioned himself, in the title of Stephen Brumwell’s biography, into a “gentleman warrior” who impressed Americans, Europeans, and Indians alike. Benjamin Rush, later a critic of Washington who privately urged his removal from command, believed that his martial deportment was so impressive that “there is not a king in Europe that would not look like a valet de chambre by his side.”

Standing for election to Virginia’s House of Burgesses, not to mention his rise through colonial society, taught Washington other lessons. Colonial elections, like parliamentary elections in Britain, involved appealing for support, often from social inferiors, both face-to-face and on the hustings. Gaining the confidence of voters counted for more than persuading them on any particular issue. Washington imbibed the give and take of politics while carrying earlier lessons from military service on the value of inspiring confidence into a different context. Charisma enabling him to command any room he entered differed from the charismatic leadership Bell explores, but it won Washington the loyalty of aides and subordinates whose efforts became a force multiplier during his command. It also gave admirers the material to fashion him as a national hero.

“The burgeoning cult of the commander in chief derived less from his own achievements,” Bell argues, “than from the longings of his fellow citizens.” Washington filled a space left by the toppling of George III as a republican icon fighting for independence. Paoli offered a recent template, along with Roman models and biblical figures like Moses and Joshua, that Americans used to make him a particular kind of hero by amplifying personal virtues. Only Benjamin Franklin, the celebrity savant who turned a performance as an American original at the Court of Versailles to diplomatic advantage, matched Washington’s fame. But as the paradigmatic man on horseback, the general personified charismatic leadership in the American Revolution.

Washington put his own stamp on the image. British observers who likened the American Revolution’s early stages in New England to an earlier struggle at home during the 1640s cast Washington in the unwelcome role of Oliver Cromwell, the “bold, bad man” who rose to lead parliament’s army, behead Charles I, and later seized power himself. Rather than Cromwell or Julius Caesar, Washington imitated Cincinnatus. Besides stepping down from commanding the army, Washington preempted a conspiracy at Newburgh by officers aiming to demand concessions from Congress. His actions helped preserve civilian authority at a difficult moment. George III told the painter Benjamin West that such restraint would make Washington “the greatest man in the world.” Serving only two terms as president later set a lasting precedent that showed him the servant of the fledgling state rather than its master. It became part of the brand.