How Dangerous Is Putin's Russia? 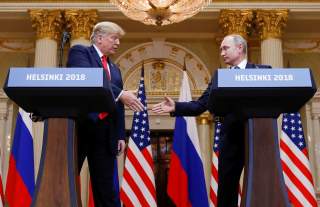 Enough about Russia already. If one likes ballet or nineteenth century literature, one could understand having a Russia obsession. Maybe some people have an unusual affinity for snow and cold, having a particular passion for ice hockey or luge. Perhaps then, this could be comprehended. If one trades in commodities, such as gas or wheat or timber, for a living maybe one could be forgiven.

For those of us working in the national-security field, it’s true that there are some new developments, such as another successful test of the “Kinzhal” hypersonic missile—that can strike NATO ships at ranges up to eight hundred kilometers. But the system is most likely defensive in nature and, after all, Russia’s defense spending is a paltry 11 percent (or maybe even less) of U.S. military outlays. That figure, of course, does not include the aggregate sum of NATO allies’ arms expenditures alongside of the United States that makes the total NATO-Russia asymmetry of power even more stunningly lopsided.

Yet none of the above explanations offer a plausible explanation for how it is that almost all major U.S. newspapers have written profusely, breathlessly, and—let’s be honest—nauseatingly on this subject, for at least the last two years, without any end in sight. By now, most Americans are likely convinced that Russia is a country full of hackers, homophobes, hooligans, hookers, and, lest anyone forget, spies. In three decades of traveling to Russia, that is not what I have seen [Я сам этого не видел]. Has all the newsprint in our American papers on Russia in these years made us any wiser? What if all that journalistic energy had been devoted to the complex nuances of the ongoing U.S. national crises in education and health care and infrastructure, not to mention the ultra sensitive and yet somehow perennially neglected issue of racial injustice?

Journalists can perhaps be forgiven for taking a surficial view of the bilateral U.S.-Russia relationship—crisply dividing the subject into “good guys versus bad guys,” rather than adopting the realist framework of parsing national interests that actually reveals a decent alignment. For the most part, those writing about Russia in the American media have no special training in Russia (language, history, etc.), nor any advanced schooling in the complexities of diplomacy either. They, therefore, consistently fail to understand that some stolen emails constitute a minute and even trivial issue when compared with a nuclear arms rivalry that will cost both countries trillions of dollars and could also pave the road to global apocalypse. They cannot seem to grasp that a single troll factory is just the tip of the iceberg in a larger “information war” that has continued for more than half a century, but that the resulting mindless blather is of little consequence against the all too real nuclear proliferation crises that continue to roil Northeast Asia and the Persian Gulf. These reporters and their editors somehow do not comprehend that a campaign advisors’ financial dealings from long ago or a Russian graduate student’s liaisons with conservative political groups, while perhaps titillating and reinforcing TV-constructed stereotypes, are actually several quantum leaps more insignificant than the fate of tens of millions of miserable citizens of Syria (not to mention all the refugees), awaiting a genuinely viable truce among the great and regional powers. Let’s not even pause to review other similarly tragic situation, such as Afghanistan or Yemen, which could also benefit from U.S.-Russia strategic cooperation (or at least a cooling of hot rivalry).

Enough about Helsinki already. Well, maybe not quite. I will attempt to take this analysis on a (brief) path not yet taken. Trump made an interesting and possibly revealing remark when he stated prior to the meeting with Putin that he intended to discuss, among several other issues, China and “our mutual friend President Xi.” It remains unknown what exactly it is about China that Trump wished to discuss with Putin. That did not come up in any of the subsequent press conferences. However, one may justifiably speculate, given the current and intense bout of Sinophobia now fashionable at the White House (on issues ranging from trade to Taiwan to North Korea) that Trump may have sought to gauge Putin’s willingness to talk about possibly shared concerns regarding China’s rise.

As it happens, such an idea would not be completely far-fetched since there are Russians that are extremely concerned about the ascent of the eastern colossus. After all, the Middle Kingdom is much more proximate to Russia than to America—to state the obvious. Indeed, the Russian national-security commentator Alexander Chramshikin wrote a fascinating, high-profile article a few months back that starkly warned the Kremlin against its pro-China inclinations. The piece asserted that “too actively cooperating with Peking would lead to long-term problems for Moscow [Слишком активное сотрудничество с Пекином создает Москве долгосрочные проблемы].” In a promising and refreshingly candid discussion about European security, this Russian analyst appears to admit that Kremlin strategic actions against Europe have been quite over the top: “If the goal is to intimidate Europe, then that is senseless. Europe is so intimidated by us that it is on the verge of fainting . . . but it is not in any way threatening us.” [Если целью было запугать Запад, то это бессмысленно. Европа и так запугана нами почти до обморока . . . но она нам . . . ничем не угрожает].” Yet, Chramshikin is not quite a “softy” either, as he says Russia’s intervention in Syria was absolutely necessary and he even goes so far as to say Moscow must put aside sentimental attachments and treat Kiev as a genuine enemy, such that the “farce” of the Minsk Agreement can now be finally dispensed with, once and for all. Yet, his overall conception (that is decidedly not politically correct in Moscow) may nevertheless have appeal for American conservatives since he maintains that “For us, China constitutes the most serious threat [Китай для нас—главная внешняя угроза].”

Chramshikin contends that China covets Russia’s resources and also territory. He claims that the supposed partnership between Moscow and Beijing has resulted in no benefit and only “troubles that are worse and worse because of the starkly unequal (in Beijing’s favor) bilateral relationship [вреда все больше и больше. Во-первых, из-за крайне неравноправного (в пользу Пекина, разумеется) характера двусторонних отношений].” He views the pro-China tilt in Kremlin policy as a straight-jacket that inhibits better relations with other Asian powers, including both Japan and India, as well as the ASEAN countries. In working closely with China, he asserts that Russia is “digging its own grave [роем себе могилу].” Above all, he is against the Kremlin having to make a dichotomous choice between the West and China, fearing that the choice may involve a dreaded capitulation to one or the other. In the end, he seems to believe that Russia must resign itself to defense “in all directions [по всем азимутам],” noting that the new Kinzhal and Sarmat missile programs are a good start on that ominous and obviously expensive project. Again, many American strategists could be pleased to see Russian analysts opining about the “China threat” and hinting that the West is a logical partner within some kind of larger anti-China framework. For my part, I would strongly caution against the seductions of the “Kissinger move in reverse”—if one harkens back to U.S. policy from the 1970s. First, Chramshikin may lack for an objective perspective. It is noteworthy that he presents no actual evidence regarding his assertions on Chinese revisionism with respect to Russian territory, nor Chinese foul play in commercial practices related to Russian resources. To the contrary, it is worth asking what the Russian economy would look like today without trade and investment from China. I am told by various sources, for example, that Chinese investment in Russia is substantially underreported. Indeed, there are signs of major new strategic synergies between Moscow and Beijing at present. Second, a related point is that Chramshikin’s perspective seems to be in the minority as most of the Russian foreign-policy elite accept the imperative for close ties with Beijing. A rather more enlightened U.S. perspective will be one that recognizes that U.S. interests are not injured by close and continuing China-Russia cooperation, and the United States is actually more likely to be taken seriously as a partner if it ceases trying to play one Asian giant off the other—a variation of the old British colonial tactic of “divide and rule.”

Returning to the subject of the crisis in U.S.-Russian relations, most everyone somehow considers the Helsinki summit a travesty or worse, but they are wrong. To the contrary, the president’s decision to go ahead with the summit was actually brave and obviously supports the broader goal of world peace—not exactly a minor issue. If there was a major problem with the Summit, it was way too short. Could the presidents be expected to make progress on nuclear arms control, nuclear proliferation, regional crises, counterterrorism, and commercial ties in the space of a few hours? Such important summits should take place over a few days not hours (and the same goes for U.S.-China summits, of course), spending more time on substantive talks and less distracted by the media circus. American journalists, along with the “Blob” seem to want badly that American presidents spend more time with “friends” and less time with competitors. Yet, that approach belies the obvious point that there is less to discuss among countries that are generally agreed on issues, world views, etc. In other words, U.S. presidents need to spend more time with competitors (or adversarial) regimes in order to bring about change on key issues of importance. That would indeed constitute the “Art of the Deal” and yet the jury is still certainly out on whether this administration can “walk the walk” on that score—with doubts mounting that they have the requisite attention for detail and institutional competence. For his part, President Trump may wish for advisors less interested in contradicting his agenda and more focused on delivering actual policy results for the American people, whether arms control agreements or creative and realistic peace proposals to mitigate regional crises.