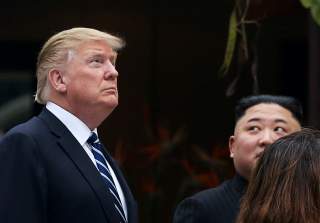 The second reason might have something to do with recent U.S. domestic politics. Washington changed its mind—or more likely, President Trump changed his—potentially for a very specific reason. With Congressional Democrats planning to embarrass Trump while he was in Hanoi, holding their hearing on the Michael Cohen saga during the first day of the summit, Trump may have decided a change in strategy was needed to not only change the dynamic, but torpedo a deal that would only hurt him domestically.

Put yourself in Trump’s shoes. You know that progressives will attack nearly any deal that is not incredibly tough on North Korea—and perhaps never be satisfied no matter what bargain is hatched. Conservatives, especially hardcore neoconservatives or Boltonesque Jacksonians, will only support a hardline denuclearization agreement that is essentially akin to a North Korean military surrender. Who then would support a peace declaration, liaisons offices or just a first step toward denuclearization? Considering the polarization of U.S. domestic politics, the answer is simple: nearly no one. In the context of what was happening back home, and with the Mueller report’s results still unknown, Trump may have gambled that he would gain nothing by making concessions to Pyongyang—at least not at that specific moment.

Here is where things might have gone sour. Trump may have calculated that if he couldn’t get North Korea to bend to a grand bargain—or the total elimination of Pyongyang’s nuclear, chemical and biological weapons for full sanctions relief—then he should walk out on purpose. He may have assumed that he could look tough and show up the Democrats or neoconservatives, either by making history and getting a mega-deal with Kim or by walking out. Either way, he might have decided weeks ago that he needed a “win,” his domestic political fortunes trumping everything else.

While the deal that was eventually scrapped—the closure of the Yongbyon nuclear facility for large amounts of sanctions relief was less than perfect—Trump could have easily tried to negotiate something more to his liking that would have been not only more politically viable but more in line with his FFVD approach. He could have quite possibly made a deal for Yongbyon with less sanctions relief than Kim was looking for. One possibility would have been to trade three of five UN Security Council resolutions that the north wanted lifted for an agreement to fully support all inter-Korean economic development projects presently under consideration. Such a deal would have brought tens of billions of dollars in economic development to North Korea. And if snapback provisions were built into the deal—which some reports indicate as something Trump considered to ensure that Kim wouldn’t be rewarded should he decide to squirm his way out of an agreement—the risks to American interests and allies would have been small.

THE GOOD news is that if Trump’s main reason for holding out at Hanoi was domestic political considerations, then the conclusion of the Mueller probe—with Trump apparently cleared of the most serious charges of collusion with Russia—could help to revivify the peace process with the north. In fact, there is no reason the deal that may have been brewing before the Hanoi summit could not be reconstituted.

If we can move past maximalist demands such as FFVD and maximum pressure, then there are many different policy paths to consider that would clearly lessen the overall threat posed by North Korea. There is a clear blueprint to usher in a new era of peace on the Korean Peninsula, protect our allies in the region and offer a real chance at seeing North Korea give up its nuclear weapons, or, at the very least, mitigate the threat they pose. None of these ideas are new and have been mentioned in press reports over the past weeks and months, clearly building on the Singapore summit last June. Packaged together, Washington and Pyongyang could finally end what has been officially a seven-decade state of war and ensure that the events of 2017—a near nuclear war—have no chance of ever happening again.

First, Washington needs to make Pyongyang understand that America is not an enemy, has no desire to overthrow its regime and that it can trust that what we say we will do. To do that, Trump must set the conditions whereby Kim feels comfortable enough that he can, at the very least, begin to consider the process of denuclearization. If Washington were to sign with Pyongyang a simple political declaration ending the Korean War, Kim would have the proof he needs to not only trust our intent but to go back to his own people—especially those in the military or leadership circles—and say that America no longer has any hostile intent and our relationship has changed. Trump would be able to do the same and claim a historic win—maybe even that Nobel Prize he clearly would love to build a legacy on.

Next, we should ensure that we can communicate with the Kim regime—especially if another crisis were to erupt. To do that, both sides should establish small liaison offices in each other’s capital to ensure there is never any break in the ability to send messages to one another. This would allow for near instant communication to ensure that important ideas and agreements do not take days to travel from one part of the world to another.

There will be resistance to this. Some will argue this is a de facto type of diplomatic recognition, or essentially the creation of embassies. Perhaps. But with North Korea potentially having the capability to strike the United States with nuclear weapons thanks to its advances in long-range missile technology, being able to understand their thinking in near real-time is important. It also allows the north to get a better window into our own diplomatic strategies and national security thinking as well as our own unique culture, ensuring they do not misperceive our intent. There is no weakness in wanting to have a dialogue with those you have differences of opinion with when those differences could spill over into armed conflict. If that were that case, we would not have diplomatic relations with Russia, China and many other nations we disagree with.

Third, the world must see the first steps toward the north abjuring its nuclear weapons, or at least showing its intention to mitigate such a threat if nuclear disarmament is not possible in the short to medium term. The formula to do that is well known by now, as Kim has already put the Yongbyon nuclear facility up for dismantlement if Washington would offer what Kim described last September as “corresponding measures”—or what can only be considered as sanctions relief.

Here is where South Korean president Moon Jae-in can be of assistance, helping facilitate a path towards U.S.-North Korea détente while improving his own relations with the Kim regime. In speaking to President Trump just after Hanoi, Moon offered to move forward on inter-Korean economic projects that would be worth billions of dollars. Considering North Korea’s economy is only worth $16 billion dollars—half the size of Vermont’s—such an economic shot in the arm would be tempting to the Kim regime. My bet is that the North would jump at the opportunity and all sides would clearly get something they want.

Finally, we should not forget about those Americans—over seven thousand soldiers who are still “unaccounted for”—who served their country valiantly during the Korean War. Given that there are also many North Korean soldiers whose status was also never resolved, both nations should step up efforts to solve these cases once and for all. Washington and Pyongyang should form joint teams that can work together and excavate the battlefields and areas where it is likely remains can be found. History tells us not only that this can build important trust between nations, but also heal the wounds of an old war, much as it did when Vietnam and America embarked in such efforts before diplomatic relations were restored.

History tells us none of this will be easy, but peace and reconciliation never are. I myself was dumbfounded when President Trump announced he would meet with Chairman Kim. At the time I called it a “Hail Mary” in an interview on prime-time U.S. television—not exactly a ringing endorsement.

I was wrong. What I failed to see—along with those on the left or right who are against any dialogue with North Korea to this day—is that finding a way to develop a lasting peace regime, something that will likely take years to establish, is in America’s and our allies’ own national interest. While we may not be able to guarantee North Korea ever gives up its nuclear or other weapons of mass destruction, we can do a lot to ensure that the threat those weapons represent can be lessened. Perhaps a lasting peace regime can take hold on the Korean Peninsula, finally bringing to a close one of the last chapters of the Cold War.