How Emmanuel Macron Could Face a 2022 Populist Upset 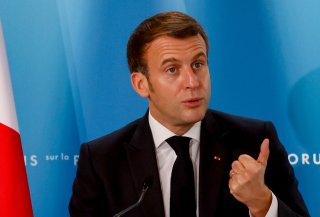 For Remembrance Day, French president Emmanuel Macron met up with his predecessors, his Socialist Party ex-boss François Hollande, and the right-wing Nicolas Sarkozy. Despite the fact that Hollande and Sarkozy were in office not too long ago (three years ago for Hollande and eight for Sarkozy), they very much symbolize a political order that no longer exists—one structured by a dominant center-right party and a dominant Socialist Party. In the wake of this old order, France is dominated by Emmanuel Macron’s seemingly one-man party—with few of the politicians in Macron’s En Marche (EM) having built a strong national profile—and Marine Le Pen’s Rassemblement National (RN) party.

Anyone with a good grasp on French politics will thus safely bet on a Macron-Le Pen rematch in the runoff of the 2022 presidential election, with Macron convincingly beating her in all polls. No one in the French political landscape seems capable of upsetting that scenario. The once-formidable Parti Socialiste (PS) is unlikely to even field a candidate, and will probably try to build a “union of the left” of which it would be a mere cog. The Greens want to lead that union, but while they are a rising force, their performance in presidential elections has always been dismal. The Far Left candidate Jean-Luc Mélenchon, who was only six hundred thousand votes away from a runoff with Macron in 2017, has been plagued by scandals and erratic political maneuvering that can only be described as self-sabotage.

On the Right, Sarkozy’s former party Les Républicains (LR) still has many elected officials, with a plurality of seats in the Senate and the second-largest parliamentary group in the National Assembly. However, they have been stuck between a rock and a hard place, with moderate elements attracted by Macron’s orbit while more hardline politicians have started to join the RN (in smaller numbers). LR could well end up supporting former LR politicians, such as the head of the Ile-de-France region, Valérie Pécresse, or the head of the Hauts-de-France region, Xavier Bertrand.

None of the major scenarios that could put a wrench into a Macron and Le Pen rematch has stood the test of pollsters (who, unlike their American counterparts, were remarkably accurate in the previous election cycle). A “union of the left,” which would be a feat given how bitterly divided the Left remains despite its waning influence, would be far behind Le Pen and Macron. The Far Left tribune Mélenchon, who has many enmities among socialists and greens, would only garner 15 percent of the vote if he somehow managed to unite the Left around him. Center-right candidates polled are hardly reaching double-digit figures (with the notable exception of Bertrand, who nonetheless remains in third position). LR remains suffocated by Macron’s shift to the Right, as it struggles to differentiate its platform.

France’s presidential election system encourages the existence of a multi-party system— campaign spending is strictly capped at 16.8 million euros, 21.8 million for the finalists, and all parties that garner at least 5 percent of the vote are reimbursed—but the runoff system creates a polarization among two dominant parties. For a long time, it was the Socialists and the Gaullists. Now it seems that we have a confrontation between the Macronists and the LePenists.

And yet recent presidential elections provide an interesting insight. French voters take a vicious pleasure in tearing up what the established scenario is eighteen months ahead of the presidential election. Eighteen months ahead of the 2017 election, no one thought Macron would run for the presidency, let alone win. In 2010, then IMF director Dominique Strauss-Kahn was expected to win the Socialist primary ahead of the 2012 election and defeat an unpopular Sarkozy, but he was arrested after his alleged rape in New York City. In 2005, no one expected Ségolène Royal to edge out the Socialist “elephants” in the primary, while Sarkozy was still battling hard with his rivals on the Right. In 2000, no one would have thought Marine’s father, Jean-Marie le Pen, would reach the second round. And so on in 1993, 1986, 1979…

An IFOP poll in September illustrated how fragile the apparently dominant Macron-Le Pen rematch scenario was. Despite both candidates expected to capture a combined 50 to 60 percent of the vote, 68 percent of the French do not want a Macron-Le Pen runoff, with only the supporters of the RN hoping for such a scenario. Back in 2015, when a Hollande-Sarkozy rematch in 2017 seemed like a strong possibility (in the end, neither even made it to the first round), polls had already found that a rematch was equally unpopular.

French pollster and essayist Jerôme Sainte-Marie provides in his book Bloc contre bloc considerable data to back what he considers to be a class conflict on a scale unseen in French history since the nineteenth century. Interestingly, Hollande and Sarkozy both enjoyed measured support levels that were largely similar across all social categories, from the blue-collar to the white-collar, in good and hard times. In contrast, Macron’s popularity is totally divorced across social categories, with the wealthiest and most educated segments of the population supporting him in record numbers, while working-class voters reject him in equally impressive fashion. This divorce echoes a larger feeling that there is a form of class warfare structuring French politics. The country’s generous social redistribution schemes and stable levels of inequality compared with other European countries have not made up for a deepening sense of malaise and relegation expressed by authors like Michel Houellebecq or essayists like Christophe Guilluy.

Sainte-Marie highlights the uncomfortable fact that, in 2013, 64 percent thought there was a class struggle in France, when only 44 percent agreed in 1967, on the eve of the famous May events in 1968 that rocked Charles de Gaulle’s presidency.

This increasing structuration across class lines has benefitted Macron, as he managed to unite what Sainte-Marie calls an “elitist block.” This is constituted of former center-right and center-left voters who had been long divided by social issues and political traditions but were increasingly similar in their worldviews and experiences (something that David Goodhart also analyzes in his distinction of anywheres and somewheres). This is akin to how the left-wing revolutionaries-turned-wealthy-bourgeois and the right-wing nobility ended up forgetting their old animosities and united in 1830 to back the bourgeois King of the French Louis-Phillipe.

Macron’s advantage is that the “popular bloc” has not yet found its political translation. “Populist” voters on the Left and Right are divided by political taboos, and attempts to create such a united bloc have been tried unsuccessfully in the past (most notably in 2002 by former Socialist minister Jean-Pierre Chevènement). Many of them vote for the RN, but the party’s toxic reputation makes a large populist alliance with elements of the Left and Right unlikely at best. The popular bloc also suffers from lower turnout in contrast with the elitist bloc.

The Gilets Jaunes (GJ) movement has been the closest thing to a unification of this popular bloc. Angered by an environmental tax on fuel, working and middle-class citizens from rural areas and small towns (what Christophe Guilluy labeled “peripheral France”) united to protest the tax. The GJ later ballooned into a larger movement against excessive taxation and what they considered to be a form of social and cultural relegation, protesting in Paris every Saturday for months. The support for the protests was massive, on a scale unseen in France for decades. It hovered between 60 and 80 percent, even despite the regular violence the protests sparked. The support was near-unanimous in “peripheral” France.

Such were tensions that, in the early days of December 2018, there was a positively revolutionary atmosphere in Paris, with Macron’s security forces on high alert and a helicopter ready if necessary. Macron was on the verge of acting out the famous tradition of monarchs forced to flee Paris under popular pressure, from Louis XVI in 1791 to de Gaulle in 1968 (the latter in a helicopter rather than a carriage).

The movement has provided the groundwork for a larger populist realignment. In many ways, it was a revolt of the “somewheres” against what they saw as an increasingly arrogant and disconnected “anywhere” president. While part of the furor was Macron paying for the price for his predecessors’ mistakes, his own repeated gaffes and off-cuff remarks on working-class voters cemented a profound resentment unseen in recent history. Hollande, even when his polls reached single digits, triggered mere disdain among voters, rather than the deep and profound hatred Macron faces.

The GJ movement has now largely faded. Its chaotic and fragmented attempts to become a political force went nowhere. And yet, despite the violence and failed political transformation, support for the GJ remains consistently above 50 percent. More importantly, many of those that protested or identified with the GJ have developed some sort of collective identity—a feeling of belonging to a powerful group. One so powerful, in fact, that it was capable of forcing a president focused largely on supply-side reforms and aiming to stay within the EU’s deficit requirements to open the coffers and greenlight €25 billion in public spending. This feeling of collective belonging and strength is a sleeping revolutionary force in French politics.