How a Flood Revealed the Rot Within Iraqi Kurdistan 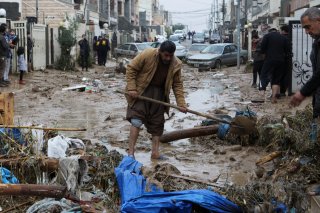 On December 17, 2021, Erbil attracted media attention when it was hit by a flood that claimed fourteen lives and displaced hundreds of people. The flood revealed what is wrong with the region, and it showed how man-made mistakes rather than nature were to blame for the fallout.

The extent of the flood’s severity was exacerbated by Kurdish authorities’ mismanagement and corruption. It also showed how Kurdish authorities are continuously failing to meet the demands of Iraqi Kurds. Recently, another fiasco in the region grabbed international attention when thousands of Iraqi Kurds swarmed the Polish-Belarusian border due to a lack of jobs and opportunities.

Erbil, or “Hawler” as it is called in Kurdish, is the capital of the autonomous region of Iraqi Kurdistan. But despite Erbil’s vast development, the city is divided into two parts—rich and poor. While the native people of Hawler suffer in their own city, Erbil sports luxurious residential neighborhoods with many skyscrapers that distinguish it from the rest of Iraq. The city has become a safe refuge for many Arabs escaping other dangerous, unstable Iraqi cities.

Erbil has a dry temperature and it borders Middle East’s largest desert, the Arabian Desert. The yearly precipitation rate is less than 500 millimeters. The region is facing a drought for two consecutive years. Yet the city flooded twice in 2021. Although climate change has a role to play, the failure on the part of the authorities to avoid such calamities is unequivocal.

A ten-month-old infant died in the incident, causing a national uproar. “He was in his father’s arms when the water took him” stated the infant’s mother. So far, the infant’s body is missing, and a total of fourteen people have lost their lives and hundreds have become refugees. The flood destroyed hundreds of thousands of dollars worth of property, including 700 vehicles, inundating neighborhoods that are inhabited by lower and middle classes. Rich neighborhoods were unaffected.

Flooding is rare in Erbil’s history. Around fifteen millimeters of rain fell with a low intensity, but the city’s lack of infrastructure resulted in excess water having nowhere to drain, leading to flooding.

Despite the Kurdistan Region of Iraq (KRI) being an oil-rich region with a relatively small population of six million, the Erbil municipality has not appropriated a budget for water drainage infrastructure. Natural drainage canals have been filled or turned into buildings without building any canals in their stead. Lands appropriated to water drainage systems and water canals were illegally granted to businesses and people connected to the political establishment—a practice that is widespread in the city.

Ali Hama Salih, a KRI lawmaker and lead corruption investigator, showed a natural water canal that was destroyed by another Kurdistan Democratic Party (KDP) leader so a market and gas station could be built. He attributed the flood to various similar projects that have been built on water canals in Erbil. Salih stated that a residential complex named Zaytun City, which is owned by a man connected to a senior KDP leader, was built on the water canals, and has blocked the canal. Such projects prevent discharges of excess water and cause flood.

An elderly man who lost his son in the flood reprimanded the government for his son’s death. “My son lost his life because the authorities destroyed my animal farm and expropriated my land while many who are connected received land and I had to come to this place which lies near a natural water canal” he stated.

The neighborhoods to the north are home to millionaires and powerful politicians. Most rich Iraqis and politicians own residences and businesses in that part of the city, which was unaffected because the government has built drainage canals there. If anything, the flood extolls the emerging class conflict in Iraqi Kurdistan.

For the past seven years, Iraqi Kurdistan’s government has not paid its employees on time as salaries tend to be paid every fifty to seventy days. The government employs almost 1.2 million out of 6 million people comprising 90 percent of the total employed workforce. It makes the state employees the backbone of the KRI’s economy. However, with salaries gone the middle class has almost disappeared, creating rampant inequality.

The KDP rules Erbil and maintains tight control over the city’s security services. Its area of control is known as the Yellow Zone, named after the dominant color of its flag. The Yellow Zone includes the governorates of Hawler and Duhok, while the KRI covers Dohuk, Erbil and Sulaymaniyah governorates in northern Iraq. Sulaymaniyah, or Slemani as it’s called in Kurdish, is controlled by the Patriotic Union of Kurdistan (PUK). The region is divided between five main parties that control most businesses in the region and use their revenues to buy and control supporters.

The region is effectively divided into two city-states: Hawler and Slemani. As people in Hawler were grieving their dead, Slemani hosted an International Film festival. This shows how divided and unsympathetic Kurds in Slemani have become to their Hawler brethren. Further, a lack of a KDP-PUK political agreement has deepened the division.

Social media was filled with comments that mocked Hawler’s and KDP’s failure. Many charities that aided the people of Hawler are either owned or backed by the political parties that siphon off state revenue and who are to blame for the disaster.

Such disasters have resulted in some Kurds preferring foreign occupation over autonomy and independence. On the anniversary of Saddam Hussein’s death, many Kurds didn’t hide their desire for the former dictator to come back on social media. Some made his image their profile picture. The KDP is known for its Kurdayati or Kurdishness discourses which work for the development and independence of Kurdistan.

Kurds are one of the most persecuted nations throughout history. Recent incidents such as flooding and mass immigration exemplify that corruption, division, and mismanagement are a security challenge, and not only a governance one. As the autonomous Kurdish region is surrounded by many regional and international conflicts, such as the re-emergence of ISIS and conflict between Turkey and the Kurdistan Workers’ Party (PKK), the region’s future lies in its unity and political and economic development.

Farhang Faraydoon Namdar is a researcher and journalist covering the Middle East. His work has been published in the Jerusalem Post, The National Interest, and various Kurdish magazines. He is the former Editor-in-Chief of Birst Newspaper. He has translated books and articles including Francis Fukuyama’s State-Building into Kurdish. Currently, Farhang is head of foreign relations at the Kurdish Social Democratic Youth Organization.