How Harry and Meghan Have Weaponized Cancel Culture 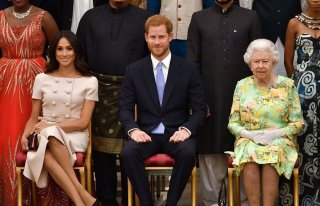 "I panicked, felt blindsided, got defensive & allowed my fear & horror of being accused of being racist take over," Sharon Osbourne cried, for the sin of defending her old friend Piers Morgan, who was hounded out of his TV spot in “Good Morning Britain” by a government body, for the medieval crime of criticizing a duchess after she complained about his tone. Nothing quite possibly captures the zeitgeist quite so much as this.

For the uninitiated, a thin-skinned D-lister celebrity gave an interview to her billionaire talk show host friend about how austere aristocratic codes made her feel suffocated. This resulted in another talk show host, Piers Morgan, complaining on live television that there was a distinct possibility that the aforementioned celeb and her husband were perhaps full of it. Morgan’s exact phrase was that he “didn’t believe a word” of what Meghan Markle said. That bizarrely led to Meghan Markle complaining to the overarching supervisory media watchdog in Britain, which then led, nolens volens, to Morgan being fired.

Enter Osbourne. Out of nowhere, Osbourne, who is a friend of Morgan, tweeted that she stands with him. After relentless criticism for that single tweet, she was invited to the American talk show “The Talk,” where co-host Sheryl Underwood wanted her to publicly denounce her friend. Unexpectedly cornered by this Beria-like tactic, Osbourne resisted valiantly and broke down publicly, resulting in a PR mess. No doubt prompted by her agent, she then wrote a long-winded and incoherent apology, which she then posted on Twitter.

"To anyone of color that I offended and/or to anyone that feels confused or let down by what I said, I am truly sorry...” Osbourne wrote, "There are very few things that hurt my heart more than racism so to feel associated with that spun me fast. I am not perfect”—who is?—“I am still learning like the rest of us & will continue to learn, listen and do better." One can imagine the rest. By now these combinations of words are so predictable that one can imagine there is a template somewhere that automatically churns out such apologies. Morgan, who never once was credibly accused of being silent on anything, broke his silence and tweeted that Osbourne was bullied to apologize, and that was that.

The self-loathing of the bourgeoisie is not the issue here, nor is the PR-speak of the wife of a former anti-establishment rocker shocking. Sharon Osbourne is of course not having any change of heart, nor should she as she did nothing wrong in defending her friend. Quite the contrary. Morgan himself is the victim here, as flawed though he might be, it is his right to criticize the lesser nobles. Englishmen fought long and hard to earn the right to criticize and mock the nobility. The aristocracy in the United Kingdom is based on a mutual if tacit understanding that they can lead their lives without interfering in the affairs of the commoners, and the commoners can mock them, and they’d accept it stoically.

Hollywood celebrities, as well as the new emerging elite of racial equity, are not used to that social contract. Both Meghan Markle, and any random Black Lives Matters leader, for example, have one thing in common. They are used to being worshipped and adulated, and never questioned, much less criticized or opposed politically. The moment those two realities collide, as they will increasingly, the more such overt bullying tactics will be observable.

Ultimately, however, there is a theoretical issue at stake. There is always a hierarchy, in every society, and there will always be until mankind runs its course. Milton defended free speech in Areopagitica by noting, “I cannot praise a fugitive and cloistered virtue, unexercised and unbreathed, that never sallies out and sees her adversary, but slinks out of the race where that immortal garland is to be run for, not without dust and heat.”

What we are observing now is once again a new emerging hierarchy backed by a new totalitarian and frightfully evangelical faith—one which perhaps will turn out to be a lot more bellicose than the old school detached aristocracy based on bloodline, heritage, and silent duty towards the nation. Because this new hierarchy is unchained and uncontrolled, it’s all noblesse and no oblige. The subjugation of Morgan and the humiliation of Osbourne is reminiscent of the old liberal bourgeoisie during the Reign of Terror when those who worked to dismantle the social structure and hierarchy of the ancien régime, found themselves under the blades of a new and much more capricious ruling elite.