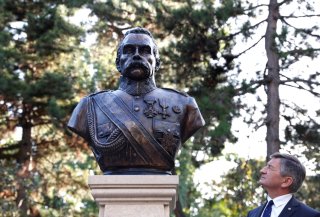 EASTERN EUROPE occupies an increasingly prominent place in American foreign policy. The United States is a treaty ally of Poland, Lithuania, Latvia, Estonia, Slovakia, Hungary, Bulgaria, and Romania. Through NATO, it has an Article 5 commitment to defend these countries if they are attacked. Having kept Ukraine at arm’s length on NATO accession since 2014, when Russia started its war against Ukraine, Washington has become the biggest supplier of military aid to Kyiv. U.S. intelligence helped Ukraine to survive the first few weeks of Russia’s February 2022 invasion, just as it has materially helped Ukraine to fight the war. The United States is more active in Eastern Europe than France, Germany, and the United Kingdom, Europe’s major military powers. If Russia loses, the United States will be the region’s dominant power. It will have the most allies, the most diplomatic say, the most on-the-ground clout.

American influence in Eastern Europe is not without precedent. Woodrow Wilson bestowed the phrase “ethnic self-determination” on the peoples of Eastern Europe. He did so just as four massive empires—Russian, German, Ottoman, and Austro-Hungarian—collapsed and the hope for a new mode of Eastern European nationhood emerged. (Today the central train station in Prague is named after Woodrow Wilson, in honor of his contributions to the Czech nation.) Then came a long hiatus. Washington did nothing in 1939, when Adolf Hitler initiated World War II by attacking Poland. Nor could President Harry Truman do much more than watch as a victorious Soviet Union subjugated one ethnically self-determined state after another in Eastern Europe. In the 1980s, the United States took its revenge on Joseph Stalin, exploiting nationalism and anti-communism in Poland and elsewhere to bedevil the Soviet Union. Mikhail Gorbachev never found a way to manage these complications.

In 2022, the degree of U.S. engagement in Eastern Europe was unwilled by Washington. When Ukraine endured the first round of Russia’s war in 2014 and 2015, the United States had the goal of “Europeanizing” the conflict. Hence the diplomacy meant to terminate the war—it would come to be known as “Minsk” after the Belorussian capital city in which it was negotiated—was led by France and Germany. Their job was to help Ukraine negotiate with Russia. Forget Dayton, Ohio. Forget a sleepless Richard Holbrooke corralling the leaders of the Balkans and restoring Europe to peace. “Minsk” was to signify the hour of Europe in Europe; but this hoped-for hour of Europe never came. “Minsk” failed. War returned in 2022 and with it the United States.

Given the enormous military and financial outlay the United States is making in Ukraine, the importance of U.S. actions to the war in Ukraine, and the large impact the United States will have on whatever postwar settlement comes into being, both policymakers and U.S. citizens should be thinking carefully about the history of Eastern Europe. This history is not well known in the United States, where Europe often means Western Europe and where the reservoir of historical references and analogies is tacitly Western European: Versailles as in the 1919 treaty of Versailles; Munich as in the appeasement of Hitler in the late 1930s; the Marshall Plan as in the assistance the United States gave to Western European nations after World War II; and nato itself, which extends across Europe in 2022, but as its very name indicates was originally rooted in the “North Atlantic,” in Europe’s West. At the same time that policy questions related to Ukraine are being debated, so too should the historical questions related to Eastern Europe be reviewed.

JOSHUA D. ZIMMERMAN’S Jozef Pilsudski: Founding Father of Modern Poland is a well-timed book. Zimmerman holds the Eli and Diana Zborowksi Chair in Holocaust Studies and Eastern European Jewish Studies at Yeshiva University. Pilsudski, who died in 1935, has no connection to the Holocaust, but he does stand at the center of interwar Eastern European history. This well-researched and clearly written biography sheds light on the emergence of an independent Poland, which without Pilsudski might never have existed. It is also a meditation on the confluence of ethnic, religious, national, and imperial history that is Eastern Europe. Pilsudski, the founding father of modern Poland, spent much of his life trying to figure out the conundrum of Eastern European ethno-politics and worried about either Russian or German power. Even with his military daring and his brilliant statesmanship, he could find only a temporary solution to the dilemma of Polish security or, rather, of Polish independence.

Pilsudski was born in 1867 in the far west of the Russian empire. His parents had married in 1863, the years of a Polish uprising against Russian autocracy. The abortive uprising haunted Pilsudski—its bravery and its audacity and its failure all left a deep impression on him. Pilsudski’s mother instilled in him a love of Polish poetry, which in the 1870s described a nation in words and in waiting—not least because Poland itself had been partitioned by Russia, Austria-Hungary, and Prussia in the late eighteenth century. Pilsudski grew up near the formerly Polish city of Wilna, which is today the capital city of Lithuania, Vilnius, and to which its many nineteenth-century Jewish inhabitants referred as Vilna. The Russian authorities who controlled the city spelled its name in Cyrillic letters. They thought of it as Russian, and that was the state of affairs the young Pilsudski devoted himself to overturning.

Pilsudski was not only a nationalist. In Vilnius, he joined “a circle of socialist youth,” Zimmerman writes. Pilsudski cared sincerely about the problems of the working class, but socialism spoke as well to a separate problem set: how to handle the patchwork quilt of religions and languages and ethnicities in Vilnius and in the larger region. No clear line on the map separated Poles from Lithuanians from Ukrainians from Jews from Belarusians from Russians. They lived among each other, and in Pilsudski’s eyes socialism gave them common cause. Socialism was not an alternative to Polish nationalism for Pilsudski; it was a necessary complement. By 1887, Pilsudski’s dedication to socialism was conspicuous enough to merit a trip to Siberia, where in classic prisoner’s fashion he met and learned from “two generations of Polish nationalist and socialist leaders.”

For decades, Pilsudski led a life on the run. He wrote journalism in the name of Polish independence. He traveled. He escaped from prison in Saint Petersburg. In his life and career, opposition to tsarist rule was the thread, as was Pilsudski’s dream of “a large, multinational federal state,” which would one day house Jews, Ukrainians, Belorussians, and of course Poles—a latter-day Polish-Lithuanian Commonwealth. A powerhouse in early-modern Europe, the Commonwealth was a multi-ethnic, multi-confessional republic that by 1795 fell victim to partition. Pilsudski’s opposition to tsarism was also an opposition to authoritarianism. An admirer of Britain and the United States, he espoused the virtues of parliamentary democracy. A rival to Pilsudski’s vision was that of Roman Dmowski’s, who created the National League in 1893 and who sought a homogeneous Polish state, in which Jews and other minorities would not have equal footing with Poles.

Pilsudski’s gift for foresight led him to build a Polish army before there was a Polish state. He formed a Riflemen’s Association in 1910. When World War I broke out, Pilsudski lent his Polish legions to the Austro-Hungarian army. At the same time, Dmowski aligned himself with the “pro-Russia and pro-Entente camp” among Poles, betting they would win the war. Tsar Nicholas II was promising him much greater autonomy than Poles had had before the war. In 1914, Russia had advanced quickly eastward until the war turned in 1915—on the eastern front. In 1915, the celebrated Polish pianist Ignacy Paderewski met with Woodrow Wilson’s close adviser Edward House. It was a meaningful encounter. “The United States was the only great power to have endorsed Polish independence prior to entering the war,” Zimmerman notes. The ascendant United States would find itself among the victors in World War I.

Pilsudski had a good war. It was not that Austria-Hungary triumphed; Pilsudski’s good fortune was the vanishing of imperial Russia. In 1918, he had been arrested and imprisoned by the German authorities, turning him into “a potent symbol of national unity.” He was a romantic figure, and not just in his taste for poetry. He left prison with Europe in turmoil and his life-long dream on the cusp of realization. The Bolsheviks had taken charge in Russia; Imperial Germany was no more. Although Ukrainians and Poles were fighting one another in 1918 and anti-Jewish violence was flaring, Pilsudski could create a Polish state and imbue it with “his unambiguous support for constitutional, parliamentary government, support for rule of law, and for minority rights,” as Zimmerman writes. Rule of law would vex Pilsudski, but about minority rights, he was truly unambiguous. The matter of borders and, over time, of Poland’s position between Germany and Russia was the bigger challenge. So was the relationship between an independent Poland and an independent Lithuania.