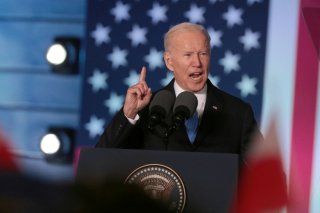 WARSAW, Poland—“Be not afraid,” President Joe Biden said in his fiery speech at the Royal Castle in Warsaw on March 25, 2022, exactly one month after Russian president Vladimir Putin’s armed forces invaded Ukraine. Biden’s visit to Poland was part of a series of intensive back-to-back meetings with the leaders of NATO, the Group of Seven Industrialized countries (G-7), and the twenty-seven-member European Union (EU).

As the Catholic U.S. president invoked the famous phrase of the late Polish-born Pope John Paul II during his visit to Warsaw, the Russian Federation’s missiles destroyed targets in western Ukraine next to the Polish border on the very same day—sending an unequivocal message to the United States and its global partners.

Choosing Poland for Biden’s historical speech was no coincidence. Poland is a frontline country for both NATO and the EU. Since the outbreak of the war, almost three million Ukrainians have crossed the border with Poland—making it the biggest host for Ukrainian refugees.

Interestingly, Poland being a frontline country is nothing new. In World War I, Poland was a battlefield in a war between Germany and the Austro-Hungarian Empire on one side and Tsarist Russia on the other. Twenty years later, WWII started with Nazi Germany’s attack on Poland in September 1939. The tragedy resulted in the death of over six million Polish citizens, including more than three million Polish Jews. It is quite conceivable that a possible World War III might also go through Poland.

When U.S. secretary of state Antony Blinken and Defense Secretary Lloyd Austin returned to Poland after their secrecy-shrouded visit to meet with Ukrainian president Volodymyr Zelenskyy in Kyiv on April 24, Russian foreign minister Sergei Lavrov warned against an “imminent WWIII.” Ironically, however, Russia has not until now called its war against Ukraine a “war,” but simply a “military operation.”

It is indeed a global war already. In Warsaw, Biden reiterated that the unprovoked war in Ukraine is part of a global struggle “between democracy and autocracy, between liberty and oppression, between a rules-based order and one governed by brute force.” This “great battle for freedom” will define the future of the world and it will not be an easy one. With those words, Biden appealed to the global community—clearly echoing the celebrated Truman Doctrine.

Biden’s Update of the Seventy-Five-Year-Old Doctrine

In February 1946, George Kennan, the American charge d’affaires in Moscow, sent a famous “long telegram” to Washington sharing his observations about the Soviet system and the threat of communist expansion. His telegram provided the primary underpinning for the Truman Doctrine, whose aim was to contain communist expansion at the dawn of the Cold War.

Addressing the Joint Session of the U.S. Congress on March 12, 1947, President Harry S. Truman announced that “every nation must choose between alternative ways of life.” It is a choice between “the will of the majority” that guarantees individual liberty, freedom of speech and religion, and freedom from political oppression, or “the power relied on terror and oppression” that is forcibly imposed with the control of media, fixed elections, and the suppression of personal freedoms.

U.S. containment policy was implemented for the first time in 1949 by providing aid to Greece and Turkey which, as the Truman White House believed, would save these countries from falling into the hands of communists. Soon afterward, the Greek crisis was resolved; both countries joined the newly created NATO security alliance. As a result, together with the Marshall Plan, which aimed at rebuilding postwar Europe, the Truman Doctrine defined the U.S. containment policy throughout the Cold War.

At the seventy-fifth anniversary of the Truman Doctrine, the global community now witnesses a similar conflict unfolding. Even though the Soviet Union collapsed over thirty years ago, Russia is yet again trying to expand its former territory westward, pushing its borders to NATO’s eastern frontier, formed by Poland and the three Baltic states of Estonia, Latvia, and Lithuania. Like in the past, it is more than a regional conflict; it is a proxy war between democracy and autocracy.

Poland at a Crossroads

Extending the Truman Doctrine to preserve the essential principles of a free society, Biden henceforth invited like-minded countries to “defeat democracy’s mortal foes.” Poland, as the place of his historic speech, had profound symbolic meaning and purpose. While Poland strategically remains NATO’s critical ally during Russia’s expanding war in Ukraine and beyond to Moldova, the Warsaw government hardly fits elegantly into the undisputed league of exemplary democracies.

Since 2015, the Polish authorities illustrated the lack of commitment to the rule of law, democratic values, and the freedom of the press. Warsaw’s right-wing Law and Justice (PiS) party and its coalition government’s sweeping changes to the judicial system violated the EU’s democratic standards; thus, Brussel has blocked €36 billion post-Covid-19 recovery loans and grants to Poland.

Tapping into these prevailing undercurrents, apart from invoking the pope, Biden also purposefully summoned former Polish president Lech Wałęsa in his Warsaw speech. He essentially reminded the Poles that their government is trying to impose changes to the historical remembrance of the Solidarity Movement and its democratic transformation by eliminating Wałęsa from public memory. It seems that the U.S. president was fully aware of the legacy of Wałęsa, whose contributions had systematically been erased from official school handbooks. Indeed, Poland’s democratic foundation has gradually eroded since the PiS coalition took power in 2015. According to the 2021 Global Democracy Index, Poland has become “the most autocratizing country” in the world.

Invoking the Catholic and Solidarity leaders in his speech, Biden sent a coded but unmistakably clear message to the government leaders in Warsaw. In other words, he consciously sensitized the nature of American-style culture war in Poland and the Polish government’s stance against the established democratic norms.

The democratic and universal values must first be defended and strengthened in the bastion of democracy: the United States. After four years of President Donald Trump, who supported autocratic leaders like Putin and undermined democratically-elected leaders like Zelenskyy, Biden inherited a herculean task ahead to regain the credibility of adhering to the American ideals.

After Hillary Clinton lost the electoral college vote but won the popular vote over Trump, Senator Tim Kaine, Clinton’s vice-presidential candidate, described the need for a renewed foreign policy. In his pivotal Foreign Affairs article in 2017, “A New Truman Doctrine: Grand Strategy in a Hyperconnected World,” Kaine wrote about the tendency of Trump’s “America first” policy and articulated the value of coherent and bipartisan foreign policy strategy that balances America’s “greatness through goodness.”

Upholding his Inaugural Speech, President Biden is now revitalizing the tradition of the Truman Doctrine that “we lead not by the example of our power but by the power of our example.” The Biden White House has galvanized democratic world leaders to extend their military, economic, diplomatic, and moral support for Ukraine through Poland and other NATO partners. In response, the U.S. Congress approved an unprecedented $6.5 billion for military assistance in March as part of $13.6 billion for Ukraine and its allies. On April 28, Biden asked Congress to approve an additional $33 billion for military, economic, and humanitarian aid to Ukraine. The president also requested the power to seize and sell the assets of wealthy Russians, claiming to support Ukraine and its “fight for freedom.”

Poland remains a frontline NATO member and an important American partner to challenge Russia’s ongoing aggression, reported war crimes, and corruption. However, the Biden administration must focus on Poland not only as a European ally but also as a credible democratic nation. Thus, both the United States and the EU must engage and assist Poland instructively—especially in political, economic, and military realms. The United States, its G-7 allies, and the EU should use this window of opportunity to decisively convince the Warsaw authorities to legitimize their actions in line with democratic values and universal norms—particularly when the Polish government is accused of constituting “draconian“ legislations over abortion and human rights restrictions vis-à-vis the LGBT community, and the negations of the treaty obligations with the EU.

Poland should be the shining example of democratic triumph on NATO’s eastern flank and primarily even for more vulnerable countries—like the Baltic states. Poland still has a thriving civil society that defends democratic freedoms tirelessly. While the United States and its democratic allies are engaged in “the great battle for democracy,” they must not overlook the nature of anti-democratic governance by the right-wing leaders in Warsaw. There is no strategic necessity that would justify the blind support for the Polish autocratization—or sacrifice democracy for the support of an important allied country. Like in the United States, the New Truman Doctrine should also flourish in Poland.

Dr. Patrick Mendis, a former American diplomat and a NATO military professor, is currently a distinguished visiting professor of transatlantic relations at the University of Warsaw in Poland. Dr. Antonina Luszczykiewicz, a Fulbright scholar, is an assistant professor at the Jagiellonian University in Krakow—Poland. Both served as Taiwan fellows of the Ministry of Foreign Affairs of the Republic of China. The views expressed in this analysis do not represent the official positions of their current or past affiliations or governments.