How to Leverage Technology Against America’s Coronavirus Crisis 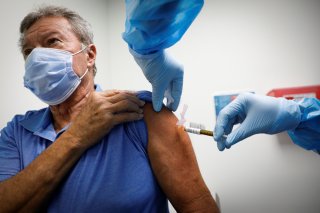 Ten months into the coronavirus pandemic’s grip on the United States, public health experts are sounding the alarm over mounting infections and deaths signaling the country’s most serious phase of the pandemic to date. Recent statistics estimate the loss of one life every thirty seconds; indeed, Jan. 7 set the record for the deadliest day in our fight against the virus, topping four thousand deaths for the first time.

Even as the first vaccines are distributed across the country the pandemic will continue to rage in the coming months, which officials warn could mean a total of 450,000 deaths before February. Meanwhile, the U.S. healthcare system is under unprecedented stress and the capacity of states to respond to and restrain the spread of the coronavirus is at a critical point in the country’s fight against this pandemic. A newly-discovered extra contagious variant of the virus recently appeared in the United States and has the potential to change most aspects of a U.S. response. In the coming weeks and months, as a new administration prepares to marshal resources and works to become fully operational in combating this virus, every day counts and technology may help to save lives in the lead up to Inauguration Day. In an all-hands-on-deck moment, it’s time to revisit the wildcard issue of digital contact tracing.

During the initial surge of the pandemic, as life started to change across the globe, digital contact tracing was seen as somewhat of an untested tool to augment manual contact tracing efforts. Contact tracing, a vital part of the public health toolkit, is a method of contacting people known to be in close contact with infected individuals. As states considered digital options, many rightly had questions surrounding the effectiveness and security of a solution versus the investment and likelihood of adoption. Would people trust a government-developed app enough to use it regularly? Would a solution be accurate enough to be effective? Should states choose a location-tracking system (like using geolocational cell phone data) or a proximity-based one (using Bluetooth technology), and what investments would have to be made? These were only some of the questions for many dealing with significant unknowns, which remained all but unanswered in the absence of a national coordinating strategy. Even so, first adopters built an ecosystem to test the potential of digital contact tracing as part of their virus mitigation efforts. Google and Apple, in partnership with MIT PACT, developed a novel privacy-preserving yet complicated Exposure Notification system for states to adopt. Other states instead developed and rolled out their own contact tracing apps in partnership with small technology vendors.

While the Exposure Notification solution promised privacy, it left the states to deal with a complex list of processes and systems to create or reconfigure, which made a heavy investment in building out the necessary ecosystem less compelling to many. States were required to develop an app to sit atop the smartphone operating system, and the use of decentralized servers made it impossible to notify users of potential exposure when crossing state lines.

Fortunately, these barriers have since been lifted. This fall, Apple and Google launched Exposure Notification Express (ENE), giving states an integrated solution that no longer requires the development of a software application, but one that state public health authorities could simply customize to their needs and implement rapidly. Apple and Google also committed to supporting states who had already developed their own. The Association of Public Health Laboratories (APHL) stepped up to host a national anonymized key server to support exposure notification across state lines. These changes ease the technical burden on states to build, execute, and integrate the elements needed for digital contact tracing.

States that adopted the original Google and Apple Exposure Notification system early on found success in integrating this technology into a broader contact tracing strategy, something we recommended in a report released this summer. States that have already begun to adopt ENE report the ability to contact more people via exposure notifications on their handheld devices, which may mean the potential to curb infections by 15 percent and deaths by 11 percent. This is an important point, given reports that many people aren’t answering unrecognized numbers on the other—by opting into ENE on individual devices, people may be more likely to respond to a text message or call from their state public health authorities. Between pandemic fatigue and feelings of guilt or embarrassment for testing positive or coming into contact with others, ENE could offer discretion in determining exposure to infected individuals. It can also bolster traditional tracing efforts with a comprehensive list of potential contacts, including those we do not know, but to whom we may have been exposed. In this current surge, with a need for more contract tracers as tracing programs work furiously to keep up with growing infections, this technology can quickly boost direly needed capacity. And most critically, out-of-the-box implementation has been reported to take as little as two weeks.

Now that Google and Apple and the APHL have made digital contact tracing easier than ever with Exposure Notification Express and national key server, states should consider adding this solution to their coronavirus toolkit. Implementation must still include transparency and engagement with the public, and it must be integrated with testing efforts. In the critical days and weeks before the new administration takes the helm. Additionally, as infections continue the steady climb upward, states can now stand up this capability quickly and effectively, with proven examples from other states to adopt. If implementing and testing ENE means saving more lives, then it's worth doing now, at this vital time.

Maria Barsallo Lynch is the executive director of the Defending Digital Democracy Project at the Harvard Kennedy School’s Belfer Center.

Lauren Zabierek is the executive director of the Cyber Project at Harvard Kennedy School’s Belfer Center.