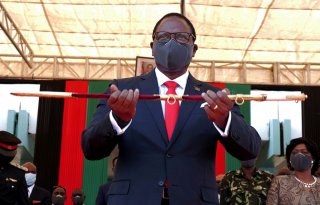 On February 16, 2021, Secretary of State Antony Blinken spoke by video to a gathering of Sahel presidents and foreign ministers. “As ISIS and al-Qaeda affiliates seek to expand their reach across Africa, the United States will continue to work closely with our African partners,” he remarked while noting: “Tactical counterterrorism work is essential. But on its own, we know it is not enough.”

He is, of course, correct. But while Blinken stressed the need for economic development and better public services, these are impossible to obtain absent basic security. Too often, however, U.S. counterterrorism policy misses the mark. The Obama administration’s reliance on drone warfare essentially encouraged whack-a-mole counterterrorism and antagonized local populations, while President Donald Trump’s disdain for train-and-assist missions exacerbated security vacuums.

Nevertheless, there is a third way that Blinken could encourage the shoring up of local institutions, regional integration, and the injection of assistance into local economies without overwhelming their capacity to absorb it. To be sure, simply infusing aid into regional governments or defense ministries often catalyzes corruption. The United States, for example, has spent several billion dollars in support of Somalia’s military, much of which Mogadishu has diverted or wasted. Currently, Somalia is both the world’s most corrupt country and remains among the least secure.

Rather than prioritize a bilateral approach to African security, President Joe Biden’s national security team should build upon and support the existing national security structure of successful African states. In particular, while the southern African nation of Malawi may not normally make headlines in the United States, it is a paragon for the type of security partner the United States should seek to target. The country is both secure and generally free, with Freedom House ranking it above both Mexico and Ukraine. It is also small enough so as not to engender the distrust of other African states.

Malawi is also home to one of Africa’s most professional, apolitical, and effective military forces. Drawing its origins from the British King’s African Rifles during the country’s time as a British protectorate, the Malawian Defence Force has generally played a positive role in domestic affairs. In 1993, for instance, it was at the forefront of breaking up Hastings Banda’s dictatorship along with his paramilitary wing, the Malawi Young Pioneers. During the 2012 Malawian constitutional crisis, in which a number of the country’s cabinet ministers attempted to circumvent then-Vice President Joyce Banda’s constitutional succession following the death of President Bingu wa Mutharika, the army ensured a smooth transition of power. Most recently, Malawian forces protected protestors during demonstrations following disputed presidential elections in 2019.

The United States is already an important military partner for Malawi and has helped support the professionalization of the Malawian Defence Force. From conducting joint military exercises to training and equipping Malawi peacekeeping forces through the Global Peace Operations Initiative, U.S. Africa Command (AFRICOM) and Malawi have, as stated by the United States Embassy in Lilongwe, one of the “busiest military relationships in southern Africa.” Moreover, as one U.S. Army Special Forces captain observed following a Joint Combined Exchange Training session between the U.S. military and the Malawian Defence Forces, Malawians “were by far the most capable, professional and proficient soldiers our detachment has had the pleasure to train with on the continent of Africa.”

Importantly, the Malawian armed forces play an amplifying stability role on the continent. Malawi presently provides over 900 uniformed personnel to support international peacekeeping operations in places such as the Democratic Republic of the Congo, Côte d’Ivoire, and Darfur. And while the majority of these forces are traditional combat-trained peacekeeping soldiers, the Malawians also contribute personnel with unique skill sets, such as its female engagement teams designed to address the needs of women and children.

Why not build on success and work through existing, local institutions rather than reinvent the wheel with each country’s defense and counterterror needs? In 2017, the Malawian Defence Forces, working in cooperation with AFRICOM, hosted “Africa Endeavor,” a summit to convene senior leaders from across the continent as well as a technology exposition to encourage standardization and best communication practices for peacekeeping operations. That same year, Lilongwe held the 2017 African Land Forces summit, to bring together African land force chiefs to work together on “cooperative solutions to regional and transregional challenges and threats.” In 2019, Malawi was the site of the AFRICOM-sponsored Accountability Colloquium designed to promote a collaborative setting in which military commanders and their legal advisors from across the African continent can interface on issues regarding continental military operations. The Malawian Defence Forces’ Sergeant Majors Academy already trains international students from across Africa. By subsidizing other national contingents to train in Malawi and to build the capacity of the Malawian Defence Forces’ Academy, AFRICOM could encourage communication and ties between the security apparatuses of African states, support Malawi itself, and do so at a fraction of the cost of existing programs while mitigating the potential for corruption. Local courses taught by African instructors and incorporating local best practices also provide a more appropriate, relevant, and cheaper education than hosting mid-level officers in American staff colleges.

Partnership with and subsidization of military staff colleges such as Malawi’s will also help the United States compete against the backdrop of great power competition. Russia has increased its military footprint on the continent, highlighted by its signing of military deals with nineteen African countries since 2014. And in 2017, China opened its first overseas military base in Djibouti. Using military education to develop lasting relations can serve to restrain Moscow and Beijing’s growing influence on the continent.

The late Secretary of State George Shultz once noted that diplomacy is akin to gardening in that working towards security and prosperity requires persistence in developing fruitful relationships and extracting the “weeds.” Africa is fertile ground to grow relationships. But rather than re-sow the fields from scratch, the Biden administration might find some of its best success by working through Malawi to tap into southern Africa’s growing and positive experience with military education.

Jackson Krase is a recent graduate from the University of Richmond.

The U.S. Military vs. Russia and China in Africa: Who Is Winning?