How Realistic are Colombia’s Plans for ‘Total Peace?’ 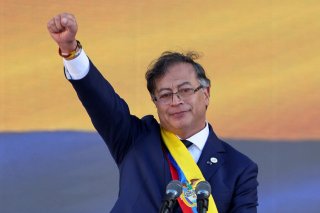 Colombian president Gustavo Petro has announced plans to seek “total peace” with those armed groups which did not participate in the 2016 peace agreement with the FARC—the Revolutionary Armed Forces of Colombia—the country’s largest leftist insurgent group. Petro wants an agreement with an array of entities, notably the ELN—the National Liberation Army—the principal remaining leftist guerrilla force, but also with breakaway factions of the FARC which did not accept the 2016 deal as well as with armed drug trafficking organizations.

Petro’s ambitions are breathtaking in scope, especially given the tortuous history of the negotiations with the FARC. For now, he enjoys the support of Colombia’s public and Congress in his efforts. But he faces some difficult realities, and his efforts seem to be based on assumptions which may thwart its realization.

A History of Violence

Both geography and history present significant obstacles to “total peace.” Colombia is larger than New York and New England together. Within it the Andes are divided into three separate mountain ranges, cutting the country into multiple, isolated regions. Its climate ranges from highland plateaus to dense jungles and even desert areas. Rivers are the only arteries for transportation in parts of the country. All of this means that establishing a state presence, be it for security or social services, has always presented major challenges.

In this environment, the use of force by political actors has been common. Starting in 1948, the country endured ten years of unrest known simply as “la violencia” in which militias associated with the rival old-line Liberal and Conservative Parties terrorized the countryside. Eventually, a power-sharing agreement was worked out, but in this disturbed environment, the FARC emerged as a rural Marxist guerrilla movement in the early 1960s.

While largely ignored for years by Bogotá-based elites, the FARC expanded as Colombia became a major cocaine producer, and it both demanded tribute from drug trafficking organizations and directly went into cocaine production and distribution. The FARC grew to around 18,000 fighters and became the dominant force in much of rural Colombia.

Eventually, the state was able to gain the upper hand, aided by massive U.S. assistance to its military and police forces. The army and police underwent internal reforms and received consistent domestic political support, leading them to shake off their previous lethargy. They inflicted severe damage on the FARC and reclaimed large areas it had previously dominated. In 2016, after difficult negotiations, then-President Juan Manuel Santos reached an agreement for the FARC to end its insurgency, give up its weapons, and enter normal democratic political life.

The peace agreement, over 300 pages long, was extremely complex and ambitious.

It called for FARC fighters to assemble in specific places and hand over their weapons where various programs for their sustenance and reintegration into society would be offered. A regime of “transitional Justice” would be established in which FARC fighters who had committed human rights violations would be tried and receive relatively reduced penalties.

Extensive rural development and land titling programs were to be established. Seats were to be reserved in Congress for the FARC which was to be converted into a political party. NGOs were contracted to monitor implementation. The Colombian public, broadly hostile to the FARC, initially rejected the peace agreement in a referendum. It was subsequently revised to tighten up certain provisions, and was then submitted not to a second referendum, but to Congress, where it was passed.

Parallel to the agreement with the FARC, the drug trafficker-supported armed militias were offered reduced penalties if they were to disarm and submit themselves to justice although they were not considered to be “political” entities like the FARC. The principal such organization, the AUC—the United Autonomous Forces of Colombia—did in fact dissolve itself. However, various drug cartels, while they had been hit hard by Colombian security forces with U.S. assistance, reorganized themselves and drug activity and related violence have not ebbed.

The ELN, the second largest Marxist guerrilla force, and the government engaged in their own peace talks, and while a temporary ceasefire briefly held, after three months the ELN abandoned it, returning to attacks, especially on a crucial oil pipeline. While talks continued under Santos’ more conservative successor, Ivan Duque, they broke down after an ELN attack left twenty-two police cadets dead.

Duque also was generally viewed as unsupportive of the peace agreement with the FARC which he had promised to modify during his campaign; in office he pressed the military to take aggressive action against FARC dissidents while his implementation of the agreement, particularly the land titling and rural development aspects, was criticized as slow and partial. His government asserted that in fact significant progress had been made, given limited resources and the coronavirus pandemic’s impact.

Talking to the ELN, Sidelining the Military

Petro seeks to give the peace process new impetus; his “total peace” program enjoys majority support amongst the public and he has forged a coalition in Congress which for now is supportive. He has gained passage of a major tax increase to help pay for further implementation of the agreement as well as for a general upgrade in social services. Negotiations with the ELN have begun in Venezuela with Cuba and Norway as “guarantors.”

But he has undertaken some policy shifts which may weigh against a successful outcome. Unlike in the negotiations with the FARC, the armed forces are not included in the government’s negotiating team. (It must, however, be recognized that Petro has included in his team a retired admiral and the head of the extremely conservative Colombian Cattlemen’s Federation.)

The absence of serving military officers may be due to the mutual suspicion between the armed forces and Petro, who despite his lengthy career in electoral politics, including service as mayor of Bogotá, is well remembered for his past in the M-19, a now-defunct urban guerrilla movement which was active in the 1980s. Also, during the presidential campaign Petro and the now-retired commander of the army had engaged in mutual public accusations of corruption.

And dramatically Petro forced into retirement twenty-three general officers, in effect purging some of the most experienced guerrilla fighters. Petro has said he sees the army converting itself into an “army of peace,” guaranteeing security in a generally conflict-free environment, presumably with a lower budget.

These decisions are problematic on various levels. Freezing out the security forces deprives the government of needed expertise at the negotiating table, and also means that if they view any final agreement as unsatisfactory, military leaders will likely find ways to make their lack of enthusiasm known to the public even as they remain formally subordinated to civil authority.

Also, if the negotiations with the FARC are a precedent, the government will need to have the capability to both talk and fight at the same time. A smaller security force, especially if the signs it receives from the government are that it should not fight too hard, is likely to hinder rather than help secure and maintain peace, as guerrillas and drug traffickers move back into territories which had been reclaimed for the state. And what if partial, rather than total, peace is attained—if, for example, a peace agreement is reached with ELN but not with the FARC breakaway groups or the drug trafficking organizations? Will the security forces be in a position to maintain operations against still active violent elements?

Just Saying No to the War on Drugs

Petro and his team have insisted that the existing approach to dealing with narcotics has been a failure and contemplate major changes, even to the point of decriminalization. Presumably, this means that, given that aerial eradication of coca fields has been banned by Colombia’s courts, that manual eradication, which requires the presence of security forces, would also stop, as would efforts to arrest and extradite the leaders of drug trafficking organizations with which he hopes to negotiate. Thus far, he has not completely ruled out manual eradication and extradition, but the logic of his “total peace” initiative implies an end to much of existing counternarcotics efforts.

The Biden administration has thus far avoided a confrontation with Petro over the seeming unwinding of longstanding efforts against cocaine production and trafficking. But while there is ample room for debate over drug policy, the reality which Petro does not seem to confront is that the United States (and other countries) is nowhere near legalizing cocaine, in contrast to the evident shift which has taken place regarding marijuana. We are unlikely to see cocaine dispensaries any time soon.

Thus, demand for illegal cocaine is likely to continue even if Petro is able to entice the various drug trafficking organizations into dismantling their operations in exchange for judicial leniency. (Exactly what the terms would be and whether there will in fact be any negotiations with the drug traffickers parallel to that with the ELN remains to be seen.)

And given the existence of such demand, it seems inevitable that any drug trafficking organizations which disappear would be promptly replaced by other ones eager to reap the foregone profits and maintain the needed capacity for violence, just as was the case when the AUC was disbanded. This would, presumably, be taking place even as the army’s capability to resist them would have been reduced.