How Russia Plans to Navigate Through a Post-Virus World 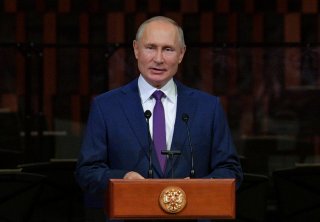 Experienced chess players can calculate positions on the board seven, ten, and even more moves ahead. It certainly takes time and practice to develop such a skill. Yet even the most talented player still faces a problem: you do not know how the opponent would respond. Assessing various probabilities of the opponent’s moves and then picking the best options for answers is a daunting task.

Foreign policy is not a game, but the chess analogy works here well: despite the uncertainty of unknown factors and sudden changes, most foreign governments tend to act rather predictably based on a certain “policy climate”—that is, most accepted views embraced by decisionmakers and their advisers. Can we predict Russia’s behavior judging the current policy climate in Moscow?

This is almost a sure bet that no matter which administration occupies the White House after January 2021 would have to anticipate little change in Russian domestic politics at that time and in the foreseeable future. No new influential political group or popular movement would challenge the existing political climate related to foreign policy and there will be no swift changes in Russia’s strategic vision of the world. What are the key components of this vision?

First, Moscow elites continue to believe that the Western political system has been in decline and this descent is only deepening now. The global financial crisis of 2008, the following long economic slowdown, the Euro crisis of 2015, Brexit, and the economic and political consequences of the 2020 pandemic—all these are used by Russian commentators as the evidence that the West is losing its dominant position in the world economy and finances.

A majority Russian business, political, and intellectual elites today are apparently comfortable with a model of state capitalism that has already been established in their country. In this model, the free market is accepted, yet the central government makes interventions any time and any way it wishes—all for the sake of the stability of the system. Professor Sergey Karaganov, a leading specialist at the Higher School of Economics in Moscow, openly declares that the state authoritarian model of capitalism is certainly more effective than the liberal democratic one. Although some experts like Alexander Vorobyov of the Russian Academy of Sciences warn that the belief in the superiority of state capitalism simply echoes the position of their Chinese counterparts, few in Russia today have concerns about China’s models dominating Russian economy and finances in the future. On the contrary, most in Russia look forward to the mutual economic, military, and cultural cooperation of both countries. China has already become a major economic and political partner of Moscow and both sides have agreed on a “strategic partnership.”

Next, there is a widespread expectation in Russia that the confrontation between the United States and China will be a major theme in international politics. The world is likely to come out of the pandemic crisis with significant losses in most social and economic areas. However, the emerging gap between the two leading economies—the United States and China—on the one hand, and all others, on the other, should noticeably increase. These will be a different “cold war.” If during the Cold War the arms race was a major point of contention, then now the new playing fields will be the economy and cyberspace. Ideology will play a role, too. It will mostly be a dilemma about which economic and political model will win the hearts and minds globally: the Chinese model or the American one. The preferences of most Russian experts are with the former.

Russian-American relations are unlikely to change for the better any time soon either. Russian commentators believe that the United States is going through a serious domestic crisis, from which it will emerge seriously weakened. Some even see that the very foundation of the U.S. government and its political institutions is under threat, which is something that Americans won’t be able to address. According to Dmitry Evstafiev, a professor at the Higher School of Economics, Americans, unlike Russians, do not have a certain cultural and spiritual “core” or stamina—rooted in the experiences of World War II—to overcome crises of such magnitude.

America, in the eyes of Russian commentators, not Russia, does not want to improve its relationship with the Eurasian country. Two reasons exist for this. First, there has been a decades-long American strategy, inherited from the Cold War, to “keep Russia down” by all means. Brought up in the atmosphere of Russophobia, several generations of “hawks” in the American government keep a carte blanche to do anything to hurt Russia and its people. The second reason is political and pleases both ends of the political spectrum in Washington. The American Right, in Moscow’s view, has a visceral negative reaction to Russia’s growing competitiveness and assertiveness. The Left, on the other hand, is obsessed with Moscow’s dismal human-rights record. As a result, showing “softness” toward Russia is a liability for any politician in America’s current political climate. Moreover, as far as the argument goes, the Trump administration—long before the pandemic and the riots in several American cities—was using Russia as the default “bogeyman” to distract the public from domestic problems. Many news outlets and experts on Russia share the blame for spreading the anti-Russian mantra, which is as ill-informed as it is ideologically biased toward anything Russian.

It is clear, based on what is being reported, that Moscow’s elites believe that little will change in Washington after the presidential elections in November. Fyodor Lukyanov, editor-in-chief of Russia in Global Affairs urges Russia to move away from the U.S.-focused foreign policy. Still, it appears that for weeks the overall tone of comments tended to be more supportive of Trump. Although Trump has been a preferred choice among most experts in Russia, Natalia Tsvetkova, a professor at Saint Petersburg State University, predicts that even if Trump remains in power, his support in Russia should drop due to the fact that there have been no positive changes in U.S.-Russia relations. On the other hand, Moscow is concerned that Joe Biden will likely support a new round of tough sanctions against Russia, which Oleg Deripaska, one of the Russian oligarchs has already predicted to be the “sanctions from hell.” There is an expectation that if Biden is elected, then he would do next to nothing to change the toxic legacy of Trump’s foreign policy. Biden’s foreign policy team still remembers the humiliation it suffered following its unsuccessful attempt at “resetting” U.S.-Russian relations under the Obama administration.

Russian leaders would like to continue negotiations with Washington on arms control and the extension of The Strategic Arms Reduction Treaty. At the same time, they are not ready to do any serious concessions. Some commentators consider that Trump’s attempts to meet with Putin this fall will pursue the publicity goal only. Others suggest that any negotiations will make sense only after the elections in November.

The anti-Western sentiment of public opinion that was noticeable in 2014-16—sparked by the negative reaction of the West to Russia’s actions in Ukraine—has been gradually declining. Many people, especially outside Moscow, are tired of confrontation with the West. At the same time, there is a stable and strong belief in Russian establishment and society that cooperation with the United States is unlikely to benefit Russia. Maksim Sokolov from the Novosti Agency, a media network, summarized an opinion of the majority that under any presidential administration Washington would continue its attempts to weaken Russia’s economy so that Russia has no choice but to pivot closer to Iran and China. This is not desirable, “but we have no choice,” concludes Sokolov.

Russian leaders continue to believe their country belongs to the global decisionmaking club and relentlessly backs the idea of a new “concert” of great powers. Moscow desires a stable role in global summits, conflict settlements, and global institutions. At the same time, Russians see the need for them to fill the vacuum created by American inaction or withdrawal from some regions, such as in the Middle East. Russian politicians hope that America’s isolationism under Trump (or an expected “soft” approach under Biden), should contribute to Russia’s growing prestige as a global power under Putin’s leadership. Russia will continue resisting the existing world order; Moscow will attempt to lead. According to pro-Kremlin expert Sergey Kurginyan, it is Russia that will lead the way “out of the deadlock.” It will pursue new alliances with countries—regardless of their political systems—that agree with Russia’s foreign policy, with its strategic goals, and that support their implementation. In the future, Russia will seek to expand partnership in Asia, the Middle East, Latin America, and in the Pacific region.

Russian politicians still consider the post-Soviet space as the sphere of their interest and influence. Any political instability in those regions are viewed as a threat to Russia. That is why, according to Evgeny Treshchenkov at Saint Petersburg State University, the political crisis in Belarus may cause another “hot spot” in Europe.

A careful look at the chessboard shows the positions of both sides. Although all the future moves are impossible to predict, a few such moves are expected. It is almost a consensus in Russia that in the immediate post-pandemic world, nobody should expect any improvement in relations between the United States and Russia. The chess game continues.