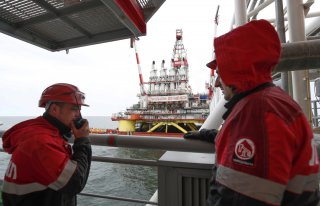 Congress is preparing to impose severe punitive sanctions on a range of European companies involved in the still-unfinished Nord Stream 2 gas pipeline between Russia and Germany. The sanctions are contained in both the Senate and House versions of the National Defense Authorization Act and will become law when Congress approves the NDAA.

These new sanctions have provoked a firestorm of criticism in Germany and even the threat of counter-sanctions by some legislators in Berlin. In part, the reaction reflects a perception of American hypocrisy because this year the United States has become the world’s biggest importer of Russian crude oil for other than transit, buying more than twelve percent of Moscow’s crude exports.

According to the United States Energy Information Administration, in the first half of this year, this country imported sixty-eight million barrels or 9.3 million tons of Russian crude, the largest amount in at least sixteen years. This places the United States between the Netherlands and Malta as the second-largest importer of Russian oil overall, but those two countries import mostly for transit. America imports to refine and use, and hence it is number one among Russia’s foreign oil users.

The reason is that a number of refineries on the Gulf Coast of Texas and Louisiana have catalytic cracking units designed to process the very heavy and high-sulfur crude produced in Venezuela, which we currently do not allow in as part of our sanctions on the regime in Caracas. For technical reasons, these refineries cannot process the lighter and lower-sulfur crude typically produced through hydraulic fracking in this country. For reasons of price and transport, the refineries chose to buy Russian heavy crude as a substitute, without much consideration for the broader context of Russian-American relations, let alone for the range of legislated U.S. sanctions on the regime in Moscow.

Make no mistake: this is not a small beer. This is big money in the Kremlin’s coffers.

It is certainly no secret that the trans-Atlantic relationship is undergoing a period of considerable tension, especially in U.S. relations with Germany. Today, German and U.S. political elites, including the Congress and the Bundestag, no longer enjoy the deep and often personal ties which linked our two countries during the Cold War. All too often, there is simply a dialogue of the deaf between Washington and Berlin, exacerbated by the German commitment—shared across the political spectrum—to maintain a cooperative working relationship with Moscow. The pending new sanctions on Nord Stream 2 aimed at German firms and individuals rather than at Russian equivalents tend to aggravate a German sense of victimization by Washington. It is no coincidence that the most pro-Russian and anti-American sentiments on Nord Stream 2 come from the far-Left and far-Right of the Bundestag, in part because those parties are overrepresented in the former East Germany where the pipeline is due to enter German territory and create local jobs and prosperity.

Now, the Germans see supertankers carrying Russian crude oil to Texas and Louisiana while U.S. legislators exercise their sanctions muscle to prevent the completion of a gas pipeline which the government of Chancellor Angela Merkel and most of her country’s political leadership (including major labor unions, banks and corporations) regard as almost essential to the energy-intensive German export economy. They do not regard American (or other) liquified natural gas as an adequate alternative. Indeed, there is not yet a single operational LNG import terminal in Germany. The German leadership thinks it has assured Ukrainian gas transit for several years to come and that only massive piped gas (not only from Russia) can meet Germany’s post-nuclear and post-coal energy needs.

The trans-Atlantic alliance is certainly in need of a serious change so that Europeans take on their own security burden carried for generations by Americans. Still, America does not need another source of tensions with its European allies at this time, and above all with Germany. If the United States wishes to lead by example rather than by bullying, then the solution to the Russian hydrocarbon issue is obvious: Congress should adopt legislation applicable to U.S. firms similar to that it imposes on Europeans and impose retroactive financial sanctions on the companies which are bringing millions of tons of Russian crude oil to America. Then, Congress can look across the Atlantic without shame.

E. Wayne Merry is a senior fellow for Europe and Eurasia at the American Foreign Policy Council, Washington, DC.