How to Solve the Humanitarian Crisis in Donbas 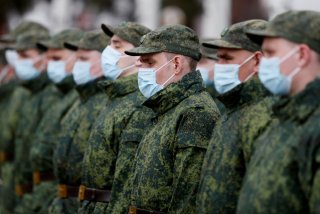 The world is paying attention to Ukraine again, but for the wrong reasons. Russia, which recently amassed more than 100,000 troops in and near Ukraine, is indicating that it intends to draw them down. But Vladimir Putin has deployed the largest number of troops on Ukraine’s border since 2014, the year in which Moscow gobbled up Crimea and invaded eastern Ukraine. In addition, Russia blocked flight access above Crimea for several days and closed parts of the Black Sea for military drills. Nor is this all. Moscow is blockading the Azov Sea until October and some analysts worry that a far-fetched assassination plot in Belarus might presage a Russian military build-up in Belarus.

For now, Putin is unlikely to launch a full-scale invasion in Ukraine. The costs still outweigh any benefits. Many reasons restrain the Russian president, but chiefly among them are time and body bags. If Putin bides his time until the fall when German Chancellor Angela Merkel steps down, her replacement may be inclined to give on EU sanctions on Russia. (Germany has been key to keeping EU sanctions together.) What’s more, Moscow can take a city or two on Ukraine’s Black Sea coast, not to mention the water canal north of Crimea with relative ease. Holding them will be another matter. Ukraine’s armed forces have significantly improved since their ragtag days of 2014 and there would be a real fight—and numerous Russian casualties—to retain any fresh gains.

Lost in the shuffle are those who stand to lose the most and continue to be exploited as geopolitical pawns. The conflict in Ukraine’s east is not only a security concern but also a humanitarian disaster. The Kremlin has long trapped civilians in eastern Ukraine in desperate circumstances. Yet the latest escalation from Russia showed the Kremlin feigning concern for the civilian population it has immiserated. As warnings emanate from Moscow about defending Russian citizens in the Donbas, it is essential to remember that the Kremlin itself has created the very humanitarian crisis it now seeks to exploit.

The needs are immense in the occupied territories and in the grey zone near the contact line on the Ukrainian side. The global pandemic essentially halted crossings between Ukraine and the non-government-controlled part of Ukraine. From March 2020 to March 2021, the United Nations found a 97 percent drop in the number of people crossing the contact line as a result of measures to contain the pandemic. The precipitous drop is a big deal because most people going back and forth are going to collect pensions, which means that those stuck in the non-government-controlled areas of Ukraine are even worse off. And those who live in Ukraine’s non-government-controlled areas—the carved-up sections of Luhansk and Donetsk oblast​s occupied by Russian and Russian proxy forces—were desperately poor before the pandemic. Before Covid​-19 struck, approximately 56 percent of families depended on pensions as their main source of income. Provision of social services was essential even before the pandemic and the latest round of hostilities. Now, the already struggling population faces a double whammy of increased dependence on humanitarian aid while the delivery of such essential services simultaneously decreases.

Assistance must be targeted to those living along both sides of the contact line. Since fighting began in 2014, those closest to the contact line face hellish circumstances. Access to clean water, food, shelter, health care, and education is never guaranteed. The United Nations estimates that 1.5 million people in Ukraine’s east require assistance in 2021, which is more than a 50 percent increase from 2020. This includes access to the most basic needs of food and clean water.

As the world contemplates how to convince Putin to stand down, it should also pull out its collective purse and do something to make a tangible difference in the lives of those left behind. With the world’s focus again on Ukraine, let this be a reminder that the people on the ground in Ukraine’s east must not be forgotten. When the gunfire quiets down and the news turns to the next global crisis, aid will still be needed. Landmines will still be littered about. Critical infrastructure will still need repairs.

The United Nations says that it requires $168 million to help 1.9 million people in Ukraine’s Donbas. So far, the aid organization has received only 5.5 percent. Let’s change that.

Melinda Haring is the deputy director of the Eurasia Center at the Atlantic Council and a board member of the Right to Protection in Kyiv, Ukraine.

Shelby Magid is the associate director of the Atlantic Council’s Eurasia Center.