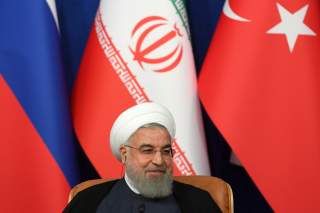 The Anglo-American “special relationship” might be at a low ebb, but events in the Persian Gulf have forced the British and U.S. governments to put aside their differences and cooperate against a common threat: Iran. For no matter how unpopular President Donald Trump might be in Britain—the Sir Kim Darroch affair and Trump’s racist attacks on four Democratic congresswomen each drew stinging rebukes from British politicians—Tehran’s seizure of a British-flagged tanker ensures that, at least for the time being, the relationship between the United States and Britain can revert to autopilot, which means collaborating to keep the Strait of Hormuz free from Iranian predations.

Yet while the Trump administration can surely count on the British to help with the immediate political and military challenge of deterring Iran’s naval forces, the present crisis will only bring Britain and America closer together in the short term. Going forward, Trump’s role in escalating tensions with Iran will almost certainly push London (and other allied capitals) to view the United States as an ever more untrustworthy keeper of the international rulebook, jeopardizing support for U.S. global leadership and weakening key security relationships.

After all, it is no secret that many foreign leaders—including in London—place the blame for worsened relations with Iran squarely at the feet of Trump. While America’s adversaries castigate the United States out loud, its allies prefer to do so in private. But none in the international community will look kindly upon the Trump administration if the simmering antagonism that currently characterizes the security situation in the Persian Gulf is allowed to boil over into a devastating regional war.

Like America’s other European allies, Britain has pressed the Trump administration to return to the negotiating table over Iran’s supposed nuclear ambitions. But instead, the tit-for-tat between Washington and Tehran has grown increasingly dangerous on Trump’s watch. This has been the case at least since May 2018, when the president announced that he intended to withdraw from the multilateral deal meant to contain Iran’s nuclear ambitions, known as the Joint Comprehensive Plan of Action (JCPOA).

Over the past year, the United States has piled on economic sanctions against Iran, ostensibly as punishment for the regime’s pursuit of a nuclear weapons capability and its support for militant groups in Yemen, Iraq, and Syria. Much to the exasperation of America’s allies, the Trump administration has insisted that others join in with this policy of economic coercion, even as the other parties to the JCPOA have scrambled to keep diplomacy alive.

Of course, Tehran continues to give hawks in the United States no shortage of fodder. Iranian forces are involved in several of the region’s bloodiest conflicts, uniformly working at odds with U.S. interests. Iranian-backed Houthi rebels in Yemen routinely take potshots at U.S. drones and, on June 20, Iran’s own forces successfully downed an American drone over the Strait of Hormuz. Just one week earlier, the crews of two commercial oil tankers were forced to abandon ship after coming under attack in the Gulf of Oman. While Tehran denies responsibility for assaulting the vessels, U.S. naval officials are unequivocal that Iranian military explosives were involved.

Iran’s seizure of the British-flagged Stena Impero is the latest attempt by Tehran to internationalize its dispute with Washington. Although egregious, this act of aggression was not altogether surprising. In April, the head of Iran’s naval forces made clear that other nations’ vessels should not expect safe passage through the Strait of Hormuz so long as the waterway was effectively closed to Iranian goods as a result of the crushing U.S. sanctions. “We will close it,” he said.

It makes sense for Iran to flex its muscles in the Persian Gulf. Asserting dominance over “the world’s most important chokepoint” is a way to remind the international community that all nations have a stake in the future of U.S.-Iranian relations. If Britain and others want commercial shipping to move freely between the Persian Gulf and Arabian Sea, then they should use their influence over Washington to bring about a reduction in tensions. From the Iranian perspective, any government that tolerates Trump’s hostile approach to Iran is not an innocent third-party bystander but an active participant in the strangulation of the Iranian economy.

For Iran, there is also the added benefit that Britain is an easy target. Not only do the two powers have a long history of animosity toward one another, but Tehran can claim that its seizure of the Stena Impero was retaliation for the Royal Navy’s ongoing detention of an Iranian vessel in Gibraltar. And while London has broadly supported the JCPOA since its inception in 2015, Britain’s outgoing Prime Minister Theresa May toed a hardline on Iran during her time in office, making no secret of her desire to bolster economic and security ties with Iran’s adversaries in the Gulf Cooperation Council.

Either way, Britain is now a central player in the Gulf crisis. What comes next?

In the short-term, it is worth emphasizing that the risk of war remains high. To be sure, Trump was right to call off airstrikes against Iran last month, and moves such as downing an Iranian drone and ordering a new wave of cyberattacks stop far short of using lethal force. But when missiles are flying, airstrikes are being mooted, allies’ tankers are being boarded, more U.S. troops are being sent to the Gulf region, and committed hawks retain key positions inside the administration—the risk of a conflagration cannot easily be dismissed.

Paradoxically, drawing Britain into the crisis might well be an Iranian strategy of avoiding war with the United States. Tehran knows that Britain is far less amenable to a conflict in the Persian Gulf than, say, U.S. officials like John Bolton; unlike Trump, the British government has a recent history of resolving its disputes with Iran through jaw-jaw, not war-war. It is therefore possible that Iran is banking on London to push for a diplomatic solution to what is now a multilateral dispute. It is also possible that other countries might be encouraged to weigh in on the side of peace if they believe that their own commercial interests are now in jeopardy.

But Iranian officials are mistaken if they believe that doves in London or any other foreign capital have the power to restrain the hawks in Washington. The only person capable of tempering U.S. policy in the Persian Gulf is the president himself—a man who, unfortunately, delights in displays of American military power but who nevertheless seems reluctant to begin a costly new war in the Middle East. There are at least some signs that Trump is open to back-channel communications with Tehran, offering a glimmer of hope for a diplomatic breakthrough.

In the long-term, Iran’s capture of the Stena Impero will do little to alter its reputation as a pariah state. But nor will the United States emerge from the crisis covered in glory. More likely than not, the entire affair will exacerbate the frustration of the British and others frustration with Trump’s pattern of trashing international agreements and saddling allied nations with the bill. What reason does Britain have to remain in lockstep with the United States once the current exigency has passed?

Already, Labour’s Jeremy Corbyn has blamed Iran’s bellicosity on Trump and urged restraint on “both sides.” One of his colleagues has warned that Britain should distance itself from America’s march to war in the Persian Gulf. Such views are privately held by those on the right wing of British politics, too, but Labour’s willingness to trumpet them as campaign slogans only fuels the polarization of opinion on the so-called “special relationship.”

This is exactly the scenario that erstwhile doves in the Trump administration had been striving to avoid: close U.S. allies concluding that America lacks the willingness or capacity to solve pressing global issues. Both Rex Tillerson and James Mattis, for example, supported U.S. participation in the JCPOA because they believed that American support for multilateral institutions was important for reassuring international stakeholders that Washington could be relied upon as a faithful steward of world order and a protector of international security. On this point, at least, they were right.

And so, while the United States, Britain, and other allied nations will undoubtedly put on a show of unity in the face of Iranian aggression, the bigger picture is that none of America’s allies—at least not those in Europe—want to be embroiled in a standoff with Tehran. The JCPOA was supposed to pave the way to an all-round improvement in regional security. Now, a lasting settlement looks like a distant prospect at best. British and European leaders warned that this would happen. Their counsel was rebuffed. When it is all over, they will have every right to be resentful.