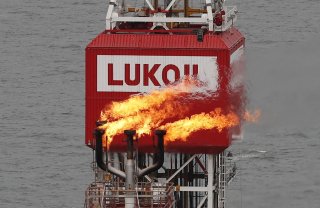 Mounting evidence of Russian war crimes against Ukrainian civilians has spurred calls for sanctions against Russian energy exports, from which Bloomberg projects Russia will earn $321 billion this year—more than a one-third increase from 2021. While many in the West are understandably wary of roiling oil markets, there is a way for Washington and its allies to structure oil sanctions to minimize supply loss and price increases while inflicting financial pain on Moscow.

Rather than taking Russian barrels off the market, Western sanctions should aim to leave Russian supply intact while using so-called “secondary” sanctions to reduce Russia’s access to oil export revenues and offset the benefit to Moscow of higher oil prices. This sanctions regime should draw on lessons learned from the multilateral sanctions against Iran in 2011-2015, which enjoyed bipartisan support and helped force Tehran into nuclear negotiations. With some tailoring to current market realities, these kinds of sanctions can limit costs to American and allied consumers.

Western sanctions imposed since the war began have rocked the Russian economy. As Russia’s own foreign minister has admitted, the scale of the West’s economic response caught the Kremlin off-guard. Russian officials have reportedly concluded that the country’s economy can hold out for several months but then all bets are off unless sanctions are eased. Unfortunately, Ukraine can’t afford to wait that long. As one senior Ukrainian officer recently put it, Kyiv is “calculating time not in weeks or days—but in lives.”

Now is the time for the West to press on the gas and force President Vladimir Putin to end the war as quickly as possible. In addition to providing Ukraine with weapons and other support, the West should target Russia’s vital oil export revenue, which accounted for almost 37 percent of Russia’s total exports in 2021. Hard currency earned from oil exports is especially crucial for Russia following Western sanctions that have frozen much of Moscow’s foreign reserves.

Although the United States, United Kingdom, Canada, and Australia have banned or restricted imports of Russian oil, they account for only a small percentage of Russian oil sales. Most major importers, including the European Union and China, which respectively buy about half and one-third of Russia’s oil exports, have not prohibited such purchases even while major banks, oil and shipping companies, and trading houses are eschewing Russian business. Likewise, while India has been scooping up heavily discounted Russian oil, Chinese state refiners are reportedly shunning new Russian oil trades, fearing Western backlash if China appears to be aiding Russia’s war effort.

Former officials from both the Trump and the Obama administrations have advocated “secondary” sanctions against Russia’s energy sector that target non-U.S. individuals and entities for engaging in activities with those targeted by U.S. sanctions. First introduced against Iran in 2011, these sanctions targeted banks that importers used to pay for Iranian oil. Any foreign firm caught conducting transactions with those financial institutions could face U.S. penalties, including banishment from the U.S. market and financial system. For almost any major foreign company, that would spell a death sentence.

Washington also incentivized importers to gradually decrease both the volume and price of their Iranian oil purchases by providing sanctions exemptions for the banks of any country that significantly reduced imports of Iranian oil. More importantly, U.S. sanctions prevented Tehran from repatriating hard currency earned from oil sales, requiring those that purchased Iranian oil to hold its funds in “escrow accounts,” denominated in local currency that Iran could use only to purchase trade goods in that currency. In so doing, Washington incentivized sanctions compliance by Iran’s oil customers, who would naturally rather see Iranian oil proceeds spent in their own economies rather than sent back to Iran.

While borrowing from its experience with Iran, Washington will need to adapt its strategy to the current context. Whereas Iran was the world’s fifth-largest oil producer in 2012, today Russia is the world’s third-largest oil producer and top oil exporter. U.S. shale production cannot blunt the rise in oil prices to the same extent it did a decade ago. Already-high oil prices and severe inflation further complicate matters. Any sanctions against Russian oil exports will need to be carefully tailored to minimize disruptions to global energy markets and create incentives for sanctions compliance by third parties.

Therefore, a phased suppression of Russian oil revenue is necessary. Western sanctions should focus not on taking Russian supplies off the market, but on markedly reducing the revenue Russia earns from each barrel of exported oil. The United States and its allies could group importers of Russian oil into three categories: countries that have stopped or plan to stop purchasing Russian oil; those that have committed to phasing out their oil purchases in a way that does not short the oil market; and big importers, such as China, India, and some European countries, that have not committed to any reduction in oil purchases from Russia.

Washington and its allies should focus on the third category, insisting that those countries refrain from increasing oil imports from Russia. In return, Western sanctions could require those buyers to realize a specified discount on Russian oil purchases during an allotted timeframe. For example, using the Brent crude benchmark, India would be expected to buy a barrel of Urals oil for a discount of Brent minus $35 to $50 for the next ninety days, with the discount increasing by an additional $15 to $25 with each ninety-day interval by Russian sellers. Such an arrangement could benefit remaining Russian oil customers while keeping the price of oil down globally for those that have ceased purchasing Russian crude. Buyers that significantly increase Russian oil purchases or do not realize a discount could face Western sanctions or other restrictive measures.

Concurrently, the sanctions regime should employ a phased-in special purpose account mechanism akin to that used for Iran. This would prevent the repatriation of hard currency to Russia while permitting trade in consumer goods and benefiting the jurisdictions holding the accounts, as with Iran before 2015. A per-barrel percentage of Russian oil export proceeds would be placed in special purpose accounts, locked away until Russian troops withdraw from Ukraine. That percentage should increase over time, perhaps starting with 40 percent during the first ninety day period and increasing to 60 percent during the next one.

The Biden administration could also task the U.S. Energy Department’s Energy Information Agency with certifying that the application of U.S. sanctions in this regard will not cause a recession. Washington developed a similar mechanism in the Iran context to ensure that global oil producers had enough excess capacity to prevent an economic downturn even with Iranian oil off the market.

Moscow would surely protest, perhaps threatening retaliation in the energy sector or through other means, such as cyberattacks. Washington and its allies should certainly prepare for that possibility. Ultimately, however, given Russia’s reliance on oil revenue and the perilous state of its economy, Russia would have a powerful incentive to continue selling oil so long as its producers are turning at least some profit. Halting exports would also do lasting damage to shuttered Russian oil fields. Although Beijing will no doubt condemn the sanctions, it would probably push Russia to maintain full export levels, fearing that higher energy prices and the resultant global economic slowdown could hurt China’s economy.

To make this plan work, the Biden administration will need to work closely with Congress and America’s allies. Broad buy-in will be crucial to ensure these sanctions don’t inadvertently aid Moscow by sowing intra-alliance divisions and undermining the current strong support for sanctions against Russia. The Biden administration should also encourage American oil production, reversing policies that have dampened domestic production.

Any sanctions effort targeting Russia’s energy sector will be difficult and complex, but not impossible if the West can find the political will. The Ukrainian people are on the front line against authoritarian aggression, fighting to defend not only their homeland but also the fundamental values that underpin the free world. Will the West let them fight that battle alone?

Matthew Zweig is a senior fellow at the Foundation for Defense of Democracies (FDD), where John Hardie is research manager and a research analyst. Follow Matthew on Twitter @MatthewZweig1. FDD is a nonpartisan research institute focused on national security and foreign policy.