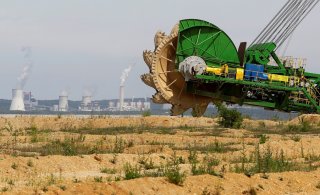 In Europe, every political consensus of the last few decades has been thrown out the window. German pacifism, French president Emmanuel Macron’s belief that NATO is “braindead,” and now the continent’s entire agriculture sustainability strategy have been put into question. In response to disruptions in Europe’s food supply, the European People’s Party (EPP), the European Parliament’s largest parliamentary group, is demanding that the “Farm to Fork” strategy be called off.

The European Commission’s “Farm to Fork” strategy seeks a 50 percent reduction in pesticides, devotes 25 percent of agricultural land use to organic farming, and reduces fertilizers by 20 percent. Although the plan was initially criticized by farming representatives and received political backlash due to a U.S. Department of Agriculture (USDA) study that showed a considerable reduction in agricultural output, the European Commission pressed on with the legislative process anyway. However, now that the war in Ukraine and sanctions on Russia have impacted Europe’s food supply, the USDA study, which found that agricultural prices would soar between 20 and 53 percent if the Farm to Fork strategy was implemented, is increasing concern among the European Union’s (EU) elected officials.

For example, EPP politicians such as Italy’s Herbert Dorfmann are arguing that the European Commission “should avoid presenting other legislative proposals that have negative impacts on European food security.” The fact that one of the EU’s strongest political parties wants to forget about the most significant agriculture reform effort in decades should raise questions about the Farm to Fork strategy. If a new food system is so vulnerable to geopolitical disruptions, doesn’t that pose a long-term challenge to Europe’s agricultural security? Echoing Dorfmann, Macron stated that “[The strategy’s] objectives must be reviewed because under no circumstances can Europe afford to produce less,” and he added that a “deep food crisis” could emerge in the upcoming months.

Ukraine’s agricultural output makes up 30 percent of the world’s wheat and barley trade, 17 percent of corn, and over half of sunflower oil and seeds, including 88 percent for Europe alone. Ukraine is also the EU’s main trading partner for non-GMO soybeans, which are used for animal feed, as well as 41 percent of rapeseed and 26 percent of honey. Prices for wheat and corn are already sky-rocketing in the wake of the war.

The EU will need to question its approach to sustainability and seriously consider ways to improve its food security in the coming months. Everything should be on the table, from a faster reevaluation of rules on genetic engineering to a moratorium on new farming regulations. The effects of geopolitical disruptions on global and domestic food systems should act as a cautionary tale for those who seek radical regulatory changes.

Many of the incoming policy shifts in Europe will depend on the outcome of the war in Ukraine. Ukrainian forces have put up more resistance than expected, defeating Russia’s multi-pronged military offensive in the early stages of the invasion. Additionally, at least for the foreseeable future, European sanctions on Russia will remain in place. Excluding Russia from the SWIFT payment system, barring its airlines from European airspace, and restricting trade flows will have significant effects on the Russian economy. However, Europe is also heavily reliant on Russian natural gas—a situation that has contributed to Germany’s passivity towards Russia in the past. This fact has not been lost on Russian officials. Dmitri Medvedev, the former president and current deputy chairman of the Security Council, tweeted in February, “German Chancellor Olaf Scholz has issued an order to halt the process of certifying the Nord Stream 2 gas pipeline. Well. Welcome to the brave new world where Europeans are very soon going to pay €2.000 for 1.000 cubic meters of natural gas!”

Europe is scrambling for alternatives, looking for allies and more trustworthy partners to supply energy. Azerbaijan has arisen as an alternative supplier thanks to the Trans-Adriatic Natural Gas Pipeline (TANAP) and Baku’s announcement that it intends to double its natural gas supplies. Europe is also looking to increase its use of liquified natural gas (LNG), as its existing infrastructure (one-quarter of which is located in Spain) only operated at 45 percent capacity in 2021. Canadian candidate for prime minister, Pierre Poilievre, has even made increasing Canada’s LNG exports to Europe a campaign issue. However, along with searching for outside alternatives, Europe needs to increase domestic production to make up for the loss of Russian gas imports in the event of a complete cut-off, a policy outcome that looks increasingly inevitable following U.S sanctions on Russian oil imports. Last week, for example, Lithuania decided to block all energy imports from Russia.

When asked by the German media, Minister for Economic Affairs Robert Habeck did not rule out halting the phase-out of Germany’s three remaining nuclear power plants and delaying the phase-out of coal use planned for 2030. In Italy, Prime Minister Mario Draghi is considering reopening shuttered coal plants. As Europe’s second-biggest coal producer, Poland is unlikely to face more vigorous calls to halt production.

The European Commission has also delayed releasing its energy strategy, which was initially supposed to be revealed on Wednesday. The document emphasizes increasing renewable energy production in Europe but also calls for more “blue hydrogen,” which is made from natural gas. It appears that given the crisis in Ukraine, European energy policy is going back to the drawing board.

Bill Wirtz is the senior policy analyst at the Consumer Choice Center, focusing on new technology, agriculture, trade, and lifestyle regulations. He recently published No Copy-paste: What not to Emulate from Europe’s Agriculture Regulations.