This Is How the U.S. Military Can Help the Police 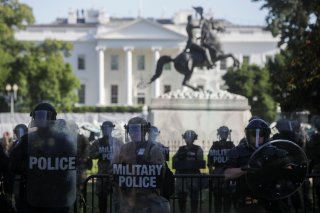 As both peaceful protests and riots roil the United States, the military finds itself embroiled in what role it should play. The scenes of low flying Army helicopters causing fear among protesters in streets of the nation’s capital, and National Guard troops supporting the removal of protesters from Lafayette Park in front of the White House, have sparked widespread concern that our country’s armed forces have been improperly used to suppress legitimate dissent.

Ironically, the origins of this state of affairs are not so much political as they are constitutional, going back to the founding of the Republic. When the thirteen colonies broke away from Great Britain, each had an armed militia to provide for local security and protection. At the Constitutional Convention, the Founding Fathers were divided into two camps on what should be done about militias. The federalists favored strong federal control while Jeffersonians opposed, fearing such central authority could leave states powerless to defend themselves against federal overreach. The end result was a compromise, providing for shared authority between states and the federal government over militias, a principle embodied in Article 1, Section 8, Clause 16 of the Constitution. Today, unless federalized by presidential order, state militias, or the National Guard as they are now known, are controlled by state governors. As commander in chief, a governor can order a National Guard to deal with natural disasters or civil unrest such as actions taken by many governors in the aftermath of George Floyd’s death in Minneapolis police custody.

The situation with Washington, DC, however, is constitutionally different as it is not a state and has no governor. The DC National Guard is the only one that reports solely to the president of the United States with no concurrent power-sharing with any state. The president delegated his authority to control the DC National Guard by Executive Order in 1949 to the Secretary of Defense. This likely helps explain why the current chairman of the Joint Chiefs of Staff was seen visiting DC National Guard troops on the day that Lafayette Park was cleared with the support in part of military police. It also likely helps explain why some media called out President Donald Trump for using “federal” troops to help deal with disturbances in Washington in the aftermath of Floyd’s death as those soldiers fell under the ultimate command of the president, not any governor.

Traditionally, Americans have been leery about having the military directly involved in the maintenance of civil order in the United States, preferring to see such action handled at the local level by state-controlled National Guards, “not the Pentagon” in Washington, DC. This principle is enshrined in the Posse Comitatus Act, and its implementing rules, barring the military (subject to certain exceptions) from using any personnel to enforce domestic policies. The Comitatus law was passed after Reconstruction, ironically by racist politicians who wanted to keep Union troops out of the South as they had been previously helping to protect the newly won civil rights of African-Americans. More recently, unhappy with steps taken by various state governors to cope with violence in the wake of the Floyd killing, the Trump threatened to activate and use federal troops⁠—under an exception to Posse Comitatus provided for by the Insurrection Act⁠—to suppress civil disorder. That threat was met with consternation in wide quarters. It offended the widely shared, traditional sense that America’s professional military should not be politicized and dragged into the middle of domestic controversies unless the very foundations of U.S. constitutional order are truly threatened.

In fact, fairly recent history shows that active-duty U.S. military troops can be used effectively and justly to deal with civil dissent and mob violence. One successful example of just such an intervention was in 1957 when President Dwight Eisenhower sent the 101st Airborne to Little Rock, Arkansas. Those federal Army troops were ordered to protect nine young African American students as they exercised their right to attend Central Rock High School in the face of opposition by angry mobs and an Arkansas governor who openly defied federal court orders desegregating the school. Every American can take pride today in the justice of that forceful action by the U.S. military and its commander-in-chief to enforce the Constitution and the rule of law.

The situation faced today, however, is radically different. There is no state defying a federal court order calling for the enforcement of the civil rights of any American citizen. Law enforcement and troops under the command of State governors have sought to maintain and restore order even as Americans exercise their constitutional rights of assembly and free speech. This is exactly how the system is supposed to work under the Constitution. Still, in fairness to the president and the military, the situation in Washington, DC is considerably more difficult because the federal government is directly responsible for maintaining civil order in the city. The security of The White House and federal institutions must be safeguarded, regardless of any discontent with any elected president. The professional military finds itself in a challenging situation in Washington. But there is nothing new here. From the “Red Summer” of 1919 to the Bonus Marchers of 1932 to Martin Luther King’s murder in 1968 to the events of the last weeks, history shows that unrest comes to Washington. For better or worse, deploying federal troops to address assemblies and disturbances in the nation’s capitol has and always will be a contingency the federal military must be prepared to address evenly and professionally.

After 9/11, the Pentagon stood up Northern Command, headquartered in Colorado Springs, Colorado, to protect the continental United States, and to provide support for nonmilitary authorities in the United States including the States. Congress is considering what measures can be taken legislatively to address the lessons learned from George Floyd’s tragic death in police custody. The experience and expertise of the professional military can contribute to this process to help minimize any future need to send federally controlled troops onto America’s streets. Military approaches could be shared with civilian law enforcement through the establishment of schools where the military can help to educate police leadership on best methods and discipline used by the military for handling volatile crowd situations. Given Northern Command’s mission to protect the homeland, it is the ideal organization, both to take more direct, oversight control of the DC National Guard, and to help build a new partnership with the States to help promote best practices.