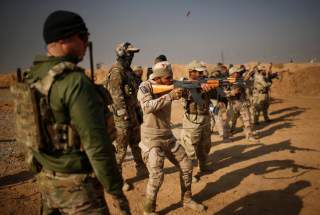 Imagine a military force that could prevail against America’s adversaries in great-power competition without going to war. As the specifics of “competition” with China and Russia continue to vex national leaders down to tactical military formations, new times call for new approaches to secure America’s national interests. United States Army special operations forces should be the force of choice to lead these efforts against adversaries that deliberately avoid America’s conventional strengths.

Despite the narrow focus on counterterrorism and counterinsurgency over the past eighteen years, Army special operations forces offer policymakers much more than expertise in “kicking doors.” They expand the range of military options to enable other instruments of statecraft to succeed.  This way, the United States does not have to resort to armed conflict—it wins without fighting. Army special operations forces do this by shaping adversary and partner behavior, both through behavior reinforcement—deterring adversaries and assuring partners, and behavior modification—compelling adversaries and inducing partner cooperation.

There is no shortage of literature extolling the virtues of special operations. Over the past few years many have proffered special operations forces as ideally suited for so-called gray-zone activities between peace and war due to their small-footprint, low-visibility, and politically sensitive nature. A new wave of scholars, practitioners, and think tanks continue to advance this discussion as the gray-zone debate evolves to one focused on competition below the level of armed conflict. Such competition is about proactively seeking positions of strategic advantage against an adversary, or as Sun Tzu would say, to “subdue the enemy without fighting.” Both China and Russia are aggressively advancing their interests through proxies, information warfare, and subversion, achieving war-like objectives without triggering a conventional military response from the United States and its allies.

This simple framework shows how the political use of Army special operations forces in competition today are based on two key aspects of the 2018 National Defense Strategy—coercion and partnerships. Furthermore, it asserts that influence is the critical element underpinning both. Working with and through foreign partners, Army special operations forces develop the understanding and relationships required to wield the influence necessary to shape behavior.

Why focus on Army special operations forces? Unlike other special operations forces that specialize in “direct action” raids such as the Navy SEALs, the Army’s Special Forces, Civil Affairs, and Psychological Operations units are specifically selected, trained, and organized to work with foreign partners.  They are experts in irregular warfare, which takes an indirect approach focused on influencing populations.

The Special Forces “horse soldiers” that rode beside the Northern Alliance to liberate Afghanistan represent a classic example of such partnered operations known as “unconventional warfare.” More recently, Civil Affairs teams are quietly assisting the stabilization of Syria as the Islamic State’s physical caliphate crumbles. These operations also demonstrate how Army special operations forces provide a critical Defense Department bridge to the Central Intelligence Agency, the Department of State, and the United States Agency for International Development, who often lack the capacity and/or access to accomplish their missions alone.

So what use are Army special operations forces against a peer state competitor? Their expertise in irregular warfare can be employed to manage the terms and tempo of competition. By integrating hard and soft aspects of power from coercion to attraction, they complement traditional forms of deterrence and coercive diplomacy in a compound approach that capitalizes on the full range of U.S. military capabilities.

In sum, the ability to influence relevant populations provides the United States leverage to attain strategic advantage. This political use of Army special operations can reinforce desired behavior (deterrence and assurance), or change undesired behavior (compellence and inducement), in adversaries and partners to advance U.S. interests. As the military refines concepts and plans to adapt to the evolving strategic environment, decisionmakers and soldiers alike should understand the utility and limitations of Army special operations in competition below the level of armed conflict.

(Adapted from Force Without War, which was coauthored by Barry Blechman and Stephen S Kaplan, and Joseph Nye’s The Future of Power.)

Coercion is the ability to influence an actor to do something that it doesn’t want to do. The National Defense Strategy discusses coercion repeatedly, emphasizing how revisionist powers have “increased efforts short of armed conflict by expanding coercion to new fronts” through predatory economic practices, propaganda, political subversion, and proxies. Coercion comes in two basic flavors: deterrence and compellence. Deterrence reinforces existing behavior by preventing a target from taking undesirable actions, while compellence seeks to modify a target’s behavior. Army special operations forces expand strategic options to achieve both through unconventional methods.

Traditional deterrence, backed by large conventional formations and nuclear weapons, relies on the power to hurt an adversary by applying overwhelming force if it crosses a red line for retaliation. Russia’s New Generation Warfare and China’s Unrestricted Warfare present challenges to traditional deterrence because they use “salami tactics” that avoid triggers for conventional retaliation (e.g., Crimea annexation and South China Sea militarization). Advancements in anti-access/area denial capabilities further constrain conventional options to punish the aggressor and reduce the deterrent effect of these options.

Deterring gray-zone coercion requires an unconventional approach, one that addresses the vulnerabilities that the adversary exploits in the target population, as well as augmenting capabilities that will nullify the aggressor’s advantages. For example, under the guise of protecting “compatriots,” Russia uses susceptible populations as proxies to justify humanitarian intervention and then maintain “frozen conflicts” to expand its regional influence. Psychological warfare and support to resistance movements—the raison d'être of the bulk of Army special operations forces—complement activities traditionally associated with “setting the theater,” enabling both deterrence and the transition to armed conflict if necessary. This unconventional deterrence works along the same underlying logic as its conventional counterparts—by denial and by punishment.

By building societal resilience and resistance capacity, Army special operations forces and partners signal to an adversary that the target of aggression would be too difficult, or costly, to take and hold. This functions through cognitive access denial—psychologically hardening susceptible populations to influence operations, and by offering a “bitter pill”—support to partner nation resistance activities to expel an occupying power.  These activities signal the costs of aggression without requiring a significant conventional military footprint. In cost comparison—$1.875 billion for a conventional rotational presence (armor and aviation units) versus $55.8 million for special operations partnerships to build capacity—Army special operations forces play a critical, cost-effective role in deterrence.

Preventing future adversary coercion may not be enough to improve America’s strategic advantage, as it only preserves the status quo of eroding U.S. power. Army special operations can instead influence an adversary to cease aggression or subversion through the threat of unorthodox punishment or use of limited force. Conventional military activities such as freedom of navigation operations have yet to decisively check China’s creeping militarization or roll back its gains. Compelling gray-zone behavior change requires new ways to raise the costs of adversarial conduct and affect their decision calculus.

Similar to unconventional deterrence activities, Army special operations forces can impose costs directly through supporting resistance activities that undermine sources of adversarial material power. Alternatively, they can impose costs indirectly through cognitive activities that shape and amplify local grievances to effect popular mobilization and legal action against adversarial interests. For example, frustration continues to mount with Chinese investments in Africa, offering the potential to capitalize on disillusionment with China’s “One Belt, One Road” initiatives. China also characterizes Taiwan, Tibetan, and Turkistan separatists as significant threats to their national security. While a single action may not cause a noticeable effect, multiple compellence activities sequenced over time and across the globe offer new ways to influence adversarial decisions.

These unconventional compellence activities can also facilitate escalation management during a crisis by providing options to operate through a geographic and/or cross-domain offset to avoid direct confrontation. While launching Tomahawk Land Attack Missiles may be an inappropriate (and ineffective) punishment for election interference, surrogate networks developed by Army special operations forces that can hold adversary economic or military assets at risk, in Africa for example, may offer more flexible response options to alter the trajectory of emerging crises.

Choosing the optimal partners, and influencing them to align with U.S. objectives—this is the core of the dilemma that has beleaguered U.S. relationships with state and non-state partners alike in the war on terror. This “partners paradigm,” the reliance on actors that often hold interests and perspectives inimical to the United States, will continue to play a significant role in great-power competition as well. The reality is that potential partners will continue to balance and extract concessions from external powers that are competing for influence, while trying to remain neutral. Army special operations forces both enhance U.S. credibility to induce the cooperation of uncommitted actors and mitigate the friction inherent in depending on partners to achieve national-security objectives.