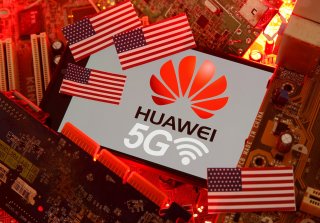 The year 2020 was a difficult one for Huawei. In August, the Trump administration imposed new restrictions aimed at depriving Huawei access to computer chips made with U.S. technology. At the same time, the company found itself under growing pressure in Europe. The United Kingdom, France, Sweden, Poland, and Romania all banned Huawei from participating in their fifth-generation (5G) mobile networks. The one country where Huawei continues to receive a warm welcome, however, is Russia. That’s where the Chinese telecommunications giant held its annual partner conference on Tuesday—in Moscow. Speaking before an audience of Russian information and technology (IT) entrepreneurs, Huawei’s regional executives boasted that last year, the company worked with over one thousand partners to implement more than four thousand projects in Russia. They also revealed that the company certified three hundred Russian specialists and opened thirty-eight new information and communications academies in the country, which will provide free training seminars to Russian university students.

Huawei’s interest in Russia is nothing new. Over the past several years, Huawei has shifted investments and operations to Russia to counter growing tensions with the West. In the process, the Chinese tech giant has emerged as the linchpin in a burgeoning technological partnership between Moscow and Beijing.

“The results of this partnership are overwhelmingly provided by Huawei,” said Samuel Bendett, a research analyst at the Center for Naval Analyses in Washington DC. “This is actual pedal to the metal, actually investing in Russia, actually seeing some level of results already.”

Since 2014, Huawei has seen Russia emerge as its fastest-growing market, with average sales increasing by an average of 51 percent per year. The Chinese telecommunications giant has over thirteen hundred Russian corporate customers and its smartphone brands have consistently dominated sales charts in Russia over the past several years. The company is eyeing a major expansion in Russia, with plans to open fifty new stores across the country in 2021, up from the current number of eighteen. Huawei is also rapidly diversifying its portfolio in Russia, all the while forming partnerships with local power players. In June 2019, Huawei and Russian telecommunication giant MTS agreed to build a 5G network in Russia. Last March, the company joined forces with Sberbank, Russia’s largest bank, to launch a new cloud platform aimed at Russian businesses. In October, Huawei signed a deal to help state-owned company Avtodor build roadways capable of supporting autonomous vehicles.

Perhaps most importantly, however, Huawei is ramping up its research and development (R&D) operations in Russia. In August 2019, Huawei announced that it would build three new R&D centers in Russia and hire fifteen hundred Russian R&D staffers by 2025, almost quadrupling the size of its R&D operation in the country. The company has also formed partnerships with over twenty leading Russian universities and research institutions.

For many in Russia, Huawei’s growing influence in the country is both a potential blessing and a curse. Valentin Makarov, president of Russoft, an influential software developers association, argued that cooperation with Huawei and other Chinese tech giants presented Russian firms with an opportunity to expand into global markets, and potentially develop new technological solutions that would be “without parallel” in the United States and Europe.

But Makarov also offered a word of caution. “There is a risk that dominant, global Chinese companies like Huawei and Alibaba can come to Russia and treat us as a younger brother,” he said. “Russia cannot become a younger brother of China, and this is not even about great power status, this is about keeping the nuclear weapons parity. Being a younger brother presents a great risk for internal and external instability.”

Huawei entered Russia decades ago. The company opened its first office in Russia in 1996. It was its first office outside of China and Hong Kong. In interviews, Huawei’s founder and CEO Ren Zhengfei has often spoken highly of Russia’s technological potential and even credited a young Russian researcher for helping the company achieve a breakthrough in developing 3G capabilities.

The outbreak of the Ukraine crisis in 2014, and the subsequent deterioration in relations between Russia and the West, created new opportunities for Huawei. In response to United States and European sanctions, Russian president Vladimir Putin signed a series of laws aimed at technologically decoupling Russia from the West. At the same time, the Kremlin has sought to boost Russia’s tech sector with generous tax cuts and a pledge to quadruple IT investments. Yet despite these efforts, Russia has not been able to fully replace Western technologies with domestic alternatives. Moscow’s solution has been to turn to Huawei as a world-class, but more geopolitically reliable supplier of hardware and cutting-edge technologies.

“Russian companies are looking for more secure technology systems that will not fall under some future sanctions regime, and where they can hope to have access to technological upgrades, maintenance, and next-generation tasks,” said Alexander Gabuev, a senior fellow at the Carnegie Moscow Center.

Russian officials are well aware that Huawei could obtain sensitive personal data from its Russian customers through backdoors in its networks, Gabuev explained, but they viewed that risk as a “lesser evil” than having Western companies gain access to such information. “The difference here is that the Russian security state believes that the West is after regime change in Russia and that it may resort to disrupting the country's digital economy in order to cause socio-economic turmoil,” he said. “By contrast, they believe that China may be after intellectual property theft, but definitely not regime change.”

Huawei has also had its fair share of difficulties with the West. In May 2019, the Department of Commerce banned U.S. companies from doing business with Huawei over espionage concerns. Since then, Washington has launched a global campaign to dissuade its allies from allowing Huawei to participate in their fledgling 5G networks. One way Huawei has sought to offset this growing pressure is by pivoting to Russia, explained Jeffery Towson, a private equity investor and professor of investment at Peking University in Beijing.

“Huawei knows that it can’t get into the United States, Australia, Japan, or much of Europe because of the political situation,” he said. “So, if Huawei wants to be a global player, then it needs to decide which markets it can win in, and Russia is probably pretty high on that list.”

Towson added that Russia offered Huawei a more developed digital market than that of many other countries, with a majority of Russians owning smartphones, cheap data plans, and credit cards. “If you go to other parts of the world you're not going to see that,” he said.

Another asset is Russia’s legacy in scientific and mathematical research. According to a 2016 survey of 1.5 million IT specialists by HackerRank, a leading tech platform, Russia and China ranked as the two countries with the best programmers in the world. Yet despite this high research potential, many U.S. and European tech companies have been reluctant to set up R&D operations in Russia in recent years due to rising geopolitical tensions. Some of them have even downsized their existing operations. That has presented an opportunity for Huawei, which it has exploited. “Huawei was able to walk into this abandoned field and scoop up all this huge potential without any serious competition,” said Makarov of Russoft. “This was a big victory for Huawei.”

Already, Russian engineers are helping Huawei find ways to reduce the burden of U.S. sanctions. For example, Russian programmers are reportedly playing an important role in helping Huawei develop its Harmony operational system (OS), which is meant to replace Google’s Android OS. Developing Harmony OS has been a top priority for Huawei ever since Google suspended its Android license in 2019 to comply with the Trump administration’s sanctions.

Huawei’s eagerness to invest in Russia has also won it support from the Kremlin. In June 2019, Putin lambasted Washington’s decision to blacklist Huawei, calling it an effort “to unceremoniously push [Huawei] out of the global market.” But some Russian tech industry insiders argue that Huawei’s activities in Russia are not as benign as they seem. Sergey Karelov, founder and chief technology officer at Russian IT consultancy Witology, insisted that the development of Russia’s tech industry would suffer if top Russian programmers continued flocking to Huawei.

“Elite IT specialists are a scarce resource, so any time you have half of that modest pool of talent go elsewhere—whether somewhere abroad or just to work for a Chinese company—that's a big loss,” he said.