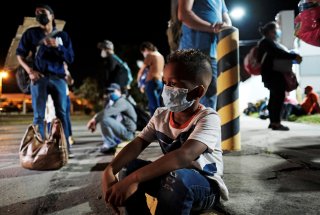 Earlier this week, Secretary of State Antony Blinken presented the forty-fifth Annual Country Reports on Human Rights Practices, prepared by the Bureau of Democracy, Rights and Labor. America evaluates the progress—or regression—of rights around the world. It is a vital testimony to the U.S. commitment to promote human rights everywhere.

In his remarks, Blinken denounced some of the most recent egregious human-rights violations: the ongoing Uighur genocide committed by China in Xinjiang, attacks on oppositional politicians and journalists in countries like Russia, Uganda and Myanmar, and last week’s assault by the Syrian regime on the Al-Atareb Hospital in Aleppo, leaving at least seven dead. This is a somber listing, sad evidence that the cause of human rights is losing ground.

Because of this human-rights crisis, Blinken’s predecessor, Mike Pompeo, convened the Commission on Unalienable Rights. The core of that commission’s report reaffirms the centrality of rights in American foreign policy—relatively neglected during the Obama administration--the importance of fulfilling all treaty obligations concerning rights, the urgency of leading by example through domestic respect for human rights, and the need to work with allies. Blinken might in fact agree with the commission report on these and many other recommendations.

Unfortunately, he could not pass up the opportunity for a snarky dismissal of the commission, which he erroneously calls a “committee.” In particular, he misattributes to the commission the notion that there is a hierarchy of rights, among which the government might pick and choose. Nothing could be further from the truth. Repeatedly the report underscores the interdependence and universality of all rights. Whoever prepared the secretary's remarks evidently had not read the report.

There is, however, a complexity that the commission report recognized and that Blinken glosses over: international law and the human-rights community do in fact differentiate between two types of rights, i.e., between non-derogable rights that allow for no exceptions and derogable rights that might be suspended in states of emergency.

For example, there are no circumstances that can ever justify genocide: protection from genocide is an absolute human right. In contrast, mankind is now living through a period in which most people have accepted peremptory curtailments of the right to assembly, the right to travel and the right to gather for worship.  Whether or not these restrictions on liberty were, in fact, successful in thwarting the spread of the pandemic, these violations of some of American rights surely do not reach the level of genocide or torture. So even as some people insist on the importance of defending all rights, distinctions like these are undeniable.

In addition, the report grapples with the unavoidable problem of how to square the pursuit of rights with other goals of U.S. foreign policy, in particular national security concerns. Blinken simplistically ignores this persistent challenge, as if a never-flinching insistence on rights were the only dimension of diplomacy. Yet his own remarks prove the opposite, revealing how commitment to rights is being bent to meet other policy needs.

For example, Blinken rightly prides himself on “the Khashoggi ban,” the sanctioning of seventy-six Saudi officials linked to the assassination of journalist, Jamal Khashoggi. Yet the intelligence community has also implicated the Saudi crown prince, Mohamed bin Salman. If, as Blinken asserts, human rights should never be qualified, then he should explain why there is no sanctioning of the crown prince. The answer is clear: the United States has to maintain relations with the Saudi leadership and is, therefore, willing—wisely willing—to mold ethical principles to political pragmatics. Blinken is less than candid when he pretends that compromises will never mar a Biden administration foreign policy which, as the stock phrase goes, puts human rights back at the center.

A second departure from principle involves the tragically analogous case of the journalist Ruhollah Zam, a powerful voice for oppositional forces in Iran. After serving a sentence in Tehran's notorious Evin prison, Zam went into exile in France but was tricked into traveling to Iraq where he was turned over to the Iranian Revolutionary Guard, taken back to Iran and quickly executed on Dec. 12, 2020.

The Trump administration denounced the Zam killing, as it did the murder of Khashoggi. Yet the Biden-Blinken team has only pursued sanctions against Saudis; it has done nothing to punish those responsible for the murder of Zam—although the line of responsibility certainly runs far up the chain of command through the Iranian intelligence services and probably to the Supreme Leader Ali Khamenei. Why not sanction him? Blinken should explain why his State Department cares less about the murder of journalists in Iran than murders by Saudi operatives.

The answer, again, is that the pursuit of human-rights principles is being shaped in practice by certain realpolitikal considerations. As the Biden administration continues to try to woo the recalcitrant regime in Iran, it is making the strategic choice to reduce points of conflict. Justice for Ruhollah Zam is therefore sacrificed in order to pursue the Joint Comprehensive Plan of Action agenda. For the same reason, the Blinken State Department ceased designating the Houthis in Yemen, who are an Iranian proxy force, as terrorists. In his diplomatically phrased statement, Blinken pointed to the violence in Yemen but referred only to “parties in that country's conflict,” rather than naming the Houthis directly. Why irritate the Iranians? By coincidence on the same day, press reports circulated news that the allegedly no-longer-terroristic Houthis effectively expelled the last few members of the ancient Yemenite Jewish community. Yemen is now judenrein. Any comment, Secretary Blinken?

Despite Blinken’s unwillingness to address the tension between deontological rights and utilitarian policy, his overall commitment to rights deserves applause, and not only because the substance of his remarks is largely consistent with the commission’s report. This overlap in rights thinking across the two administrations involves one other particularly salient point. The commission faced strident criticism specifically for grounding the United States’ obligation to a human-rights foreign policy in a distinctively American tradition, the notion since the Declaration of Independence that rights are “unalienable.” Opponents of the Commission complained that grounding rights in an American credo puts us on a slippery slope to cultural relativism, undermining aspirations to the universality of rights. It is therefore particularly noteworthy that in Blinken’s remarks he does not hesitate to justify U.S. rights advocacy explicitly in terms of a distinctive American tradition. “Standing for people’s freedom and dignity honors America’s most sacred values.” Amen.