The Importance of Being China 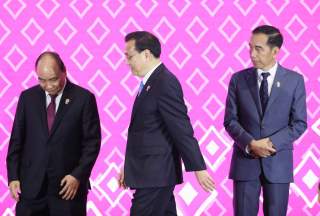 “China is a big country and other countries are small countries, and that's just a fact,” thundered China’s then Foreign Minister Yang Jiechie almost a decade ago during a high-stakes security forum in Vietnam. This was the beginning of a new, assertive China, openly and coercively carving out a new regional order with Chinese characteristics.

During his visit to the Association of Southeast Asian Nations (ASEAN) rotational chairman, the Chinese chief diplomat, and former ambassador to the United States, directed his remark threateningly at smaller neighboring states, specifically Singapore. Only earlier, Hillary Clinton, who was the U.S. Secretary of State at the time, upended regional diplomatic affairs by directly injecting the United States to the intensifying South China Sea disputes. “The United States has a national interest in freedom of navigation, open access to Asia’s maritime commons and respect for international law in the South China Sea,” Clinton said.

Incensed by a large number of attending nations, at least twelve out of twenty-seven, including Singapore, openly backing up Clinton’s statement, Jiechie characterized the affair as a conspiracy and staged a diplomatic coup, which is tantamount to “an attack on China.” Over the next decade, an epic battle ensures in the South China Sea, the world’s maritime artery, as China, in defiance of international law and everyone’s expectations, and embarks on a massive geoengineering campaign, which upends the regional strategic landscape.

As Vietnam prepares to take over the chairmanship of ASEAN once again next year, it has upped the ante by threatening to take China to an international court. At the very least, the fierce Southeast Asian country has signaled that it won’t be a pushover, vowing to rally international support against Beijing’s aggressive behavior in adjacent waters, including a months-long naval standoff within Vietnamese waters this year.

Birth of a Neo-Imperial China

At first, the Obama administration tried to draw the line in the waters. With characteristic firmness, Clinton emphasized the need for a “collaborative diplomatic process” following “very productive” exchanges with regional partners. She made it clear that Washington will “oppose the use or threat of force by any claimant.”

Tensions hit a new high when Beijing disinvited former Defense Secretary Robert M. Gates. After that, both sides suspended institutionalized military-to-military talks. The following year, the United States zeroed in on China’s expansive claims under the so-called “nine-dashed line” claims across the South China Sea, pressuring Beijing to clarify its precise geographical extent and legal basis. And what was China’s response? Open defiance beyond the United States’ wildest imagination.

Within a span of months, China, upon Xi’s order in late-2013, transformed a whole host of rocks, atolls, and sandbars into gigantic artificial islands, now hosting state-of-the-art weapons systems, including surface-to-air-missiles (SAMs) and full-sized kilometers-long airstrips. For China, the disputed area represented a “core interest”, far surpassing America’s “national interest” in freedom of navigation and overflight in the South China Sea.

The early years of the decade, particularly 2011 and 2012, also saw a dramatic escalation in maritime tensions. During that period, China directly challenging Vietnamese and Philippine claims and fisheries activities in the area. A months-long standoff over the Scarborough Shoal between Manila and Beijing, which eventually occupied the disputed area well within the Philippines’ Exclusive Economic Zone, marked the culmination of this new trend in regional geopolitics.

Perturbed by China’s brazen actions, the Philippines, a U.S. ally, went so far as taking China to international court over the disputes in 2013. In response, an undaunted China, which rejected any third-party arbitration efforts, doubled-down on its claims in the area. Admiral Philip Davidson, head of U.S. Indo-Pacific Command, aptly described China’s literal, unparalleled and brazen building of facts on the ground as a “Great Wall of SAMs”, which directly threatens freedom of navigation and overflight across Asia’s maritime heartland.

In contrast to most of its neighbors, including the Philippines under the Beijing-leaning President Rodrigo Duterte, Vietnam has signaled a tougher stance against China. As the Southeast Asian country prepares to once again, after a decade, take over the chairmanship of the Association of Southeast Asian Nations (ASEAN) next year, it has upped the ante by threatening a new strategy in the South China Sea.

Last month, Vietnam’s Deputy Foreign Minister Le Hoai Trung openly warned that Vietnam is seriously considering lawfare against China, emphasizing how his country won’t just sit idly by as the Asian juggernaut bullies its smaller neighbors and carves out new territory in the high seas and well into the waters of other nations with virtual impunity. Underscoring Vietnam’s multifarious options, the Vietnamese diplomat mentioned how “fact-finding, mediation, conciliation, negotiation, arbitration and litigation measures” are well within the country’s disposal against China.

In October, an influential Vietnamese think tank hosted a high-profile public forum where participants encouraged lawfare against China in order to “identify who is right and who is wrong in this matter.” And there are reasons to be optimistic. In particular, Vietnam has been encouraged by the Philippines’ successful effort at legally challenging China’s expansive claims, namely its “historic rights” over the Nine Dashed Line area covering much of the South China Sea and its aggressive reclamation and militarization of disputed land features through compulsory arbitration under the United Nations Convention on the Law of the Sea (UNCLOS).

It is no wonder that Vietnamese officials have emphasized how “The UN Charter and UNCLOS have sufficient mechanisms for us to apply those [legal] measures.” Similar to the Philippines, Vietnam can use compulsory arbitration to reinforce its sovereign rights within its own Exclusive Economic Zone and continental shelf, question China’s expansive claims, and push for international arbitration sans mutual consent.

What is often missed in the analysis of the South China Sea disputes is how, following the Philippines’ arbitration victory against China, Beijing has changed tact by not mentioning the much-dreaded Nine-Dash Line in its official statements in recent years, while opting for alternative quasi-legal positions, including the much-ridiculed “four sha” (Chinese for sand) doctrine and claims of “discovering” a new map, in order to defend its expansive claims in the area. This shift in China’s legal-diplomatic language shows the importance of arbitration in defending smaller claimant states’ legitimate and lawful interests.  In short, the Philippines’ lawfare shamed China to recalibrate its position on the South China Sea.

Alternatively, Vietnam can sue for conciliation commission (Article 298 and Annex V, UNCLOS) to address overlapping claims.  Perturbed by the prospect of an additional arbitration case, China has warned against “complicating” the disputes, with Geng Shuang, a spokesperson for the Chinese Ministry of Foreign Affairs, threatening against “actions that may complicate matters or undermine peace and stability in the South China Sea as well as our bilateral relations.” Clearly, Vietnam has leverage over China and should be thankful for the Philippines’ brave precedence.