Is India an Asset or a Liability to America’s Indo-Pacific Alliance? 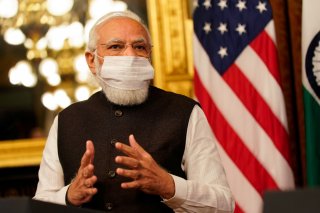 India has begun receiving S-400 missiles from Russia despite the risk that it will be sanctioned by the United States, its ally and trading partner. There is a possibility that in the long-term interest of maintaining good relations with India, the United States may find some way to get around this. Already U.S. senators John Cornyn (R-TX) and Mark Warner (D-VA) are lobbying President Joe Biden to find a national security exemption. However, last year when Turkey pursued the same path, the United States did impose sanctions on a longtime NATO ally.

The United States is in the process of building a robust Indo-Pacific alliance to serve as a forward defense against China and to keep the Indo-Pacific region open for trade. The alliance is also projected as a bulwark of democracies against authoritarianism. A standard operating procedure of U.S. foreign policy to use the defense of democracy as a justification for liberal imperialism. It is the consequence of what during the Obama administration was touted as the “pivot to Asia.”

The Quadrilateral Security Dialogue (Quad) is a formidable alliance. It includes two nuclear powers (the United States and India), three of the world’s five most powerful militaries, three of the top six economies of the world and a combined GDP of over thirty trillion dollars—which is more than double that of China. If the alliance holds, it will not only prevent China from dominating its own neighborhood (South and East Asia) but also perhaps succeed in containing Beijing and moderating its behavior.

Both India and the United States recognize the strategic advantages and economic benefits of a close India-U.S. partnership. For India, a military alliance with the United States can be a lifesaver given China’s increasingly assertive regional posture, which has already resulted in two military skirmishes in 2017 and 2020. For the United States, Washington gains an ally that is a nuclear power, a trading partner that is an up-and-coming economic juggernaut, and one which is as highly committed to ensuring that China does not dominate the Indo-Pacific region. While Japan and Australia have been U.S. allies for decades, India, the fourth member of the Quad, is a new member of the club of nations who can claim that they are U.S. allies.

But India is a problematic ally—one that could not only unravel the alliance but also undermine U.S. China policy. I am not alluding to India’s tactics of purchasing Russia’s S-400 missiles, which in itself is a signal that India is prepared to hurt its developing partnership with the United States. Contrast this with the decision of the other Quad partner, Australia, that has risked the ire of France to buy nuclear submarines from the United States and the United Kingdom. This move strengthened both Australia’s military capabilities and the bonds that tie Canberra to the United States. India’s S-400 decision clearly signals that it is not in the same league as a U.S. ally as is Australia.

India as an ally brings a lot of baggage to the alliance besides its reluctance to become fully plugged into U.S. defense systems. India’s democracy is at risk of further backsliding: Hindu nationalism is undermining India’s secular and democratic credentials. The Hindu nationalists are on a warpath against India’s constitution and its minority population. How can a nation that wages war on itself be a good ally in a war of great powers?

Since coming to power for a second time in 2019, Hindu nationalists led by Prime Minister Narendra Modi have made laws and policies that target Indian Muslims with a clear purpose of politically marginalizing them and culturally rendering them invisible. The lives, property, and jobs of Muslims are in jeopardy, and they have become the new untouchables of India. Indian Muslims number nearly 200 million and oppressing them requires enormous state resources. But above all, it moves India further and further away from democracy. Already India has slipped in democratic ratings and the U.S Commission on International Religious Freedom has recommended that India be designated as a country of particular concern for its dismal record.

If the United States persists in casting the U.S.-China “competition” in terms of autocracy versus democracy, then it cannot ignore the decline of democracy at home or in allied nations. Just as Biden endeavors to rebuild democracy at home, he must also insist that India make a u-turn and return to its constitutional essence of a secular democracy. An undemocratic India will undermine the moral basis of the Indo-Pacific strategy.

The United States and India need to have a serious conversation about the containment of Hindu nationalism, which is a bigger threat to the viability of the Quad and America’s Indo-Pacific strategy than India’s shopping habits.

U.S. foreign policy has a history of hypocrisy. For decades, it has claimed that democracy promotion and human rights are key elements of its foreign policy, but for decades it has supported and still supports monarchies, military occupation, and dictatorships in the Middle East. The United States has paid a heavy price in terms of blood and resources in the Middle East as a direct cost of its hypocritical policy. I hope it will not repeat the same mistake in the Indo-Pacific theatre.

Dr. Muqtedar Khan is a Professor in the Department of Political Science and International Relations at the University of Delaware. He is the author of the award-winning book Islam and Good Governance: Political Philosophy of Ihsan (Palgrave Macmillan, 2019). His essays have appeared in The Wall Street Journal, The New York Times, The Washington Post, The National Interest, The Conversation, The Diplomat, The Indian Express, Outlook India, The Wire, and many other publications worldwide. He hosts a YouTube show called Khanversations and his website is www.ijtihad.org. He Tweets @MuqtedarKhan.