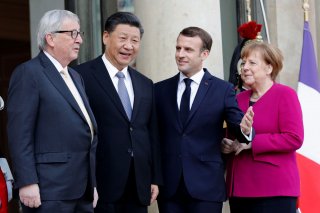 IT IS now widely accepted that the United States is in a great power competition with China, and that allies and partners are pivotal in this struggle. President Joe Biden ran on a platform emphasizing their elemental importance, and his administration has pledged to continue the Trump administration’s tough line on China. The question that now confronts Washington is how to realize the potential advantages afforded by this network.

That won’t be easy. It’s one thing to be linked with such a far-flung group that in aggregate constitutes enormous power; it is quite another thing to convert that potential into meaningful international political influence. Indeed, the intensity of the burden-sharing controversies in recent years—including with some of Washington’s strongest traditional allies like Germany—shows how difficult it is to turn the latent advantages of this network into real leverage, let alone action. And Europe’s Comprehensive Agreement on Investment with Beijing, concluded just before Biden’s inauguration, is only the most prominent example that his election has not wiped away many of the real divergences among Washington and its allies.

The Biden administration appears to have a theory of the case for how to turn the potential of this network into real leverage and action. This is a “global, values-based” model of alliances and partnerships. Biden himself laid out this approach in his February speech at the State Department and then even more clearly and pointedly at the Munich Security Conference later that month. In the latter speech, Biden contended that “we are in the midst of a fundamental debate about the future and direction of our world … [between those who argue] that autocracy is the best way forward … and those who understand that democracy is essential.” He invited “our fellow democracies … to join us in this vital work,” arguing that “our partnerships have endured and grown through the years because they are rooted in the richness of our shared democratic values.” Emphasizing his “belief that – [with] every ounce of my being – that democracy will and must prevail,” he contended that, “if we work together with our democratic partners with strength and confidence, I know that we’ll meet every challenge and outpace every challenger.” And Secretary of State Antony Blinken has repeatedly referred to the key divide in international politics as a competition between “techno-democracies and techno-authoritarians”—an ideological divide in which “techno-democracies” would be arrayed together on one side.

National Security Advisor Jake Sullivan, meanwhile, has laid out the logic behind this approach in illuminating remarks at the U.S. Institute of Peace in late January 2021 as well as in a number of articles he authored before returning to government, particularly a piece he coauthored in Foreign Policy in May 2020. Sullivan recognizes that Washington’s relations with its confederates have to change, and he has a particular vision how. In his January remarks, Sullivan emphasized the importance of getting “in lockstep with democratic allies and partners” to generate “a chorus of voices that can drive the argument … to stand up for a certain set of principles.” Following from this logic, Sullivan indicated that no relationship would be “more critical than the transatlantic alliance,” and that “getting on the same page with the Europeans” would be the administration’s focus. Doing so would create what, quoting Dean Acheson, he called “situations of strength” relevant to the competition with Beijing.

Following this logic, the Biden administration’s approach appears likely to focus on the world’s democracies—particularly the leading ones of Europe—and, based on their (at least somewhat) shared values with the United States, to coordinate meaningful common action toward China. Biden himself has trumpeted the idea of a “Summit of Democracies,” contending in February that this would “rally the nations of the world to defend democracy globally [and] to push back the authoritarianism that has advanced.” Meanwhile, a slew of articles by Biden appointees and influential outside voices have argued for such an approach in a range of fields, from trade and technology to military posture and deployments. Put simply, the Biden team seems to be betting that democracies—wherever they are located—will align based on their shared values to stand up to the challenge of an authoritarian China.

The problem is that this approach will almost certainly disappoint and, if resolutely pursued, risks weakening U.S. links with many of the very countries that will be most key to confronting China—many of which are not democracies or are considered only “partly free” by institutions such as Freedom House. The basic flaw in this now ascendant U.S. approach is twofold. First, it mislocates the decisive arena of competition with China. The results of the competition with China will not primarily be determined by global political institutions and perceptions of our respective political systems but rather chiefly by the balance of hard economic and military power, especially in Asia. Second, it misidentifies the main reason countries will or will not collaborate with Washington vis-à-vis China. Exaggerating the role of “values” and ideology in international politics, it inherently downplays the salience of security and economic interests. This leads to an over-expectation of what democracies, especially in Europe, will do, while discounting the central importance of what other states, especially in Asia, need to do.

In practice, such an approach will at best lead to a strengthening of effort where Washington really doesn’t need it that much, above all in Europe. Washington needs help primarily in Asia, and Europeans are unlikely to be willing—let alone able—to make a major difference there. More likely, this approach will lead to limited results from Europeans without strengthening America’s position in Asia; even worse, a global approach centered around ideology is likely to inhibit cooperation with—if not alienate—the very countries that Washington needs to collaborate with in Asia and the Middle East. Bluntly, such an approach may strengthen Washington’s hand in international organizations that, while significant, are more driven by than drivers of international politics, while distracting or inhibiting it from the work of strengthening an anti-hegemonic coalition’s vital military and economic position in the primary theater: Asia.

In lieu of this, the United States should pursue an interest-based approach to its network of allies and partners. Washington can best pursue this course by concentrating its alliance and partnership-building efforts on where our interests, especially on security and economic matters, align with those of other countries. This more than anything means working with countries that share our fears of Chinese—or Russian or Iranian—domination. In this approach, shared values can play a valuable role as a supplement to our fundamental approach but should not be the focus or driver of Washington’s strategy. This means prioritizing strengthening our side of the hard power balance in Asia and relieving ourselves of burdens in other theaters, while focusing efforts with wealthy Europe vis-à-vis China where their interests will most immediately be impinged upon by Beijing—the economic realm.

HOW WOULD such an “interests-based” approach work? First and foremost, it would proceed from a recognition of the fundamental reality that the United States is no longer as powerful relative to other countries as it once was. More than anything else, this is due to the rise of China. Indeed, China’s economy is already larger than America’s according to purchasing power parity metrics and may exceed it in market exchange terms in the coming decade.

The United States therefore cannot do everything it needs to do in the international arena on its own. Accordingly, Washington must focus on what really matters. The paramount interest of the United States is to deny any other state hegemony over one of the key regions of the world, of which the most important is Asia.

This is not a merely theoretical problem. China is now becoming a superpower, and Asia is the world’s largest market. China is pursuing regional hegemony over Asia—and from that position ultimately more. Indeed, Beijing is already throwing its economic weight around to cow the states of Asia. At the same time, China is building a military fully capable of taking on the United States and its allies, and has shown its increasing willingness to brandish that instrument to try to bend others to its will. If China could gain predominance over Asia, it could exclude the United States from fair trade with this great market, severely weakening our economy, and use the ensuing power advantage it would gain over us to coerce us over our domestic affairs. Consequently, because of China’s unique power and Asia’s status as the world’s largest market, the threat of Beijing establishing hegemony over Asia must be the primary international concern for Washington.

The only way to prevent China’s hegemony over Asia is through a coalition of states collaborating to resist it. America is just not strong, let alone resolute, enough to check Chinese domination over Asia by itself. Fortunately, there is growing evidence that such a coalition is forming to check Beijing’s aspirations, centered around the United States, Japan, India, and Australia but also including other Asian and possibly some extra-regional states. But this very progress increases Beijing’s incentives to use its growing power—including its military strength—to short-circuit or pry apart this aborning coalition. Preventing this must be Washington’s top strategic priority.