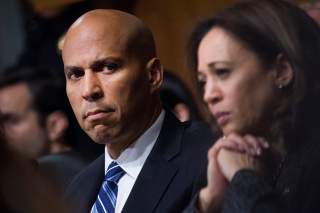 Democrats are running in 2020 to push foreign influence and lobbyist money out of Washington—or so they say. But many of the Democratic presidential front-runners accepted large sums from known foreign agents when they were running for their current seats in Congress, a National Interest investigation has found.

Under the Foreign Agents Registration Act, also known as FARA, any American or American company that performs political activities—such as lobbying, public relations, or propaganda—on behalf of a foreign entity must register with the U.S. government as a foreign agent.

The National Interest cross-referenced FARA registrations obtained from the Department of Justice with 2016 and 2018 campaign finance records from the Federal Election Commission. Under federal elections law, all candidates for federal office must record the name, employer, and address of every donor.

"Yes, Dentons acts as lawyers and lobbyists for the Kurdistan Regional Government and we have worked on a variety of issues for them, as has been disclosed in our FARA reports.  Regarding Tulsi Gabbard, I did make a donation to her campaign in 2015, in my personal capacity.  I have not provided her with any support since then," Lurie told the National Interest.

Jonathan Mantz, principal attorney at BGR Government Affairs and a registered agent for both the government of Thailand and the KRG of Iraq, donated to two former Senate candidates who are now running for president. He gave $500 to the re-election campaign of Sen. Kirsten Gillibrand (D-N.Y.) just before registering as a foreign agent in 2012, and another $500 in 2015 to now-Sen. Kamala Harris, then attorney general of California and a Democratic candidate for Senate.

During her successful 2016 primary campaign, Harris took $1,000 from Justin Gray, who had been registered as a lobbyist for the Moroccan government since February 2014.

During the same campaign, five lobbyists from the Podesta Group registered as agents of Azerbaijan, India, Georgia, Kosova, Iraq, Japan, Somalia, and the Hong Kong Trade Development Council gave Harris’s campaign a collective $4,750. (Some of the donors were registered as agents of multiple foreign entities.) The first donation came in November 2012, followed by a cluster of donations in March 2015, and a final donation in October 2015, according to Federal Election Commission records.

The Podesta Group could not be reached for comment, as it went out of business in 2017.

Michael Smith, a partner at Cornerstone Government Affairs, gave Harris a little over $2,000 in July 2015. According to a FARA filing from January 2015, he had been under contract with the Embassy of South Korea to advocate a new professional visa category for South Koreans, and with the Sudanese opposition group Justice and Equality movement to “advocate on the security situation in Africa.”

Donald Pongrace, an attorney for Akin Gump Strauss Hauer & Feld LLP, registered as an agent of the Mining Company of Katanga in October 2013. According to his FARA filings, Pongrace’s task was to lobby for more U.S. food aid and a new consulate in one region of the Democratic Republic of the Congo. He donated $2,700 to Harris’s campaign in September 2015. His colleague, Karen Goldmeier Green, who registered as a lobbyist for the United Arab Emirates in November 2012, gave Harris another $500 on the same day.

Since coming to office in 2016, the former prosecutor has “thrived” on the Senate committee investigating alleged Russian interference in the 2016 presidential election. Harris has accused Russia of targeting her presidential campaign.

But she received $1,000 from former Assistant Secretary of Commerce Andy Manatos, just five days after he registered in May 2016 as a foreign agent for his “advice and lobbying directed toward the United States Congress and Administration on behalf of VTB Group regarding the imposition of sanctions by the US government on Russian-affiliated banks.”

The main shareholder of VTB Group is the government of Russia.

“I’ll have to check and get back to you. Thank you,” Manatos told a reporter in May 2018, when asked about the VTB Group contract. He did not respond to an August 2019 request for comment from the National Interest.

Elsewhere in the post-Soviet space, Harris took $2,700 in January 2016 from Ben Barnes, who had signed a contract to “promote the economic and geopolitical interests of the government of Ukraine,” according to a FARA filing in October 2015.

The next month, the now-Senator accepted $500 from Thomas Spulak, a King & Spalding lobbyist who signed a contract with Tajikistan in July 2015 to help undo Cold War-era human rights-related trade restrictions on the former Soviet republic. Just before registering as an agent, Spulak gave $6,700 to Hillary Clinton’s presidential campaign.

Joe Reeder registered as Greenberg Traurig LLP’s lobbyist for the KRG and the Government of Panama in July 2015. On his FARA filing, Reeder reported his political donations over the previous two months, including $2,700 to Hillary Clinton’s presidential campaign, and $200 to the failed Senate primary campaign of Joe Sestak, another 2020 presidential candidate.

Booker’s two Senate re-election campaign committees have received a total of $86,150 from employees of Greenberg Traurig LLP—more than any other 2020 candidate—making them the fifth-largest source of contributions for his Senate campaign. His presidential campaign has taken another $24,501 from Greenberg Traurig LLP employees. Some of these donors may not be affiliated with the firm’s foreign lobbying operations, as Reeder is the only one among them registered as a foreign agent.

In the time since Booker’s last election, Greenberg Traurig LLP has represented the governments of Turkey and Timor-Leste, as well as the Mexican agriculture ministry, the Kazakh justice ministry, two joint-stock companies from Belarus, a Libyan research institute, a controversial state-sponsored NGO from Azerbaijan, and a Guatemalan organization called the Association for the Rule of Law in Central America.

In a February 5 article, Foreign Policy described the Association for the Rule of Law in Central America as part of President Jimmy Morales’s efforts to escape a corruption investigation.

“The accusations against Morales were a work-product of the [Comisión Internacional Contra la Impunidad en Guatemala], an international organization that was trying to overthrow him. The story of the CICIG is quite remarkable and has not been adequately told,” wrote David Landau, founder of the Association, in response to an email from the National Interest. “It arrived in Guatemala toward the end of George W. Bush's presidency as an anti-corruption watchdog and quickly became the very threat to democracy that it had been created to dismantle.”

“Now that [president-elect Alejandro] Giammattei is succeeding to the presidency, it's a fair bet that the CICIG—which until lately and for a decade had been the central actor of Guatemala's politics—will not be welcomed back,” he continued. “As Trump likes to say, we'll see what happens.”

Greenberg Traurig LLP employees gave to other Senate candidates who would later run for President, although none of the donations came from employees who are registered as foreign agents.

Harris received $4,700 from lawyers at the firm, all but one of them from Harris’s home state of California.

Greenberg Traurig lawyers also donated $3,077 to former Texas representative Beto O’Rourke (D-Tex.) during his 2018 longshot campaign to unseat Sen. Ted Cruz (R-Tex.). All of these donations came after the spring of 2018, after O’Rourke became a nationwide media sensation. O’Rourke’s campaign forwarded a request for comment to his press team, which has not responded as of press time.

In the past year, Greenberg Traurig LLP has renewed its registration as an agent of Turkey, the KRG, the Mexican agriculture ministry, and Association for the Rule of Law in Central America. It also picked up two new clients from West Africa: the Republic of Liberia, and King Otumfuo Tutu II of the Ashanti people in Ghana.

“The Association for the Rule of Law in Central America is per se not active, though its members are still working for the same goals that inspired its creation,” Landau told the National Interest. “To my knowledge, the ARLCA's association with Greenberg Traurig concluded many months ago and shows no sign of re-starting.”

Turkey, Azerbaijan, and the KRG are closely aligned on Middle East issues. Booker’s campaign also has connections to Mercury Public Affairs, which is registered as an agent making “informational materials” for Turkey and the Government of National Accord, a Turkish-backed faction in the Libyan Civil War.