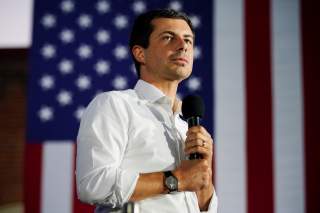 Democratic presidential candidate Pete Buttigieg has received over $9,000 from foreign-linked lobbyists, including over $7,000 from active foreign agents, a National Interest investigation has found.

Buttigieg, who has come under heavy scrutiny for his lobbyist connections, promised back in April to refund $30,0250 in lobbyist donations from thirty-nine individuals. His campaign did return some of the donations that it received from foreign agents, but Buttigieg broke his promise when he decided to keep at least five thousand dollars from a registered foreign agent, the National Interest found.

“We do not accept contributions from registered federal lobbyists, corporate PACs or the fossil fuel industry—and all registered agents have previously been refunded,” Buttigieg’s campaign told the National Interest in an email. “As President, Pete will enact critical campaign finance reforms to restore faith in our Democracy, including strengthening the [Federal Election Commission] and pushing to overturn Citizens United and Buckley v Valeo.”

Under the Foreign Agents Registration Act, also known as FARA, any person or company that performs political activities in the United States—such as lobbying, public relations, or propaganda—on behalf of a foreign entity must register with the U.S. government as a foreign agent.

And under federal election law, all candidates must file the name, address, job, and employer of anyone who donates more than two hundred dollars with the Federal Election Commission. The last quarterly deadline to file this information was September 30.

“Nobody is confessing to making these contributions on behalf of a foreign government or a foreign client,” said Ben Freeman, director of the Foreign Influence Transparency Initiative at the Center for International Policy. “What we found, historically, is that there’s definitely a very strong correlation between who [lobbyists] meet with on behalf of their clients, and who they’re making contributions to.”

“It’s almost like a bet, a bet you're placing on future influence,” Freeman told the National Interest. “If that candidate ends up winning, then you’re on the record as being a donor to that campaign, who helped them get there.”

“On the flip side, even if you make one of these contributions and that candidate doesn't make it all the way, or drops out soon, they at least know or there's at least a record that you supported that effort,” he added. “If they go back to the Senate or they go back to the House, they’re more likely to grant you a meeting, if you have made those contributions to their presidential campaign.”

Buttigieg’s largest foreign-linked donations came from Alexander Slater, managing director of the Clyde Group, who donated $5,350 in March and April. Slater registered as an agent of the Government of Scotland in January 2019, although his FARA filing claims that the Clyde Group “did not make any contacts with any U.S. public officials, media, or think tanks during the performance of its services.”

FEC records do not indicate that Buttigieg returned any of the money to Slater. Slater did not respond to a request for comment.

His second-largest foreign-linked donor was Zack Marshall, director of Prime Policy Group, who gave Buttigieg’s campaign over $1,000 over a three-week period in April.

Prime Policy Group has represented a variety of foreign clients. Two of them are Turkish-backed factions in Middle Eastern civil wars, the Turkish Republic of Northern Cyprus and the Government of National Accord of Libya.

Marshall registered to represent the Government of National Accord on May 29, just over a month after his last donation to Buttigieg. Buttigieg’s campaign returned $850 to Marshall after swearing off lobbyist donations, but FEC records do not indicate that the campaign refunded any more before the September 30 filing deadline.

"All contributions to Mr. Marshall have been refunded, including the $157.89 contribution, which resulted from a merchandise purchase. It doesn't show up on FEC because at the time of the refund in [the third quarter of the fiscal year], he was under the aggregate contribution itemization limit of $200," the Buttigieg campaign claimed.

“Since there have been different signals from Washington, whether it’s out of the White House, or via diplomatic engagement, [the Government of National Accord] is looking to shore up its position as the internationally-recognized government,” explained Nate Wilson, Libya Country Manager at the United States Institute for Peace. “So it engages Washington to try and gain support from various stakeholders.”

Buttigieg’s campaign also took money from a registered agent of Qatar, a close ally of Turkey and the Government of National Accord.

Matthew Putorti, an attorney at Pillsbury Winthrop Shaw Pittman LLP, registered as an agent of Qatar on February 23, 2019. In March and April, he donated $750 to Buttigieg’s campaign, as well as $250 to former Rep. Beto O’Rourke.

Buttigieg and O’Rourke eventually returned all of the money.

O’Rourke’s staff could not be reached for comment, as he ended his campaign on November 1.

Putorti’s contract with Qatar ended on July 31, according to FARA records.

“I voluntarily terminated my registration under the Foreign Agent Registration Act effective July 31, 2019. I was initially registered out of an abundance of caution, in advance of a client meeting I ultimately did not attend,” Putorti told the National Interest. “My contributions to these candidates were not accepted and were instead returned to me.”

Buttigieg also took $1,000 in small donations from consultants for Singapore, Japan, Korea, and the Democratic Party of Moldova at the time. His campaign returned all of this money.

It may seem like a drop in the bucket, but Freeman emphasized that foreign lobbyist donations can have an outsized effect.

“Is a thousand dollars or a two-thousand dollar contribution—is that going to make or break a campaign? Absolutely not,” Freeman said. “But is it going to increase the likelihood that that lobbyist could get a meeting with a member of Congress, or could get a meeting with a staffer for that member of Congress. And the answer to that is, absolutely!”

Over the next two months, Crowe’s firm exchanged emails several times with Harris’s congressional staff on behalf of South Korea, according to FARA filings. There is no indication that Harris’s staff responded positively—and the campaign eventually returned Crowe’s money at the end of April—but the donation may have driven them to pay more attention.

A previous National Interest investigation found that Harris took thousands from foreign agents during her past congressional campaign.

Harris dropped out of the presidential race on December 3, 2019. Her congressional staff did not respond to a request for comment. Neither did Crowe.

“We found literally dozens of instances where, sometimes on the exact same day, they’re meeting with members of Congress on behalf of a foreign client, they’re making a campaign contribution to that exact same member of Congress,” Freeman told the National Interest. “You have to really, really relax your disbelief to believe those two things are not at all connected.”

“We know that these firms host big fundraisers for members of Congress, and these lobbyists that are working for these firms, they can help to organize these fundraisers for these members of Congress,” he added. “When you just look at campaign contributions coming from registered foreign agents, you’re only seeing the tip of the iceberg of the money that these folks can help to channel to these campaigns.”